When there were no roads to follow, the voyageur’s highway flowed through the wilderness of the Canadian Shield. In search of a short cut, those who forged our heritage routes: the First Nations, the explorers, the missionaries, the hunters and the traders charted thousands of kilometers of rugged waterways that connected a nation of many rivers and a river of many nations.

The spectacular beauty of the French River belies its precarious past. From the riverbank, a black bear watchfully eyes our passage as we paddle into his domain. Reaching our encampment we pull up the canoes, dutifully pitch tents and set a fire alight. As the sun goes down, so too does the temperature. Kindling here is as abundant as sand at the beach, and our fire blazes like we’ve just set it free. In one pot we cook wild rice and chanterelles. In another, sous vide duck, butternut squash, and cranberry sauce with maple syrup. A cold blanket of air descends upon us, and a few branches snap from the perimeter of the site. I take a deep swig of whisky from my flask, remember that bear, and acknowledge with resignation, “It’s a good thing we’ve tied the food up high, because we are not alone tonight.” 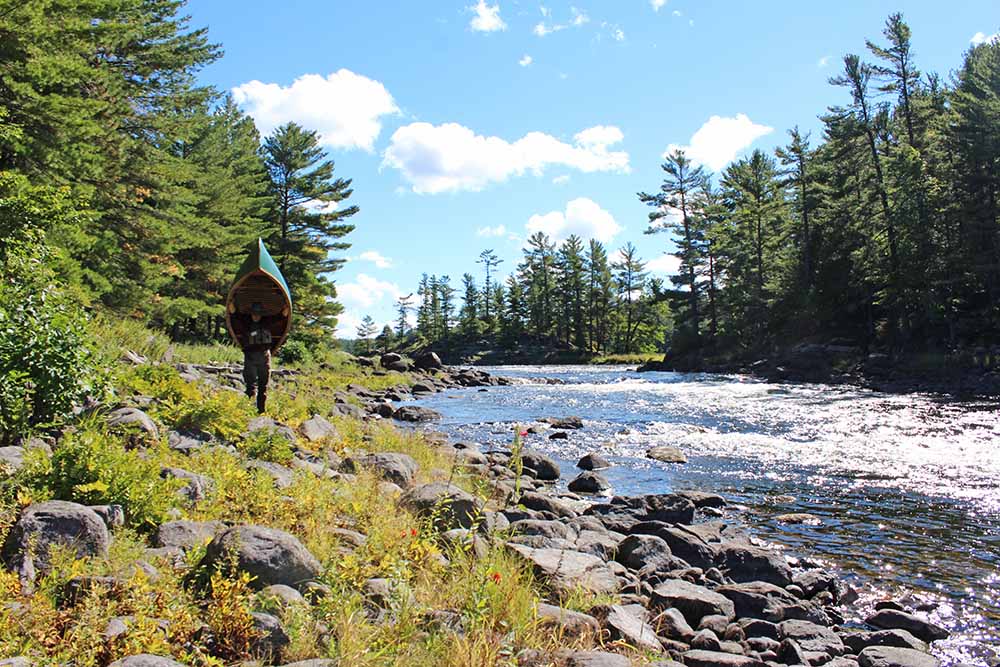 Unzipping my tent at dawn, I see my fellow tripper, Shawn James of My Self Reliance, has been up for a while. He’s already got a fire going and brewed a pot of coffee. The ground is wet. Twigs pop in the fire. In the quiet, we marvel at the crisp air and the lugubrious fog that envelops us like a thick cloud. The sun slowly pushes through, exposing a picturesque dreamscape of rocky inlets glistening in the morning dew. We pack up and paddle out.

The midday sun beams brightly and the water sparkles like diamonds. Glaciated rock juts out from dense pine growth. The river narrows and we catch speed, cutting rapids as we wind through a fast moving curve and the clean splash of water off the rocks. At the estuary we lay on soft granite that feels like a petrified Posturepedic mattress, and as the water softly rushes around me, I sink into deep relaxation. Under an endless blue sky we snack on pemmican and bannock. The rest of the world is so far away.

Following the sun we paddle further along the channel to our next campsite perched on a cliff. Surveying the quiet forest we can see for miles. After setting camp, Shawn builds a fire and calls out, “Hey, you better go get dinner.” From my canoe I cast a line and, in short order, catch two largemouth bass. As darkness sets in, stars come into focus like they were painted by one broad brush-stroke to infinity. Wonder-struck, we sit silently hypnotized by the cosmos.

Another day, another opportunity for communion with the energy and spirit of a nature we can only celebrate through immersion. The Ojibwe named this river from Lake Nipissing to Georgian Bay after the early French explorers who paddled it. Their trade route, Canada’s first designated heritage route, is vast and unspoiled—our protected resource, our history, our recreation; the envy of the world.