They’re at it again. From boys hitting the interior design books at Ryerson Polytechnic in the ’70s to men adding their well-respected names to Avenue Road, a new retail establishment created to showcase furniture design from Canada and abroad, where pieces by Yabu Pushelberg will sit alongside such international createurs as France’s Christophe Delcourt and Brazil’s Simone Coste, the interior design duo powerhouse is taking it up another notch. Toronto-raised George Yabu and Kitchener, Ont., native Glenn Pushelberg founded the firm in 1980 and, from their first major client, Club Monaco’s flagship store on Queen Street West, to their first hotel, the W in New York, to winning the James Beard Foundation Award for excellence in restaurant design to conceptualizing the new Avenue Road furniture flagship showroom in Toronto’s Leslieville neighbourhood, they’ve never looked back.

The last decade, in particular, has been a busy one. Garnering at least two awards a year since the turn of the Millennium, the team has continually been sought after. In October 2009, Architecture Interiors Press published Yabu Pushelberg, featuring six essays by Vogue contributing editor William Norwich. In this 200+ page tome, the work of YP is celebrated, along with their induction into Interior Design magazine’s Hall of Fame. Spectacular photography showcasing some of their most seminal design moments, including the Four Seasons Tokyo, Bergdorf Goodman, Tiffany & Co., and Louis Vuitton, fill the glossy hard cover.

But with this much creative juice flowing, where do these designing minds start? “You have so many ideas floating around in your brain, some are better than others and you have to edit those ideas to find the best ones,” says Yabu. “You have to be brave—you’ll never cover every base.” 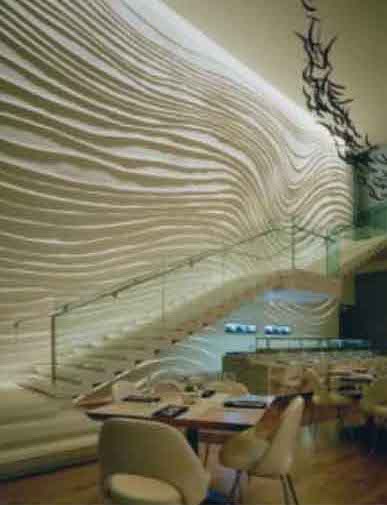 Take working with someone like Eric Rippert at a little establishment called Le Bernardin in NYC, for an example of bravery. Le Bernardin has been awarded everything from a Top 10 Zagat rating to a Bon Appetit accolade for its pastry chef to scoring 5 stars on New York magazine’s Top 101 restaurants. Only the best will do. According to Yabu, Rippert has a strong personality and his partner Maggie la Coze has certain ideas. “And we have certain ideas,” he says. “We need to be nimble, to satisfy our own wants and desires—and satisfy the client. For example, they are insisting that the wood ceiling stay, and we have said nothing.” Perhaps later, adds Pushelberg, Rippert will see that it looks out of place with the rest of the design.

The opening conversation, where they discuss the project and engage with each other, is a challenge. Good designers, says Pushelberg, need to lead the discussion. “We are risk takers, fearless but not stupid. Restaurants are intangible, they are an emotion that is built and has a life of its own. We will need to see if Eric Ripperts’ wood ceiling remains when the redesign is finished,” he says.

Although they’re known for pushing design aesthetic beyond the conventional, YP are still a methodical team. They approach a restaurant spatially, and there are three dimensions in their planning. “The sequencing of entrancing as it unfolds,” says Yabu. “We create a hierarchy, an order of seating to suit the market.” There are a variety of diners—some want privacy for business meetings, romance or even clandestine meetings, adds Pushelberg. “And some people wish to see and be seen,” he points out.

First, they cut out a pattern of a table and then they ask for the plates that the restaurant will be using. In some cases, as in ONE, Mark McEwen’s restaurant that Yabu Pushelberg designed at Toronto’s Hazelton Hotel, the tables are large because they need to accommodate the large plates and the style of service. So the size and shape of the table they design is often kitchen driven. 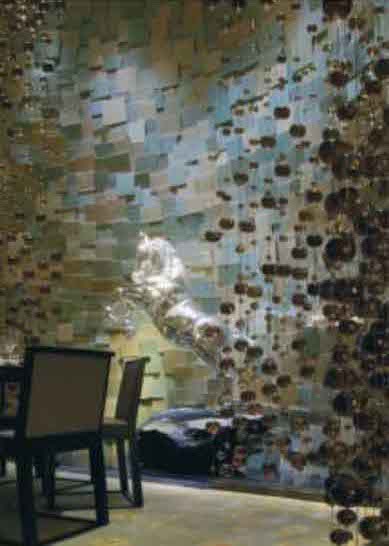 Today, there are many hard surfaces in restaurants, and draping, carpets, heavy tablecloths—all things that can help soften the noise and the ambience—seem to be a thing of the past, say the team. “But a designer has his tricks,” Yabu adds. “We can line the underside of the table with foam, and now there is even acoustic dry wall.”

Chefs, too, are on the forefront of going beyond the food and creating an atmosphere for dining, a whole experience from entrance to plate to finish. “Restaurateurs like Daniel Boulud and Jean-Georges Vongerichten are totally keyed in to what is important,” notes Pushelberg. “They want to see the chairs and sit in them and none of that uncomfortable seating to get people in and out in a hurry. Design for the sake of design doesn’t count anymore. Design: The word is overused in the same way as ‘gourmet’ is overused. These words have lost their impact.”

Yabu and Pushelberg are proponents of lighting as being useful and beautiful. “In a restaurant, it is of prime importance: we want to be able to read the menu, see the food, and look great,” they say. Some restaurants hire a lighting consultant, but then Yabu must become the editor of the lighting designs. “Light the table, not the customers or the floor, he says. “To light the vertical surfaces, well, it’s like painting the surfaces with light.”

And what makes YP say, Wow? “A hotel in the Maldives, where the architect controlled the vistas; a resort in Sri Lanka where tradition was melded with surprising modernism into a modern tropical resort design. Chef Gray Kunz’ Upper House in London,” they list off. And the fact that they continue to have the opportunity to work with visionaries, including Ian Schrager, who gained renown through Studio 54 in the ’70s. Fifteen years ago, Schrager recognized that Miami Beach would boom again and he bought the dilapidated Delano Hotel, notes Pushelberg. “And look at South Beach today.” Now Schrager is building in Waikiki Beach and Hawaii. “He is not a great communicator, yet we need to translate his vision,” Pushelberg continues. “He knows what he wants, but he allows us to do it our way to get the best product, to achieve the results he wants. We are both on the same side. And we both bring our experience to the project.” Isadore Sharpe of the Four Seasons, too, knows what he wants and gets the best from people. “He hires the best and, then, after a discussion, lets them prove him right,” adds Yabu. 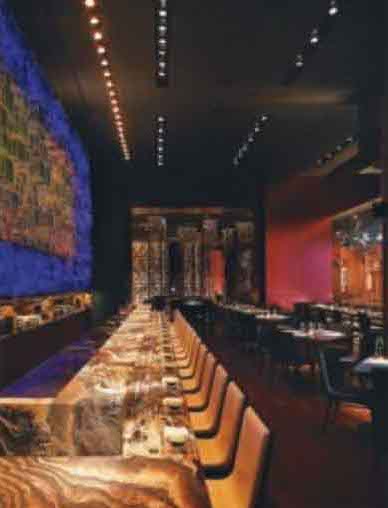 And those chairs? YP is now designing those, too. “But the word ‘designers’ is so over-used, we prefer to say ‘authorship.’ You can see our authorship in the details,” say the pair. At Avenue Road, their furniture will sit in the space they have also “authored,” among a well-curated collection from around the world. “All of our pieces make a statement,” says Stephan Weishaupt, president of Avenue Road.

But is luxury still a statement? And what is luxury today? According to YP, it is quality and attention to details. “It is something that is rare, the tassles on a pillow, the finishing of a banquette, in a hotel the fringe on a bed throw,” says Yabu. “It is an exclusivity, not a gilding of the lily, or over the top for the design cognoscenti.”

Weishaupt describes it more simply. “We aim to give our audience a reason to seek us out,” he says, “and a fresh, inspiring experience when they do.” For the “boys” at Yabu Pushelberg, the environment at Avenue Road is seemingly a perfect one. Fresh? Always. Inspiring? Most definitely.