How Do I Love Thee? Let Me Count the Ways…

It’s always a perfect time to say, “I love you,” but Valentine’s Day is fast approaching so we have cause to be creative with it. Do you have any plans for Valentine’s Day? For some ideas, let’s look at how this special day is celebrated in Japan.

To keep things simple, Valentine’s Day cards are not commonly given, and it is traditionally only the women who give gifts. Historically, women were thought to be shy, and this holiday would provide the opportunity to express feelings through the giving of a gift.

The most popular item to give is, of course, chocolate! That’s the sweetest and safest bet. Chocolate companies in Japan sell more than half of their annual sales in the one week leading up to Valentine’s Day. There are two types of chocolate gift-giving: Honmei-Choko, which means “true love chocolate,” and is only given to loved ones; and Giri-Choko, which means “obligation chocolate,” and is given to friends and colleagues as a token of appreciation. Recently, new trends have emerged, and now one can give Tomo-Choko, “friend chocolate,” to their friends, and if a man chooses to buck tradition by giving chocolate to a woman, it is called Gyaku-Choko, “reverse chocolate.” Alternatively, if a particular box stands out, and you really want to gift it to yourself, you can purchase Jibun-Choko, “self-chocolate.” 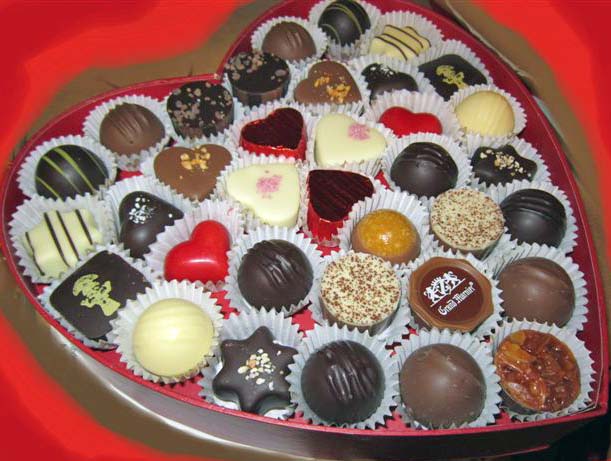 “Surprise Boxes”, Cookie Tins and Azato-Choko, “cunning chocolate,” are becoming very popular among young people who then record their recipient’s response for TikTok or Instagram to be viewed millions of times over. Cunning chocolate is named for its desired optical effect: when held close, it makes a woman’s face appear smaller, an aspired-aesthetic, and its simple design facilitates easy coordination with accessories.

Giri is a Japanese concept of mutual obligation which, in the case of giving chocolate on Valentine’s Day, obligates the recipient to return the favour. To be truly Honmei many Japanese women will prepare the chocolate and the packaging of it on their own, but department stores and grocery stores are fully stocked with the most intricately decorated red heart-shaped boxes of chocolates by mid-January and as the day approaches these stores become more and more packed with women!

Red is the colour of love, but in Japanese iconography, red is also the colour of the sun, as shown in the Japanese flag, so the colour red is deeply symbolic. Presenting a heart-shaped box of chocolate or a bouquet of roses in any other colour than red would not be received as well.

As for those obligated by their Valentine’s Day Giri-Choko, March 14 is White Day, the day in which favours are returned. Men are given one month to prepare gifts for all those from whom they received on Valentine’s Day. On this day, the colour of the gift is white, and the most popular choices among gift-giving men are white chocolate, marshmallows, white flowers or even lingerie. For those looking to make a big impression, the trend is toward Sanbai Gaeshi, “triple the return,” which means that the return-gift should be worth three times more than the original gift received.

How To Celebrate Mardi Gras From Home