Japan is a beautiful country. Three places in particular, often written about in Japanese poetry and prose, are considered the “Big Three” spectacular views: Mt. Fuji, Amanohashidate, and Matsushima.

Mt. Fuji is an ever-present, pristine vision towering over Shizuoka, and seen from all nearby prefectures. Many hike up to the clouds to view the lush green countryside below.

Amanohashidate, near my old home in Kyoto, is like an ancient art installation of the Gods. At the summit of a hike, high above the water, we put our heads between our legs and look upside-down at the sandbar across the bay to see the “stairway to heaven”.

Matsushima…only a short distance from Sendai, the capital of Miyagi prefecture. It requires no hike, just an afternoon stroll. One day-off from work, needing relief from a stressful job in Tokyo, I ride the train two hours north to Sendai, connect to the local train bound for Matsushima, and step out into the colourful autumn foliage of north-eastern Japan. This is not a view that requires me to exhaust myself, hiking eight hours up a stony mountain to look back down. Nor does it require me to stand on my head, trying not to think of a Led Zeppelin song. This view is from the inside looking out. 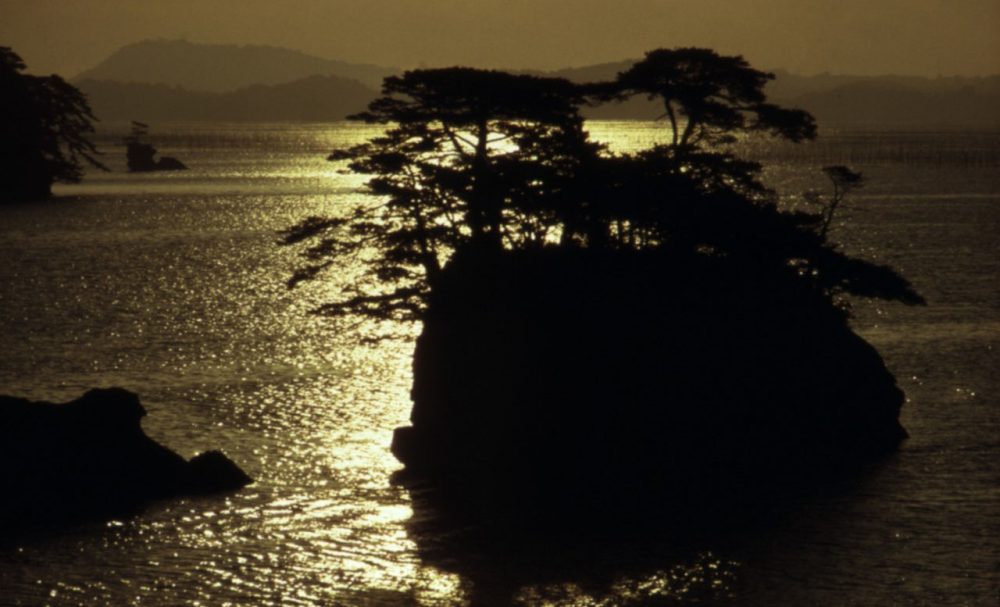 Two hundred and sixty tiny islands (shima) covered in pine (matsu) rendered the famous haiku poet Matsuo Basho almost speechless, and me, smiling. From a distance some of these gems of nature that dot the coast look like little bonsai trees anchored to moss covered rocks. Four main islands, the “Matsushima Shidaikan”, provide the most stunning scenic vistas of Japan’s natural aesthetic. Paths winding though manicured Zen landscapes, and around inlets frothed by ocean waves reflecting a bleached-white sun, are worn by young carefree couples in love, and elderly groups on mid-day walks. I stay there all day, relaxed and inspired, as the sun’s beaming disk, just like in their flag, gradually gives way to pastel light, and slips below the water. The air is fresh and crisp; the soft leaves in the breeze, a kaleidoscope of colour; and the day, simply pleasant, organic, and calm.

Today, the latest reports from the March 11th earthquake-tsunami one-two punch, that has laid destruction and devastation along Japan’s northeastern coast, provide no information about Matsushima, which lies directly across the bay from the quake’s epicentre. It is hard to imagine, hurtful to reconcile, that such a romantic place of breathtaking serenity could be so instantly and violently overhauled.

As the waters recede, and they will, our hearts and our hopes are for the people of Japan who, even amidst disaster, maintain their dignity, decorum, and quiet strength.