How many sushi restaurants are there in Toronto? Thousands? How many would I recommend? I can count them on one hand. What we commonly think of as sushi, even when purported to be high end, is generally below the highest level. The same can even be said in Tokyo where there are 160 000 restaurants of which 230 are Michelin starred, and of those not all of them are Japanese or serve sushi. Most diners have no idea what the height of sushi can be. We simply have not been exposed to it—until now. Enter Sushi Masaki Saito.

Chef Masaki Saito is a 2-star Michelin Chef raised in Hokkaido, where the quality of fish is superior, and trained in Tokyo, where the quality of training is superior. He made his mark in New York. To be clear, it was not the NY restaurant that received the stars; it was the chef himself. He has now relocated to Toronto. Why? Because the Toronto dining scene demands a higher standard. It cannot be overstated that the best quality sushi is not necessarily in Japan; it’s wherever a sushi chef with the best knowledge, skill and connection to ingredients can prepare it.

What is a Michelin star and why should we care?

Renowned French Chef and pioneer of nouvelle cuisine, Paul Bocuse once remarked that, “Michelin is the only guide that counts.” It directs us toward excellence. Gaining or losing a star can determine the fate of a restaurant and even impact local tourism. There are only twenty 2-star Michelin chefs in North America. For those around the world to whom it is of interest, Chef Saito, with two stars for his new Edomae style sushi, is held in very high esteem. This is, therefore, a great acquisition for Toronto. 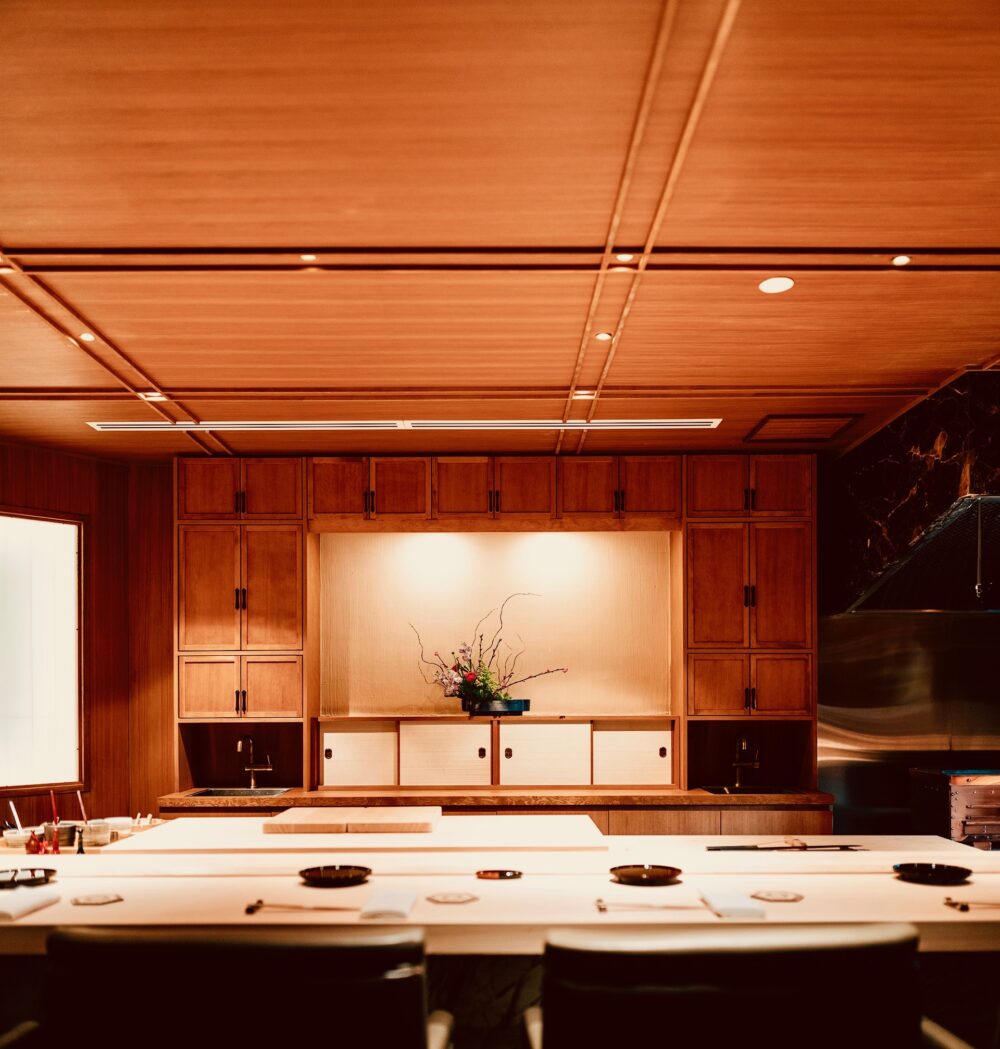 (Edo: official name of Tokyo prior to Meiji Restoration. Mae: in front of.) Historically the waters around Tokyo Bay did not provide the best quality fish. Moreover, during the Edo period there was, of course, no refrigeration. How to maintain freshness was of paramount importance. Local chefs developed preservation techniques, utilized a range of knife wear for different cuts, and adjusted thickness and scoring depending on the fish, the part of the fish and its ageing. The aim was to maximize freshness and individual qualities. Today there are many restaurants, progeny of the Edomae tradition, that boast Edomae sushi without qualification.

As a former marine biologist Chef Saito also possesses and respects a holistic, even intuitive understanding of the fish, its source, its nature and seasonality. Does this make a difference to his sushi preparation? Absolutely. He does not rely on a buyer or local distributor. He has a direct relationship with select vendors at the Toyosu fish market (formerly Tsukuji) to procure only the top grade ingredients. 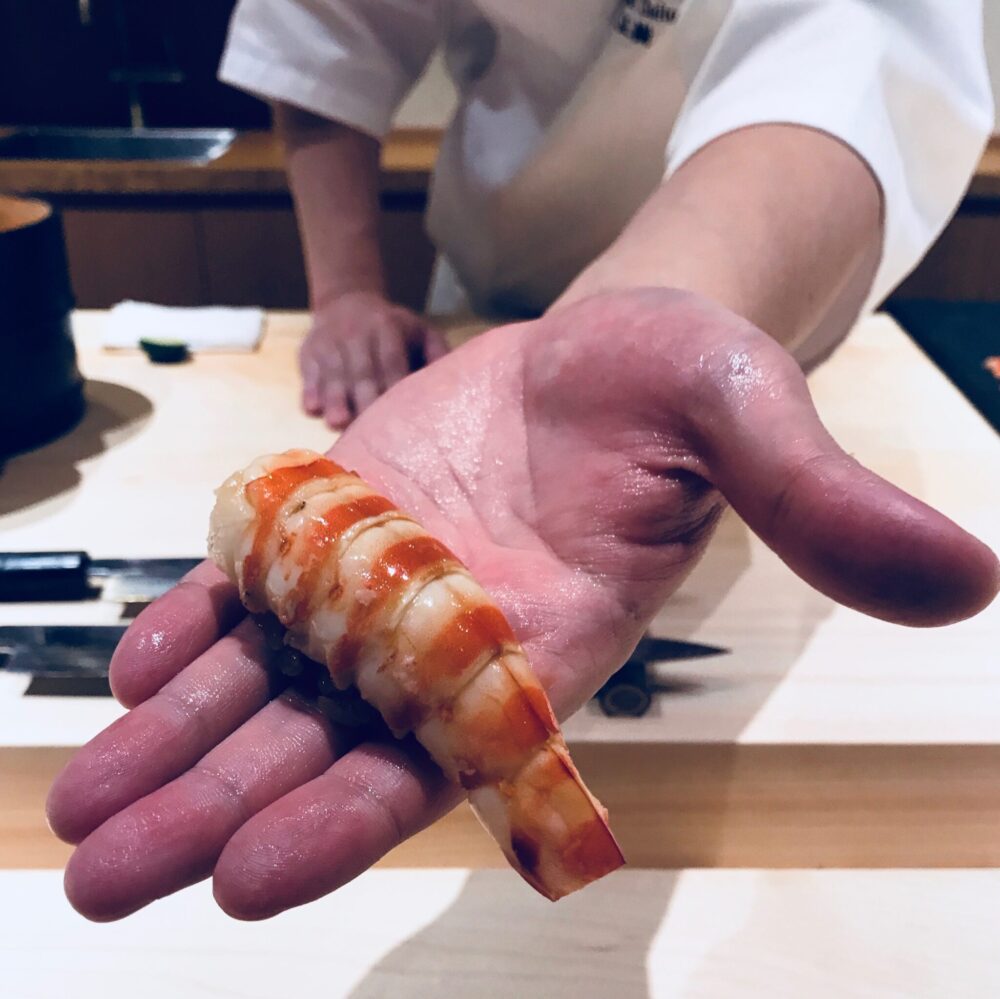 His preparation involves ageing the fish, similar to how one would age beef to allow enzymes to break down tissue for improved texture and flavour. When it comes to scoring the fish to elicit flavour and mouth feel, he is without peer. His seamless technique is elevated by the best supporting ingredients. As I watch him prepare each piece of toro, ika, hamachi, saba and more, my anticipation soars. We are instructed to eat each piece as soon as we receive it because that is when it’s at its peak condition. Another tip is to turn the sushi over in your mouth so that it is the fish that is flat on the tongue, not the rice, and in this way the expressions of umami are much more pronounced. The rice, sourced from Niigata, is the purest and most delicious in Japan. It is not merely a conveyor of protein, it adds to the flavour experience. The rice is served warm to complement the fish, and is touched with a red vinegar for optimal harmony of flavour and structure. What makes Chef Saito’s style “new” is that he draws on international influences from France, from China and even from Canada.

Between courses of sushi, Chef Saito presents a hairy crab. Watching him break it down is a display of virtuosity. With dizzying speed he handles it like a Rubik’s Cube and then, like magic, presents the lightest, meatiest offering of crab. The enjoyment of omakase dining is that we can ask questions of the chef and engage in dialogue with him. Like a performer, his wit and charm are part of the show. 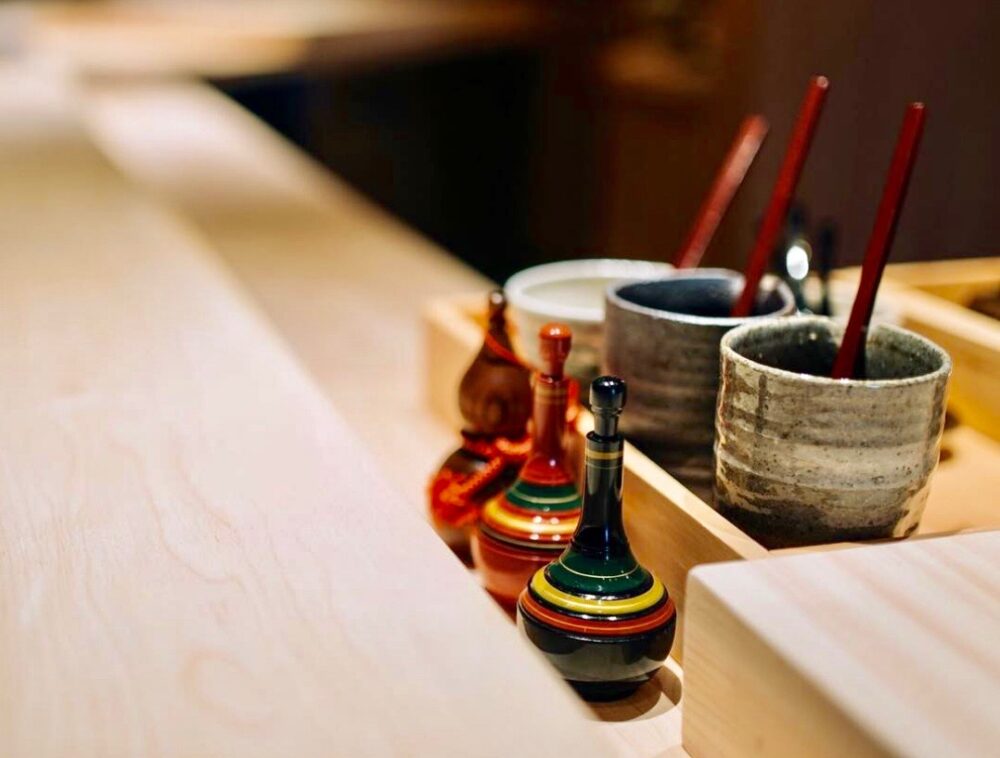 Japanese grouper is aged three days and is so soft on the palate. We are instructed to dip it in iri-zake, an Edo period sauce that is a subtle brew of sake, dried plums, fish flakes and salt. Today there are only five restaurants in Japan that serve it instead of soy sauce. Lightly torched for subtle charcoal essence, Spanish mackerel is served with a drop of wasabi on a seaweed soy sauce. Slow cooked octopus is perfectly delectable. Uni from the Chef’s hometown in Hokkaido has not been washed of its oceanic essence and so it is delicately sweet, light and airy. Tuna, beautifully maroon in colour, has been aged one week and is sublime. Golden eye snapper is served over a ball of Niigata rice with two kinds of vinegar. Barracuda blends mellifluously with the rice and is splashed with lime not soy sauce. Each morsel is more impressive than its preceding one.

Every detail of this restaurant is lovingly tended to maintain top quality and focus on the experience. Austere by design, the soft lighting and hinoki wood sourced from Nara Prefecture set the tone. Filtered soft water is poured into Zalto glassware. Sake, custom-brewed from Gifu Prefecture is flecked with gold. No expense is spared to create a truly authentic Michelin-quality dining experience reminiscent of the ambience and hospitality found at only the best restaurants of such class in Tokyo, and yet, this is Toronto, and its auspicious beginning is already garnering attention around the world.

Thyme for a Summer Cocktail Recipe