Chinese cuisine is the most diverse cuisine in the world. Toronto is home to the most diverse Chinese population in Canada. And yet, the downtown core of Toronto is lacking in authentic high end Chinese restaurants. For that, we’ve had to venture to Richmond Hill, Markham and Scarborough, which is exactly what Executive Chef David Schwartz did. Those Chinese restaurants became an inspiration for his menu at MIMI Chinese, which has been packed since opening, delighting Torontonians eager for a game changer with high octane flavour quotient to blow away our gastronomic doldrums.

From his extensive travels across China, exploring regional cuisines and exposing his palate to local recipes and ingredients, Chef Schwartz became obsessed with these exotic flavour profiles, and determined to find a way to bring them home. “Once I really tuned into it, I realized it’s the most historically deep and diverse food culture on the planet.” And once you’ve been turned on to that level of culinary sophistication, you can never again settle for anything less. Though Chef Schwartz lists his favourite Chinese restaurants from the GTA on the MIMI website, his own menu brings together a reverent focus on four distinct provinces: Guangdong, Sichuan, Hunan and Shaanxi. 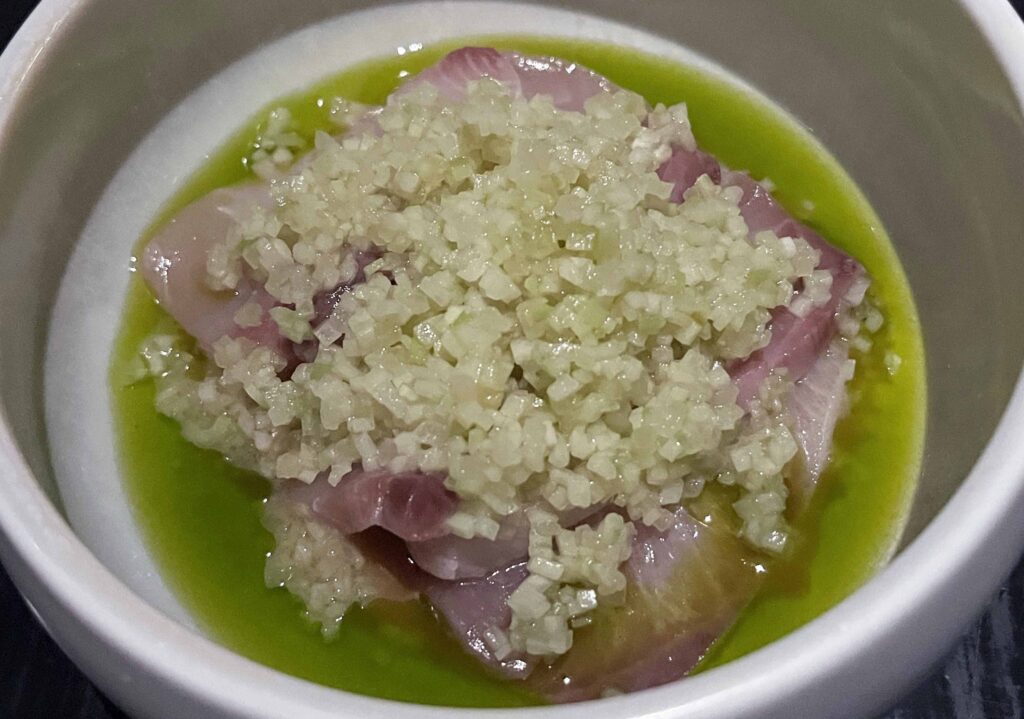 Seated at a comfy banquet of rich deep red within a sleek black room our culinary journey begins.

The first dishes to arrive at our table are from Guangdong, China’s most populous province, located along the South China Sea. From the Raw & Cooling section of the menu, silky slices of yellow tail luxuriate in sesame oil, ginger oil and a light soy bean sauce. At first glance it looks like sashimi, but this Kuai Style, as we learn, predates sashimi, and was popular in early Chinese dynasties. Topped with rice-sized chopped-cucumber, the beautiful melange of textures is so refreshing for summer and opens up my palate for the meal. And from the Savoury & Warming section of the menu, stuffed chicken wings. Never before have I seen such plump, crisp wings, perfectly stuffed with a fragrant portion of sticky rice and mushrooms. I dip the wings in a nuanced, floral salt, and have to ask, “What is in this salt?” The waiter tells me he will ask, but returns to say, “It’s a secret.” He can only reveal a medley of five spice, fennel seeds, and sand ginger–not one ingredient more. So refined, light and clean tasting—there is nothing heavy or oily about these delectable wings and, like the yellow tail, it’s a textural dish with dynamic notes that are teasers for what is to come. 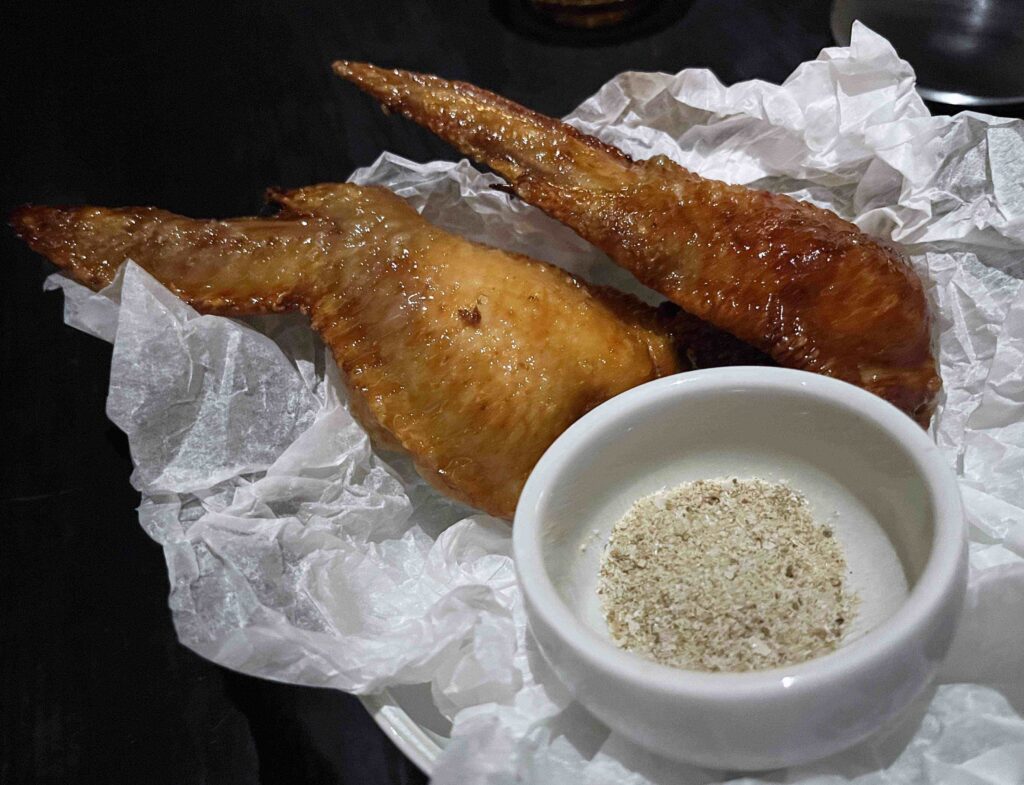 Spanish mackerel is salted and braised in a black olive and leek sauce, spiced with Anaheim chilies (which are actually originally from New Mexico), and then oven-roasted. These chili peppers add a mild warmth and almost sweet heat. The two pieces of fish are four ounces each, and yet so tender and filling that that is all we need. It’s a very healthy, very flavourful fish.

After seeing a neighbouring table ooh and ahh over their Black Pepper Beef, we order the same. 18 ounces of boneless ribeye is so tender and juicy, my dining partner asks if it is wagyu. Actually, this is Ontario’s own, from Guelph. (Ontario beef product is increasingly recognized for high quality in its robust flavour and also nutritional value.) This beef has wow factor. I know this, because our conversation has been replaced by silence. Each succulent morsel is enriched by a kick of the black pepper and the crisp onions. This is a steak that my Dad would have loved. It reminds me of when I was a child, and he would order the steak at House of Chan. In the late ‘70s to mid ‘80s that was as good as it could get. But this is on another level, and beckons a wine pairing.

The wine list is diverse, and includes not just the usual suspects, but wines from Georgia, Lebanon and Hungary as well as Ontario. It’s obvious that significant thought has been put into designing this list, which also features an extensive list of sake, sparkling cider and beer, no doubt, all specifically selected to answer the age-old question: What pairs best with Chinese food?

And what’s this? Baijiu, the most widely consumed spirit in the world. It is derived from sorghum, and originated in the Tang Dynasty (618-907 AD.) There are, of course, regional variations, but the classifications are determined by aroma. Light Aroma is fermented for up to four weeks in stone pits and has a complex profile. Strong Aroma is fermented for up to four months in clay pits and is known for its pungency, and its fruity and tropical notes. This is recommended for accentuating the spices of Sichuan dishes. Sauce Aroma is fermented and distilled seven times in one year. It is known for its soy sauce aroma and, we are told, is the choice of the rich and powerful. We sample one Light Aroma from Xianxi that is very approachable and floral. For me it is reminiscent of an Acholado (blended Peruvian Pisco,) but more intense and lingering on the palate. The Strong Aroma that we sample is from Sichuan. It has notes of banana and a fiery but refined compression of fruit that is smooth, accessible and, while intense, not volatile or overpowering. 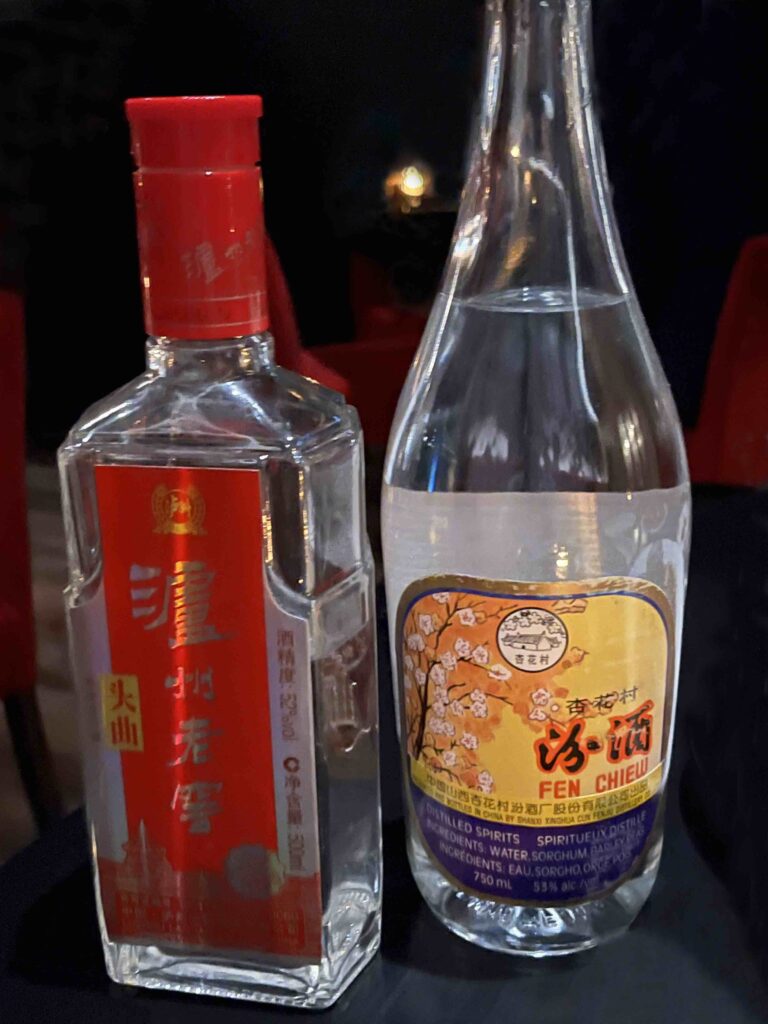 Typically, I would not be inspired to order cabbage, but after a few sips of Baijiu I could be persuaded to order just about anything. Interestingly, this cabbage dish, a Shaanxi recipe, is charred and splashed with sweet soy, cumin and Sichuan pepper. The pepper creates a numbing sensation on the tongue, while the harmony of cumin, soy and the essence of the char enliven this cabbage beyond my expectations.

The most colourful looking dish in recent memory is brought to us with an explanation and a caution. The Sichuan Hidden Crispy Chicken is somewhere beneath a mound of 100 Facing Heaven Chilies. We’ve been advised to not eat the chilies, but to sift through and find the dry-rubbed nubbins of chicken. Surprisingly, the chicken pieces are not overly spicy. Their heat is flavourful, not burning. There are notes of garlic and that numbing Sichuan pepper, and I just can’t get enough. Bursting with exuberant flavours, it is as vibrant on the palate as it is to the eye. It could not be made without spice. The spice is what makes this dish. The expertise of this kitchen deftly incorporates a variety of spice to enliven and animate each dish without being overpowering.

Where to DINE Now: Epoch

Each dish is playful, inspired, and conversational. This vivacious menu respectfully conveys a taste of the mystique and history of Chinese cuisine, while exemplary service attentively answers all our questions about it.

And now, for the dish we’ve heard about and have longed to taste for ourselves, the Four Foot Belt Noodle. This Shaanxi dish is a show-stopper. Long noodles represent long life. These two noodles, both four-feet long, are raised with tongs high above our table and cut with golden scissors in an enticing presentation. My dining partner is my four-foot-high son, who is mesmerized by a noodle that is taller than himself. Lavished in house-made chili oil and mushroom with cucumber to counteract the spice, these al dente noodles cut into thick squares reflect the novelty and whimsy of a kitchen that takes our enjoyment seriously. 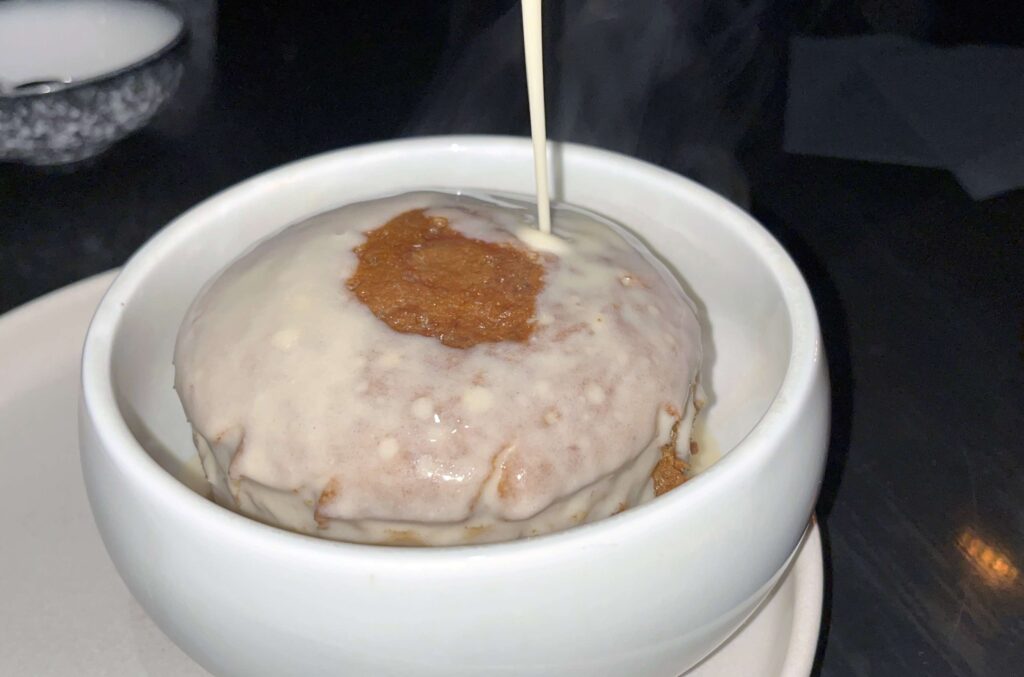 For our dessert we select a moist, steamed cake called Mai Lai Go from Guangdong that receives a table-side pour over of sweet cream. This kitchen and enthusiastic service leaves stone left unturned, as each dish, from start to finish, is another opportunity to impress and inspire us. One would think many of these dishes are not for the timid, and yet they are surprisingly tantalizing. For Chef Schwartz, this represents his passion and investigation into authentic regional Chinese cuisines. “Toronto is an amazing place for reference points.” He tells me. “The food in Markham, in Scarborough and Mississauga, is some of the best Chinese food in the world. My hope is that this will act as a gateway to those places.”