When Patrick O’Driscoll, President and CEO of Hiram Walker and Sons, opened up a cupboard of old products, he had no idea what he had found. Asking his master blender, Dr. Don Livermore, what it was, he was told these bottles of Lot No. 40 and Pike Creek whisky were leftovers from a failed launch in the ‘90s. These were fantastic products, but the trend of the day was elsewhere. Tastes change.

“Can we bring these back,” O’Driscoll asked? “Yes,” answered Dr. Livermore. The right whisky was still maturing. It could still be reformulated to match the original product. Three years ago Lot No. 40 and Pike Creek were both re-launched, and recently Lot No. 40 won the 2015 Canadian Whisky Awards coveted Canadian Whisky of The Year.Canadian whisky goes back to the 1850’s. Pioneers like Henry Corby, J.P. Wiser and Hiram Walker came from Scotland, England and the US to settle in different parts of Canada. During the Civil War, American distilleries were forced to close down. Troops had to source whisky from Canada. Then came Prohibition. Massive amounts of Canadian whisky were being shipped. Whisky became so important for the Canadian economy. Income tax didn’t come into effect until World War II, so a key source of revenue for the government was the excise tax on alcohol. A lot of Canadian infrastructure was built off of these revenues. 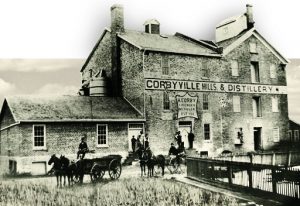 Canada had the clout to be the first country to mandate that barrel aging for a certain number of years was required in order to qualify as a true whisky. Canadian whisky then became synonymous with Rye, a dominant ingredient. However, by the 1980s and ‘90s, clear spirits like vodka dominated. They were easy to drink and easy to mix. Rye whisky became less desirable because, by comparison, it was harsh. It was more polarizing. This undermined the reputation of Canadian whisky. Driven by popular culture, television shows like Sex and the City made drinking Cosmos cool. Tastes change.

Over the past ten years, whether due to the popular culture in shows like Mad Men, a throwback to the ‘60’s when men drank whisky; or the locavore movements that have included and revived interest in craft distilling; consumers, mixologists and restaurateurs are all getting excited about whisky again. The original formulations are being brought to the forefront. Products with more rye content and more distinctive flavours are being re-launched along with new products with changing recipes. The reputation of Canadian whisky is rebounding, and its refined craftsmanship is an homage to its rich heritage and its broad history.

Tasting Notes: “Lot No. 40 is expertly distilled in small batches using only the finest locally sourced ingredients. By distilling in a single copper pot still, the result is a whisky that starts off earthy and woody tasting, and then becomes full bodied and complex with a velvety vanilla oak finish.” – www.corby.ca/brands/Lot40