When asked to pick one place where the Delta Blues began, BB King pointed to Dockery Farms in Cleveland, Mississippi, where legends were born.

On a wet spring morning, I peel back the branches and weeds that cover what was once a stage on which Charlie Patton, fretting his guitar with a pocketknife, fed captive audiences his Spoonful Blues. In the silence, I imagine those who performed at this cotton plantation, isolated, so they wouldn’t be run out of town. Some came to play; others stayed to teach. Patton stayed. Eddie “Son” House; Howlin’ Wolf; Roebucks “Pops” Staples—they were all raised here.

I press an audio button on a sign, and the gentle breeze carries the echo of Patton’s pioneering slide guitar that he played on his lap—a style he picked up from Hawaiian bands at clubs in New Orleans. Across the highway, I walk a lonely dirt road of Faustian lore. The story goes that one night, Patton, Willie Brown and Robert Johnson had an argument. Johnson headed out this way–to the crossroads. Apparently he paced all night until he caught a train to Hazlehurst, where he practiced his guitar in the midnight quiet of local cemeteries. To the astonishment of his old friends, he returned to Dockery a year later with a perfected technique. His playing was more consistent, and his songs could be seamlessly cut for a three-minute record. Some say that night at the crossroads, he sold his soul to the devil. 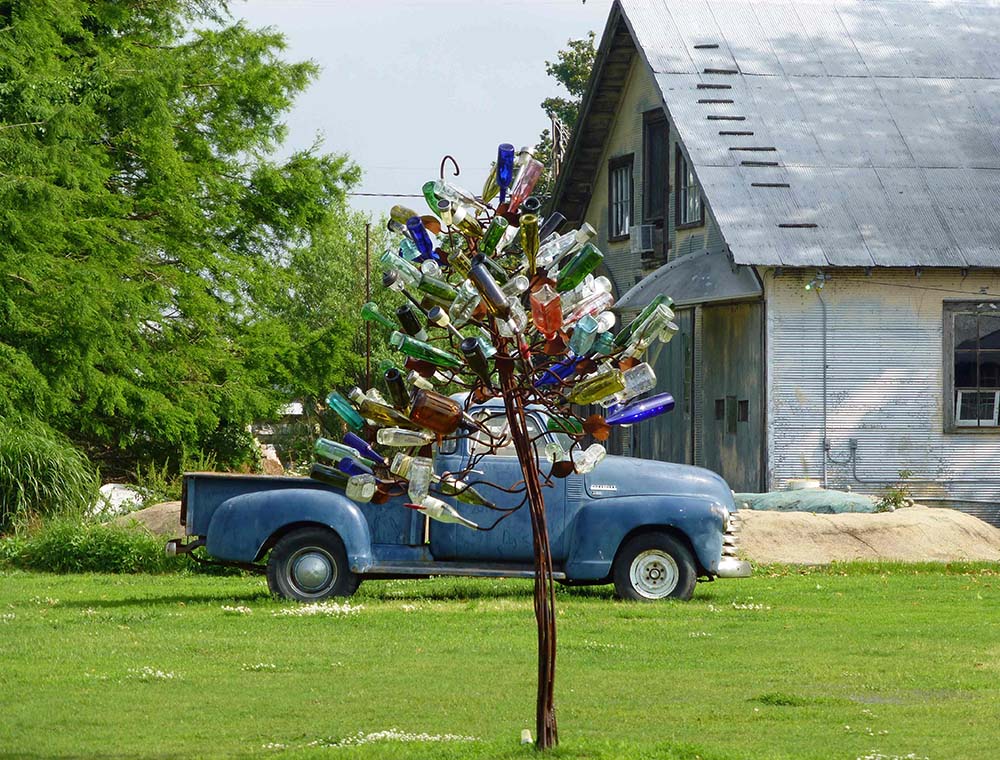 In nearby Clarksdale, I arrive at the Shack Up Inn, and collect my keys to what was once a slave cabin. Ornamental bottles fit tree branches like gloves, and a wind chime tickles the silence. Pensively, I lean against the porch post and wonder. Inside the main building is a stage from which I can hear a distant wailing guitar. Out front, an ’83 Cadillac takes me to Morgan Freeman’s Ground Zero Blues Club, located at 0 Blues Alley. Snacking on fried grits and hot tamales, I’m entranced by the band as they ignite their instruments and slide through an Allman Brothers jam like snake charmers. On this hot night, my cure is cold pecan ale, and my new friends are tossing it back along with plates of grilled catfish with turnips and black-eyed peas. There’s a buzz going around about a young phenom playing at a nearby club called Reds. Outside, a smoker is cooking up sweet-smelling ribs and turkey legs. Inside, a 14 year-old boy named Christone “KingFish” Ingram is bending notes and plucking tears with magic fingers and guitar wizardry that come from some other worldly legacy way down deep. 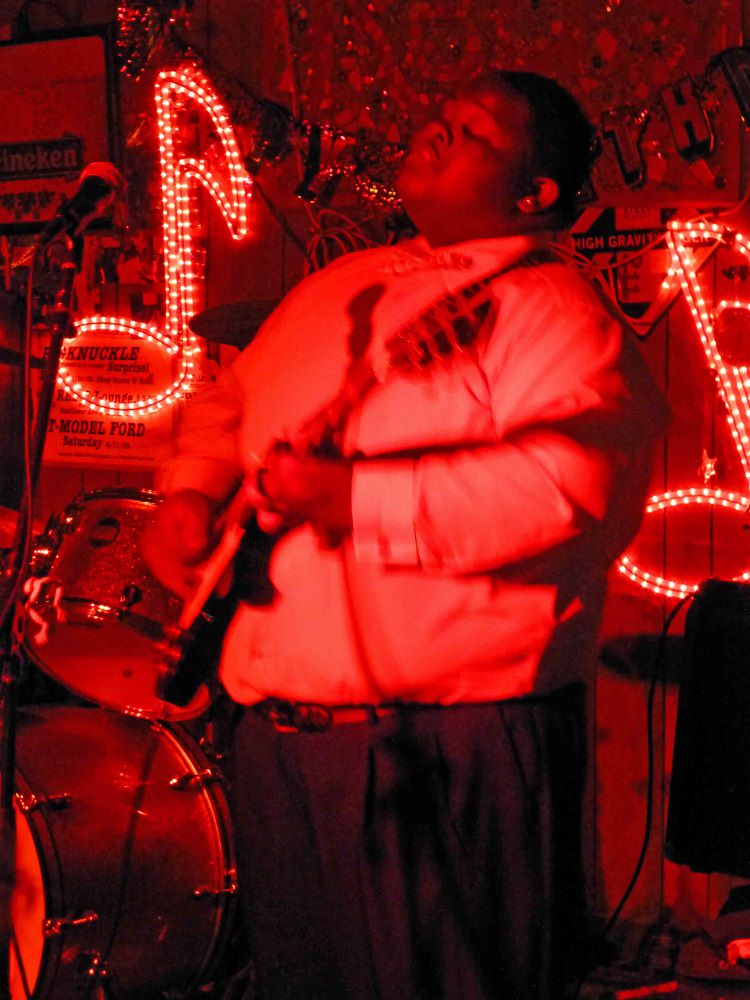 Muddy Waters’ cabin is housed in the Delta Blues Museum just a short walk over the tracks. An outdoor stage across from it fills the air with the infectious sweetness of harmonicas and guitars harmonizing into the night. Back at the shack, there’s more live music. The music is everywhere. It’s the culture; the religion; it’s just what they do here; and it seems as soon as the sun goes down, every stage lights up.

Restless, I get back on the road and drive into the moonlight, heading south on Highway 61. Veering off onto the gravel beneath a cloak of ominous trees, potholes test my shocks as pebbles dance off the fenders, and my high beams light the fog through rural Merigold to one of the last remaining juke joints of the south, Po Monkeys. Funk pours out the speakers like water through a showerhead, as cheap beer is passed and hips sway under a kaleidoscope of lights. Sheet metal and wood somehow hold this former sharecropper’s shack patched together, and inside nothing matters but smiles and music. 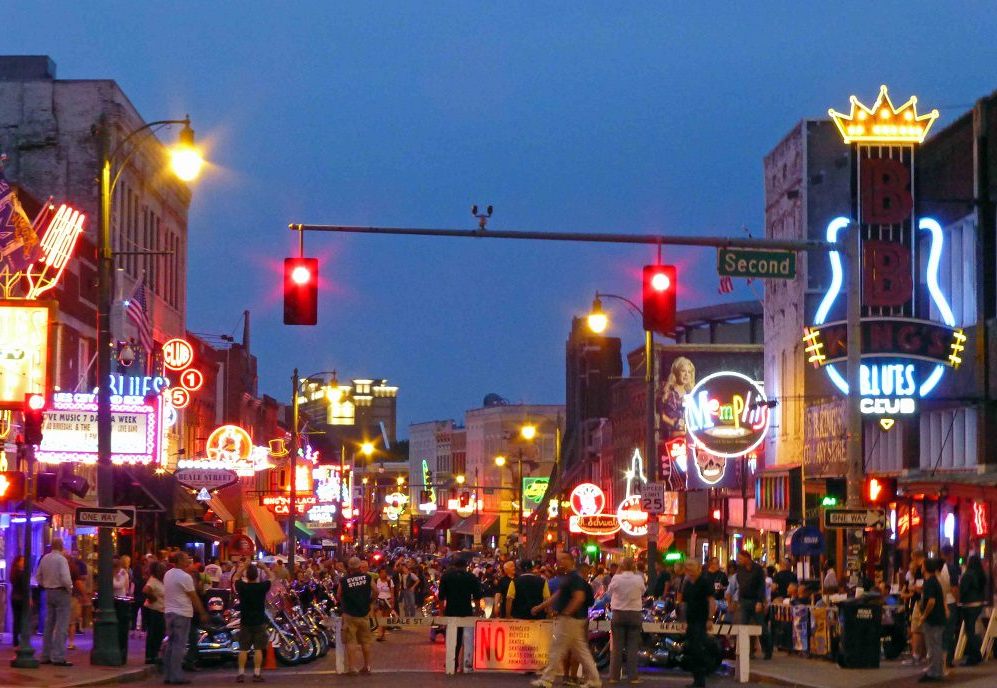 When blues musicians sought larger audiences, their mecca lay further on up the road, in Memphis. At the Stax Museum of American Soul Music, I’m told, “To a bluesman, Beale Street was like Broadway to an actor.” Once the hub of the black community in the south, it now feels like a block party. Weaving through engine-revving bikes, as bars and juke joints flood the street with live music, one band is ripping through Freebird, while a few steps away I hear the fluid sweet tones of Little Wing. There’s a crazy exuberant energy here every night of the week.

Across town, Sun Studio maintains the space where that serendipitous moment occurred when The Million Dollar Quartet of Elvis Presley, Jerry Lee Lewis, Carl Perkins and Johnny Cash shared an impromptu jam session, but rock ‘n roll’s Palace of Versailles is just outside town, at Graceland. There is an inescapable excitement as we pass through the gates. Rhinestone-studded jumpsuits and walls of endless gold records display the grandeur of The King. The TV Room’s wall-mounted televisions, the mirrored ceiling, the carpeted kitchen, and the “Jungle Room,” with its built-in waterfall, are a trip back to the ’70s. Passing through the Elvis fan detector, I board the Lisa Marie and wink, “Thank ya very much.” 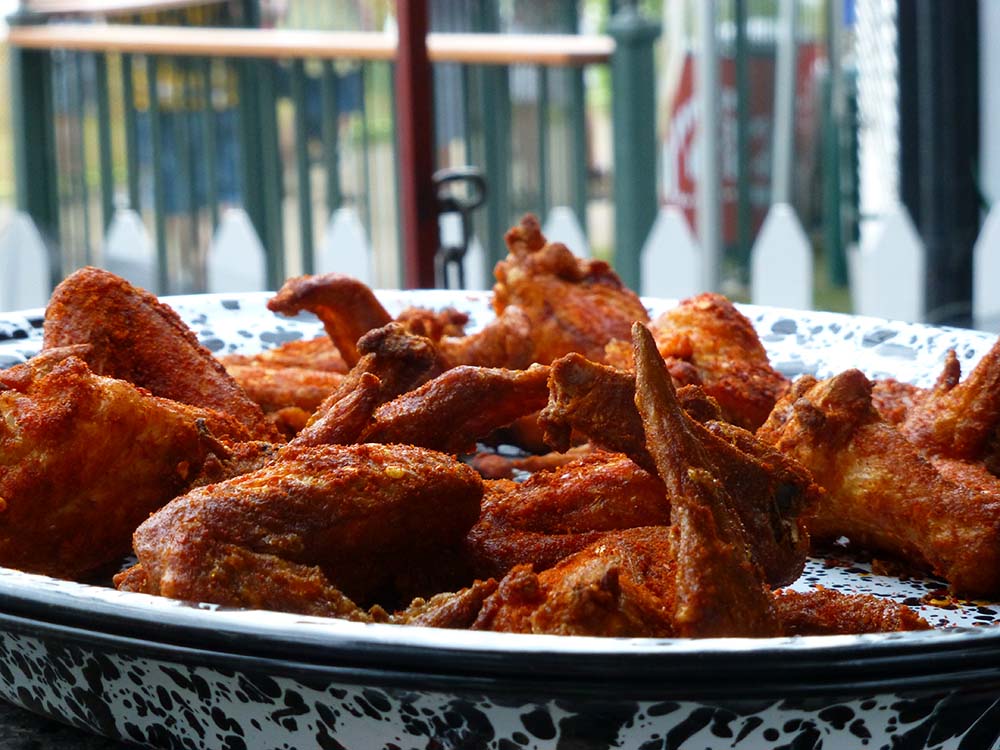 Memphis also has another claim: Dry Rub. At the World Championship Barbeque Cooking Contest, JC Youngblood of Central Barbeque explains to me that their barbeque techniques come from the plantations in the delta, where the plantation owners would give the less desirable cuts of meat to the slaves who had been working in the fields. “They creatively figured out the only way to eat it was to rub it with salt and spice, cook it slowly at a lower temperature, and then they could make a pretty decent meal out of it.” His perfectly meaty, caramelized ribs—smoky and tangy—are incredible. Just off an alleyway, I step into Rendezvous for a taste of their renowned barbeque ribs. The manager tells me they’re closed…but if I want to come in for some ribs, he’ll seat me. “Huh?” I reply. “We’re closed, but we’re makin’ barbeque all the day long,” he smiles, “and we’d never refuse anybody.” Well, much obliged.

The African-American traditions of food and music can be found everywhere, but the heart of rhythm and blues is at Stax Records. I’m told that if you came to town to play, and if you had some gift from God that you wanted to get out, this is where you would come. Stax showcases the evolution of the African-American experience from field hollers and church choirs, to testifying through gospel, country, blues and soul, to the secular anthems that would embody the Civil Rights Movement. Standing in the middle of a dance floor with Soul Train playing on the big screen, I feel so excited! The surround-sound of Mavis Staples singing like a prophet, “If you’re ready…come on go with me” gives me chills. This soul music was an integral part of the marches and the rallies of Martin Luther King. After his assassination at the Lorraine Motel, now part of the Civil Rights Museum, these musicians carried on his message through their songs. 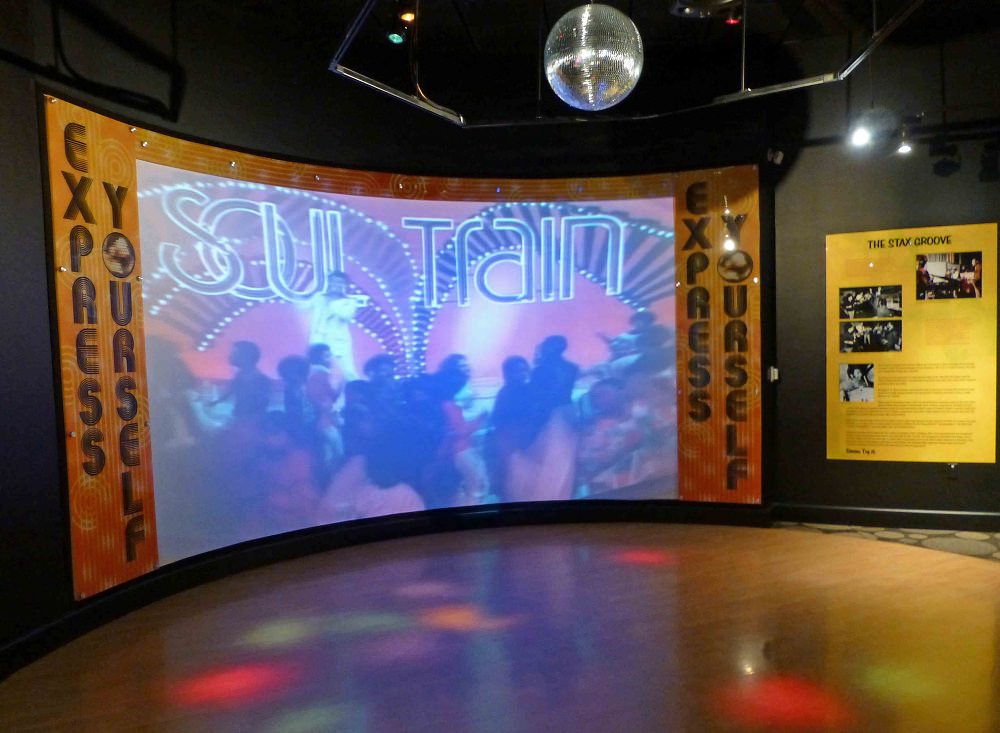 “Walking with my feet 10 feet off of Beale,” surrounded by a reverberating orbit of musical genres that chart so much history, I feel elation, like I’m at a revival. All the joy, all the pain, all the legends that made their way from the cotton fields up Highway 61, the train lines, and the Mississippi River are encapsulated in these songs of hope through unfathomably dark conditions, and they are testaments to the beauty and fortitude of the human spirit. As Shakespeare once wrote, “If music be the food of love, play on…”