From asado to yakiniku there is a myriad of styles and methods of barbecue around the world, but in the United States alone, it varies from state to state. The rich history of barbecue across the U.S. reflects landscapes, ethnic influences, and social conditions. From Baltimore and Buffalo to Alaska and Hawaii there is pride in local specialties, but it’s the pitmasters of the south that we look to for lip-smacking inspiration. Here is a basic primer of differences in this tantalizing cultural institution across the southern U.S.

★ VIRGINIA
Colonial diaries reveal that American barbecue began in Virginia, and involved hogs roasted over pits of smoky wooden embers. Early settlers learned how to salt-cure and smoke their ham from the natives in Smithfield, “The Ham Capital of The World.” President George Washington even had his own smokehouse where he cured and smoked his own Virginia ham, and held 3-day barbecues. The sauce is thickened with ketchup, spiced with mustard, and made tart with vinegar. Pork shoulders, pork ribs, chicken and beef are hickory or oak-smoked. In the western region that would become West Virginia, charcoal from the coalmines was preferred. Increasingly popular is wild game and, along the coastal oyster trail, barbecued oysters.
• Merroir, Topping. Oysters are roasted with herb butter and Edwards Virginia ham, or barbequed with bourbon and chipotle.

★ KENTUCKY
Known for fried chicken, hot browns and bourbon, the most distinctive claim that Kentuckians have to barbecue is mutton, basted and smoked over hickory, served with a Worcestershire sauce-based dip with vinegar, black pepper and allspice, and a side order of Burgoo stew of meats and vegetables.
• Moonlite Bar-B-Q Inn, Owensboro. Renowned for its smoked meats including chicken, beef, pork and mutton, and its lunch and dinner buffets.

★ TENNESSEE
Tennessee is home to Nashville Hot Chicken and Memphis Dry Rub. It’s the dry rub–ribs crusted with dry spice rub and no sauce–for which the state is most known. This barbecue technique comes from the plantations in the Delta where slaves who had been working in the fields creatively figured out that the best way to prepare the less desirable cuts of meat was to rub it with salt and spice and cook it slowly at a lower temperature. The great debate at the World Championship Barbecue Cooking Contest in Memphis is: “Wet or Dry?” Jack Daniels can be a key ingredient in tomato-based barbecue sauce, and in whisky barrel chips used for smoking.
• The two pillars of Memphis barbecue are Central BBQ and Rendezvous. Try both!

★ NORTH CAROLINA
Traditional “Pig Pickings” consisted of whole hogs smoked over charcoal and hardwood. Today, pork shoulder is the dominant choice. Western North Carolina is known for its peppery “red” sauce of ketchup, vinegar, and various spices. The introduction of Heinz ketchup into barbecue sauce in 1876 became known as the “Lexington Dip.” Lexington bills itself as “The Barbecue Capital of the World” boasting at least one BBQ restaurant for every 1,000 residents. A “Lexington Barbecue Sandwich” is hickory-smoked and includes red slaw—coleslaw that contains ketchup instead of mayonnaise. Central North Carolina uses a yellow, mustard-based sauce with vinegar and brown sugar. Eastern North Carolina sauce is cider vinegar- and pepper-based, without using any tomato, and comes with a side of vinegar slaw. Its spicy and acidic African flavour profiles include cayenne, black and red peppers. More tart than sweet, it is absorbed into the meat and cuts the fat. This is the mother of all American barbecue sauces.
• Skylight Inn, Ayden. True to its classic roots, the menu of chopped meat is straightforward: pig or yard bird.

★ SOUTH CAROLINA
Many states claim to be “The Birthplace of Barbecue.” South Carolinians are proud of their tradition that dates back the farthest, to the Spanish colonialists who discovered the open pit cooking of the natives on the islands off the coast of South Carolina. Traditionally, this is the only state that includes all four recognized barbecue sauces: mustard-based, vinegar-based, and light and heavy tomato-based, but it’s the mustard-based sauce for which it is most known. German immigrants between Columbia and Charleston introduced this “Carolina Gold”, diluted with vinegar and kicked up with sugar and spice. South Carolina’s Low Country cuisine also includes oysters roasted over a wood fire grill and served with butter and hot sauce.
• Rodney Scott’s BBQ, Charleston. Slow smoked ribs, chicken, turkey, and steaks are meaty, smoky and bold.

★ GEORGIA
Georgia barbecue is typically a red tomato-based sauce of varying sweetness, heat, and thickness. Typically pork, smoked with hickory or pecan, is sliced, chopped or shredded on bread. The sauce can be mustard, tomato or vinegar-based, or a blend of all three. Georgian specialties include barbecued ham. Another specialty is a side dish of a hearty bowl of Brunswick stew. Georgia is also home to the Big Green Egg kamado cooker.
• Southern Soul Barbeque, St. Simons Island. Georgia institution serving oak-smoked meats.

★ FLORIDA
The first barbeque in the American colonies was the work of French Huguenots who cooked up a menu of alligator, snakes, and dog. Times have changed. Today, the specialty in the Keys is smoked wahoo and other game fish. Terra Ceia Island hosts an annual smoked mullet festival. A Mullet Smoker, made from an oil drum with its bottom removed, is placed over a fire on the beach. In Miami, the Cuban influence is reflected in dishes like roasted pig cooked inside an aluminum-lined plywood China Box and served with a sour orange sauce scented with cumin and garlic. The Florida style can also include local fruit and peppers that can lend the sauce a more tropical accent.
• Caspers BBQ, Kenneth City. Locals swear by the smoked brisket, smoked salmon and smoked mullet.

★ ALABAMA
Cuisine in Alabama is simple and honest. From pecan-infused pork shoulder in the south to white sauced chicken in the north, barbecue brings Alabamans together. Typically, pork is pulled or chopped and sliced between fluffy buns and topped with coleslaw. But, it’s the signature sauce that distinguishes this state. Hickory-smoked chicken is soaked in that legendary white sauce of mayonnaise, apple cider vinegar, lemon juice, black pepper and salt created by Big Bob Gibson back in 1925.
• Big Bob Gibson Bar-B-Q, Decatur. Home of the original BBQ White Sauce.

★ MISSISSIPPI
This is the home of gas station barbecues and more award-winning pitmasters than any other state. Hickory or pecan wood is burned in welded trailer rigs, block pits, or stoves, and pork, chicken, whole goat or beef are slow-cooked with Memphis dry rub or Carolina-inspired vinegar sauce. While Mississippi doesn’t garner the same attention for barbecue as neighbouring states, side-of-the-road smokehouses perfume the air and seduce the senses like no other. One night listening to live blues in Clarksdale goes hand in hand with a massive roadside smoked turkey leg.
• Abe’s Bar-B-Q, Clarksdale. Serving pecan-smoked pork since 1924.

★ LOUISIANA
Cajun spices immediately spring to mind, and yet the most important Louisianan contribution to barbecue is “hot sauce” made from Tabasco or Cayenne peppers and vinegar. Historically, the terrain was difficult and settlers would cook whatever animals they could find. Pork was traditionally the most popular meat, and spices were used for flavour and preservation. When Edmund Mcllhenny was given some pepper seeds from Mexico, he mashed them with salt, added vinegar, aged it, and introduced the world to Tabasco sauce. In areas where open fires were prohibited, a cypress roasting box with a steel lid, later called a Cajun Microwave, was designed to slow cook large pieces of meat, like small pigs, turkeys, chickens, deer, lamb, beef or whatever else was available.
• Johnson’s Boucaniere, Lafayette. Sells chicken and sausage gumbo by the gallon, and tangy in-house smoked brisket.
• Bourgeois Meat Market, Thibodaux. Sells whole pigs for roasting; and Cajun beef jerky—strips of seasoned-steak marinated for 24 hours and smoked all day.

★ TEXAS
In the world of barbecue, you really can’t mess with Texas. German immigrants introduced sausage making, Mexicans brought the spices for flavouring, and the smoke pit style came from African traditions. In Eastern Texas, beef is marinated in a sweet tomato base and slow-cooked over hickory until it falls off the bone. It is chopped, not sliced, and heaped on a bun. In Central Texas, the beef is rubbed with spices, lathered in a thin, unsweetened sauce, and cooked using indirect heat from pecan or oak. West Texas employs a “cowboy style” of cooking directly over mesquite. South Texans prefer medium-thick sauces, seasoned with cumin and chili rather than tomato and sugar. One South Texas tradition is barbacoa in which the cow head is wrapped in maguey leaves, buried in a pit with hot coals and then pulled for tacos.
• Franklin Barbecue, Austin. This is the mecca of brisket. Order everything. This pitmaster has it down to a science.

★ ARKANSAS
Not known for one particular style, it’s the variety and the rich history that distinguish this state. Barbecue arrived with the first settlers. Between the Mississippi Valley and the Ozark Mountains, the Natives, African Americans, Europeans, and neighbouring states have all influenced Arkansas barbecue and the sides that go with it, from okra to grits, all washed down with sweet tea. Within the mix, each corner of the state has its own long-running barbecue institution that is quintessentially and authentically deep smoky and southern.
• Jones Bar-B-Q Diner, Marianna. It’s the oldest restaurant in Arkansas and frequently lauded as the best barbecue in the state. There’s only one item on the menu: chopped pork, and it’s usually sold out by mid-morning. 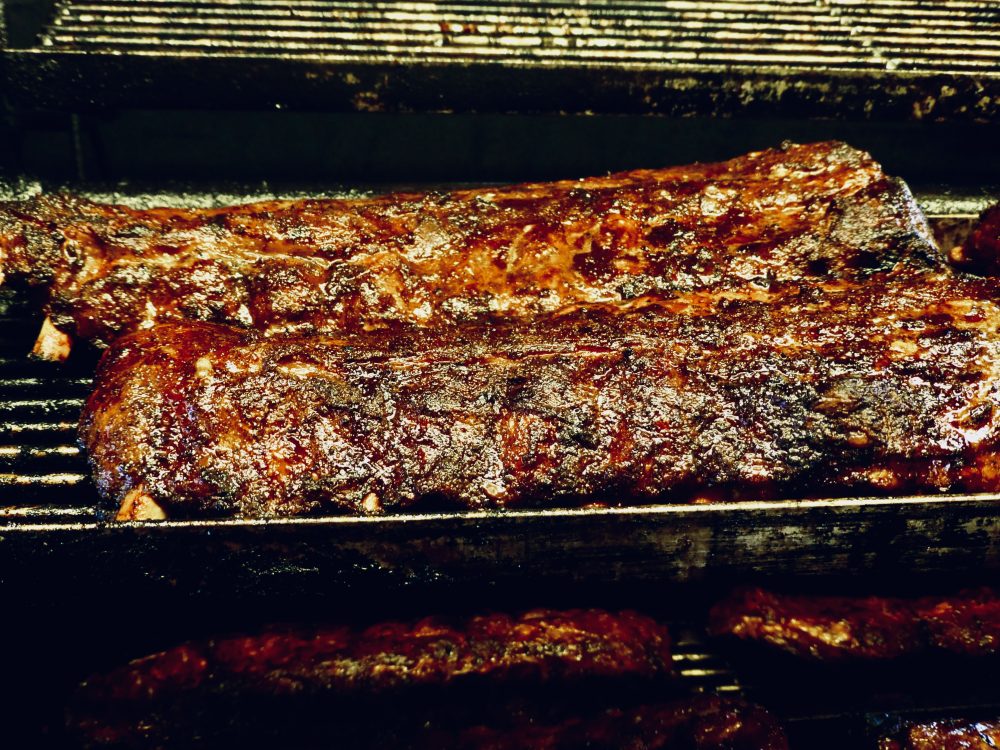 ★ MISSOURI
Kansas City has been a centre for meatpacking, and is consequently renowned for its variety of barbecue, in particular burnt ends and brisket, but also the range of pulled pork, ribs, smoked sausages, smoked and grilled chicken, turkey and even fish. This is a melting pot of barbecue. There are well over 100 BBQ restaurants in Kansas City alone. Their style is hickory-smoked meats lathered in a dark, thick, sweet, spicy and tangy tomato-based sauce with molasses and liquid smoke.
• Jack Stack Barbecue, Kansas City. Hand-cut meats like prime-beef short ribs are slow-roasted over Ozark hickory in old-fashioned brick ovens.

★ Barbeque is personal. If you disagree with our recommendations or have your own, please let us know. ★