Matchmaking the right glass to the wine is essential. Even Niagara’s famed Icewine has one to call it’s own.

In the late 1990s, Inniskillin co-founder Donald Ziraldo found himself observing how the international wine world was embracing Riedel’s wine glasses that were designed specifically to enhance the individual characteristics of each type of wine. It was well proven that the shape and size of the Riedel wine glass did make a difference, but Ziraldo noticed that amid the impressive Riedel glass portfolio there was no Icewine glass. Ziraldo travelled to the many wine shows throughout the world: Vinitaly, Vinexpo and the London Wine Fair, where he was introducing the world to Inniskillin and Canadian Icewine.

Also present at these shows was the President of Riedel Crystal, Georg Riedel. When Ziraldo met Riedel he eagerly asked, “Georg, when are you going to make an Icewine glass?” Ziraldo thought the timing to make a Riedel Glass specifically for Icewine was perfect, but each time Riedel responded: there just wasn’t enough Icewine in the world to support it. Finally, Riedel realized that Ziraldo was not going to give up, so he agreed to conduct an Icewine glass workshop in 1999, which resulted in the Riedel Vinum Extreme Icewine glass. 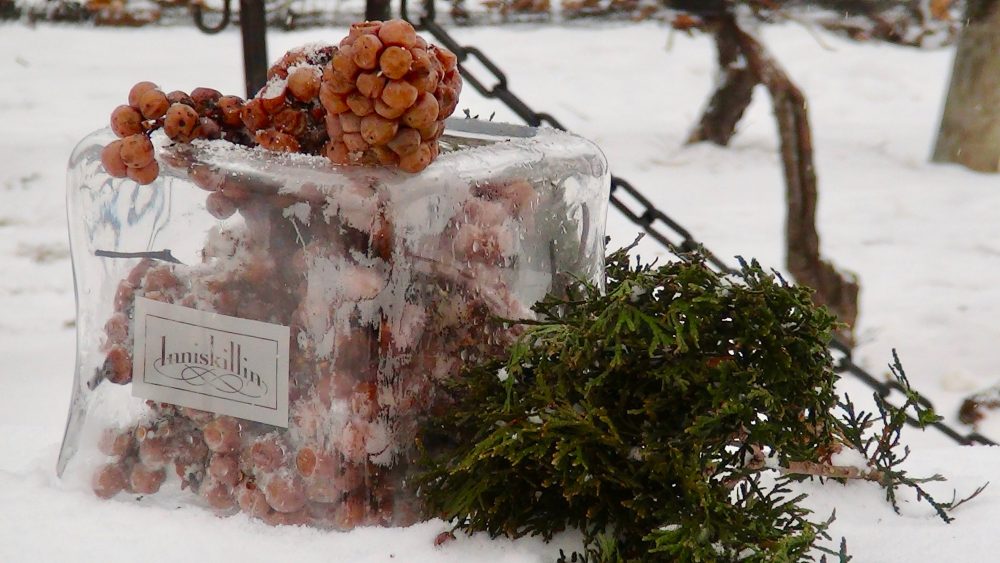 Inniskillin Icewine is well known and highly respected around the world. Its uniqueness as a rich and concentrated specialty wine has taken its place in the world’s best restaurants, among the cellars of collectors and gracing the tables of wine enthusiasts everywhere. The winter harvest to make this wine is certainly extreme winemaking amid extreme Canadian winters and the ultimate glass in which to enjoy it is ironically from Riedel’s Vinum Extreme Series. It took a glass specifically designed by Riedel Crystal to bring out the best of the layers of Icewine’s aromas and flavours.

Many of the 250,000 annual visitors are drawn to Inniskillin to taste and buy the variety of Icewines produced from Vidal, Riesling and Cabernet Franc grapes. When posed with smelling and tasting the Icewine from two comparative glasses—a standard smaller glass and the Riedel Icewine glass—it is always exciting to observe the reaction. Most people strongly believe that the glass could not possibly make that much of a difference but they soon discover that it certainly can and does. The difference is dramatic. The sensual experiences from the aroma and taste from the smaller, standard wine glass are muted and limited, while from the Riedel Icewine glass, they are magnified to the point that the aromas and flavours are three dimensional. During the tasting, the Icewine is poured into the standard glass first and the guests are asked to pour half of it into an empty Riedel Icewine glass to make sure that they know they are comparing the exact same wine! While it cannot alter the wine, it can and does alter the perception of it. 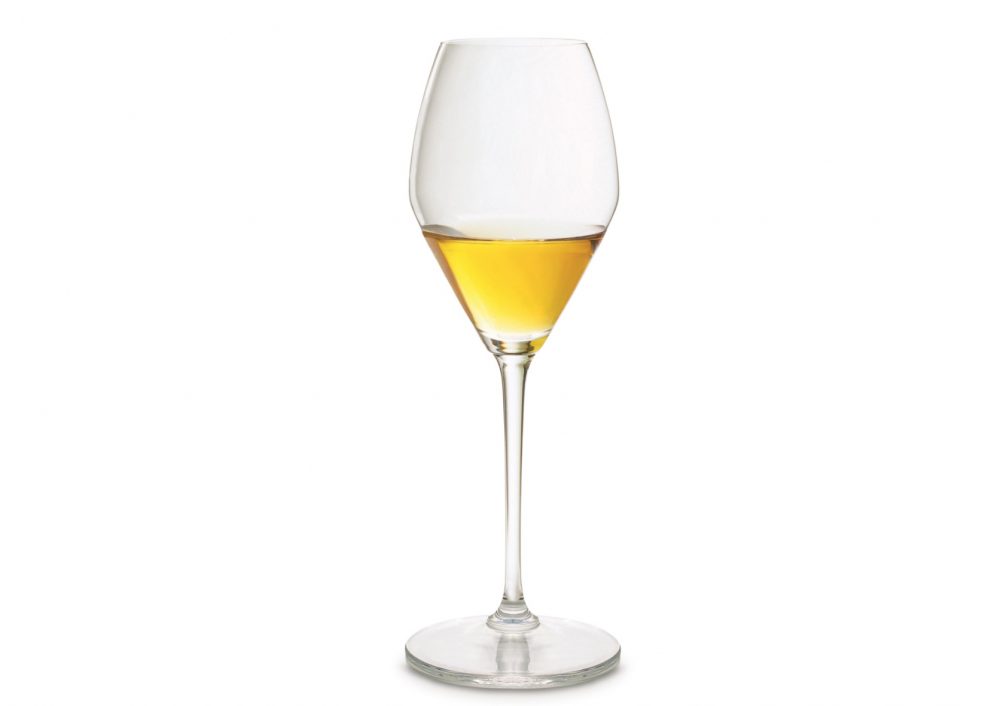 The shape and size of the Icewine glass, which is much bigger and taller than one would expect, maximizes the concentrated aromas and delivers the wine to the back and sides of the tongue thereby covering the areas of the tongue that best profile the balance of the natural sweetness and the natural acidities. With Icewine, it is preferred that the wine not go to the tip of the tongue where sweetness is tasted as that would dominate the taste and not allow for that proper balance.

Inniskillin also has a designated room, The Riedel Room, to host sit-down Riedel glass tastings. Unique to this room are tabletops made from the floor of the Riedel glass factory in Austria where the hot molten glass spilled and burned a very creative design into the wood. Where else can you enjoy wine tasting off the floor?

A Short History of the Icewine Glass

The world’s first ever Icewine glass arrived in October of 2000 after a year in the making. In 1999 a group of international wine experts gathered in Toronto to decide on the optimum shape for the Icewine glass. This tasting workshop was guided by the 10th generation Austrian glassmaker Riedel, Ziraldo and Karl Kaiser, his Inniskillin Wines co-founder. Inniskillin was known as the Canadian winery that both pioneered and earned global recognition for its exceptional VQA Icewines. It was Inniskillin’s unprecedented Grand Prix d’Honneur award at Vinexpo in France, back in 1991, which brought world attention to both Icewine and the Canadian wine industry. Current Inniskillin Niagara Winemaker Bruce Nicholson continues to bring the same high level of recognition, having been the first Canadian winery to win the International Trophy for Best Sweet Wine over 15 pounds (the price, not the weight) at the 2014 Decanter World Wine Awards. 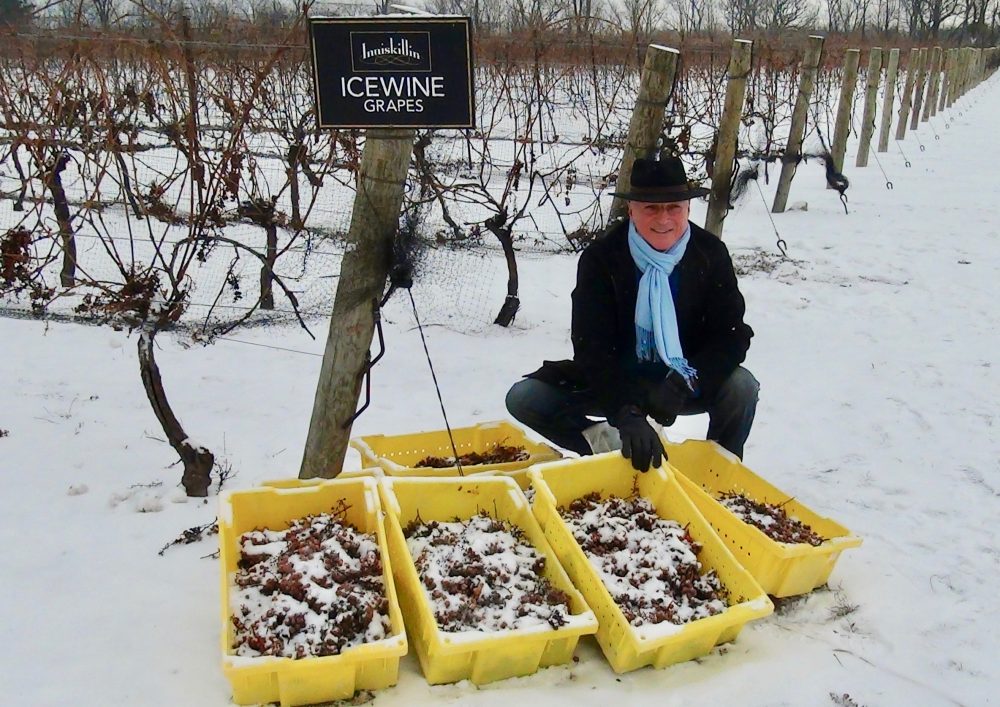 During the 1999 Icewine glass workshop, the wine experts sampled Icewine from a wide selection of glass shapes and sizes, and ultimately voted on their favourites: the Sauvignon Blanc, Sauterne and Vintage Port glasses. The new Icewine glass, an amalgam of those three, went into production as part of Riedel Crystal’s stunning new Vinum Extreme design series. The first shipment arrived in Canada on September 27, 2000, and has been influencing our perception ever since.