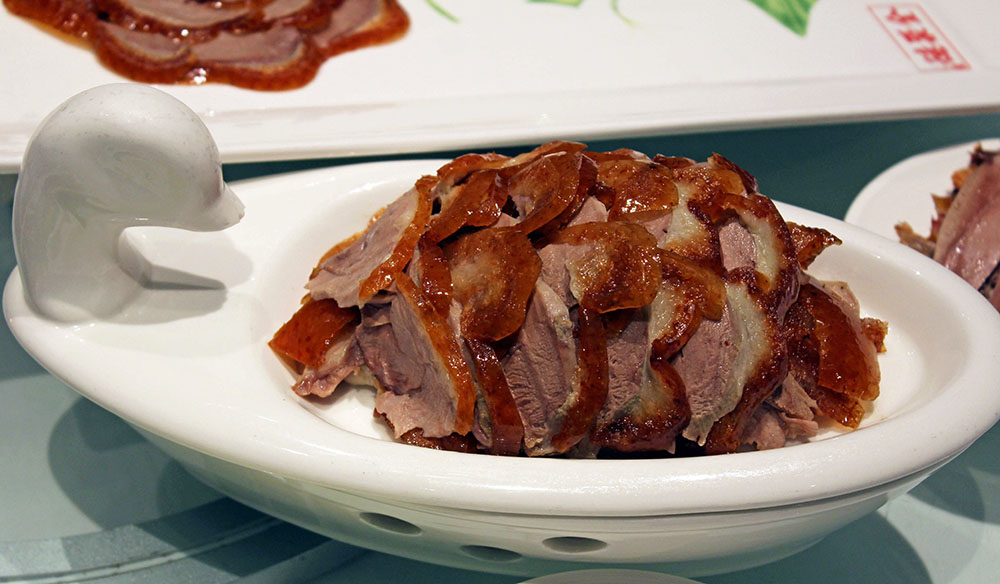 Wine and Dine at Redstone

There are many reasons to visit Beijing: to see what remains of ancient art, history and culture; to shop at the Silk Market and the Friendship store; and to witness the future on a collision course with the past. All of these inducements notwithstanding, for me, it really comes down to the pursuit of exquisite food. Great emphasis is placed on the cultural significance and symbolism of Chinese food. In fact during the Cultural Revolution, most of the Imperial Recipes were destroyed.

I learn that the Chinese word wei means taste, flavor and meaning itself. Sikong Tu, (837-908 AD) of the Tang Dynasty said to a poetic friend, “you cannot speak of poetry if you cannot tell taste.” He goes on, “If poetry, like food, is truly perfect, it is because it contains the tantalizing meaning beyond taste: wei wei zhi zhi. Could I find that elusive poetry today in Peking duck?

On the trail of the perfect Peking Duck, my journey has sometimes been a rocky road littered with dull ducks, flat pancakes and ho-hum hoisin sauce. Until now.

Tuan Jie Hu Roast Duck Restaurant employs 25 top chefs, all capable of preparing an All Duck Banquet. Only when the duck is ordered does the preparation begin. The Chef prepares a 3 to 4 month old white Beijing duck by half filling it with water, sealing the cavities and roasting it over jujube, pear or apricot wood in an open oven. While the chef bastes the duck, the inside of the bird is steamed by evaporating water, creating a duck that is soft inside, with crispy skin. To serve, a skillful chef makes over 100 cuts on each bird.

Apparently, wealthy women in the past, enjoyed eating the crisp skin dipped in fine sugar, a food trend that has thankfully passed. Today, we spread sweet wheat jam on warm pancakes, add sliced duck skin and meat, onion, cucumber, roll it up and eat. Another suggestion is we roll the duck in the pancake with mashed garlic, sweet wheat jam and radish. Wei Wei Zhi Zhi. Taste beyond taste–meaning beyond meaning.

It becomes increasingly difficult here to separate history, legend and reality, particularly at the Beijing International Club. Here, Beijing duck is one dish in a 10 course lunch. Three juicy slices of duck with crisp skin intact come on a plate with plum steamed buns in the shape of lotus blossoms and a packet of shredded scallions tied with a ribbon red pepper.

At the Emperor’s dinner, we feel we’ve tumbled through a Time Machine. It’s part of a program arranged for incentive groups, executive seminars, International board meetings or any like-minded group of 10 people or more.

Just before we enter the great Hall, we’re ushered into an anteroom and outfitted in the ancient silk robes of Imperial China. I choose yellow and pink. Immediately our personalities change. We become more formal, and we girls feel so feminine and pretty. But who can read the individual menus painted on fans carved from fragrant wood. Fortunately they are also printed on a card in English. Silken red tassels and fierce paper masks adorn the banquet table and surround our first course: a wooden boat laden with rock lobster sashimi (a first for me.) A phalanx of condiments, a rush of brilliant flavours of sweet, pungent, salty mysterious herbal sauces.

Between every course there is a magnificent entertainment, beautiful ballerinas dressed in white feathers, graceful Balinese dancers, and the fierce male dancers of the Peking Opera.

Buddha Jumps Over The Wall is a dish with yet another legend attached. Apparently, a monk was so compelled by the aroma of food being cooked outside the monastery, he jumped over the wall to partake. It’s prime ingredient is a chicken that has a black head and a white body, surrounded by black mushrooms and green vegetables. Indeed it is tantalizing enough to entice a monk.

Goblets of French Wine, and the liquid fire Mao Tai rice wine, have us almost believing this last entertainment. Costumed bearers bring in a covered sedan chair, and out jumps an adorable child, a three year old boy dressed as the Last Emperor, who runs along the room to sit on a huge throne. Blame it on the liquid courage of Mao Tai Rice Wine. I boldly walk up the steps to that throne, pick up the tiny Emperor, sit him on my lap and we both smile for the cameras. I have the photos to prove this audacious act.

A small but potent finale. Eight Treasure Tea relates history and tradition in a cup. Eight legendary figures are depicted in Sichuan dried dates, wolfberries, walnuts, ginseng, Jasmine tea, Longan, raisins and rock candy sugar. An ancient pot with a 3 foot spout is held high as the server pours boiling water into the cup and immediately covers it with its lid to steep. And there is the wei again: message and flavour, purpose and taste.

Wine and Dine at Redstone