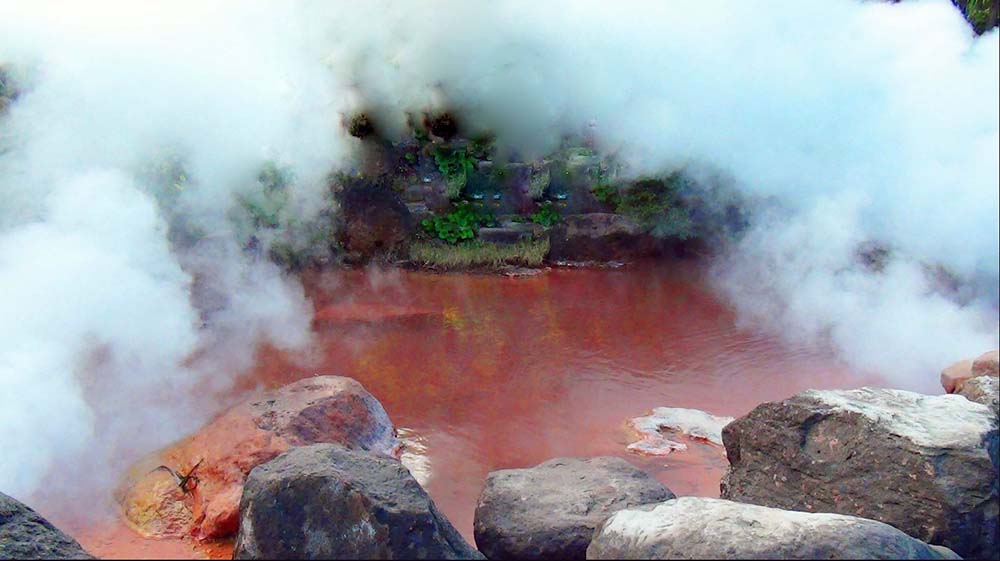 “The path to paradise begins in hell” – Dante Alighieri

I am on a tour of Hell in the city of Beppu, Oita on the beautiful southern island of Kyushu, Japan. Serene and inviting, the cobalt blue water of Ume Jigoku (Sea Hell) emerged during a volcanic explosion a millennium ago. Its billowing bursts of steam from 200 metres deep are blistering. I continue past my second hell, Oniishibozu Jigoku, where boiling mud slowly bubbles up to appear like a monk’s shaven head; and Shiraike Jigoku, named for its piping-hot milky water. At the murky Kamado Jigoku, a demon statue oversees boiling ponds. Drinking the filtered water here is like sipping hot tea from a Sprite can. While hand and foot baths are tempting, the allure of Oniyama Jigoku (Monster Mountain Hell) beckons. This lugubrious pond is kept watch by crocodiles writhing and slithering as they snap their jaws for food. The intense force of its steam can pull one and a half train cars. At Chinoike Jigoku, the Blood Hell, hot water from deep within the earth melts clay and seethes a bloody red. Its mercurial glow is hypnotic. 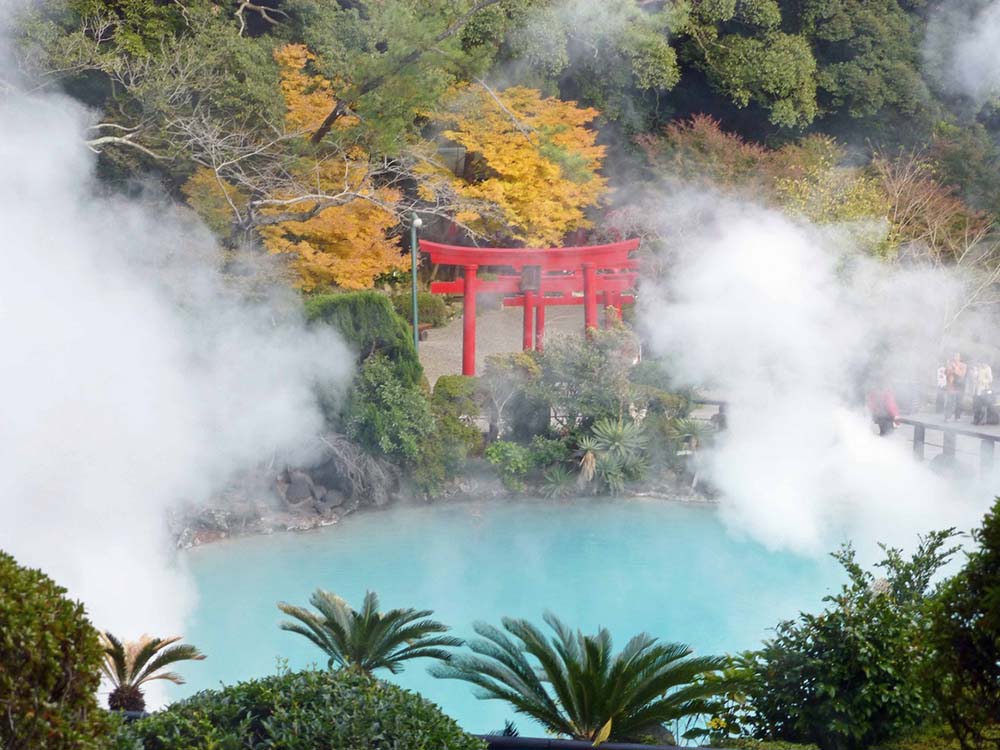 Healing powers are discharged as thermal waters well up across Japan’s volcanic island arc. Beppu is like a furnace of 2,900 steaming spouts venting 130,000 tons of water each day. While the Hells are too hot to touch, immersing in hot springs is a Japanese way of life— their mineral compositions are therapeutic. 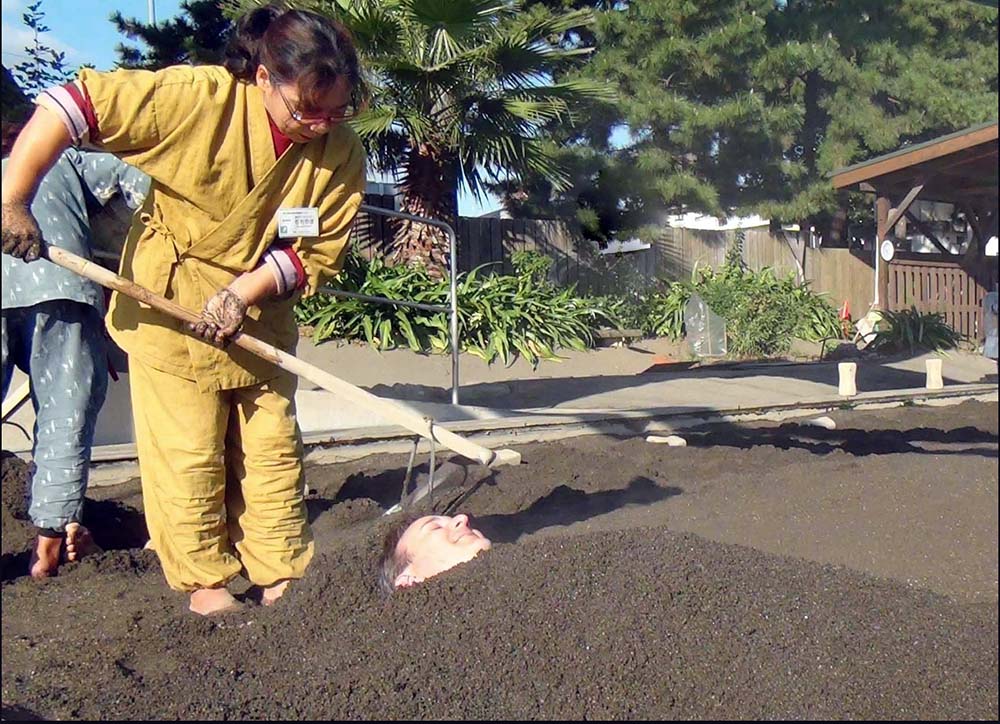 Lying in warm dark sand by the seashore, I’m approached by two elderly women in uniform carrying shovels they’ll use to bury me. Packed in thermal heat, the sand bath at Kaihin Suna-Yu is purported to affect muscle aches, cuts and burns, and relieve tiredness. I feel a total vibrancy throughout my body. A small yellow umbrella is planted to cover my head from the sun as I bake. Hoyo Land is a multi-level mud bath in which I wade into thick warm mud while wearing only a teensy cloth to cover myself. It’s a little disconcerting at first, but the result? My skin is so soft! Patrons come here for healthy skin, and to ease rheumatism, hernias and diabetes. My last hot spring of the day before I completely turn to mush is the Kannnawa Mushi-Yu aroma bath. Crawling through a one-square-metre wooden door, I enter a small hot stone room, lie on a bed of herbs heated by thermal steam, and inhale. More powerful than a sauna, it’s the ultimate relaxation for nerves, muscles and stiffness. 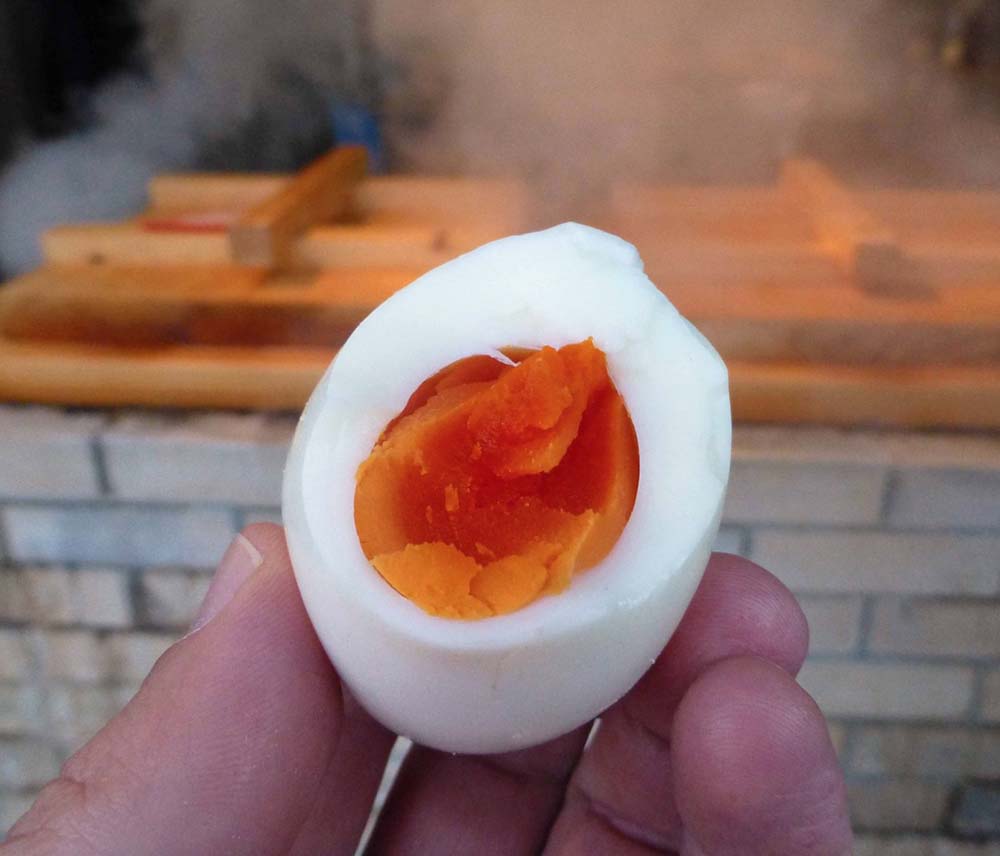 Locals read the newspaper while enjoying outdoor neighbourhood foot baths. Scolding hot steam is also used for cooking at hell’s kitchen, Jigoku Mushi Kobo, where I’m handed a basket of three colanders to lower into a pit of sulfuric steam. The first contains eggs that I soon remove to find the softest, most glorious fiery orange yolk I’ve ever tasted. The second contains vegetables, like pumpkin, that cook to divine texture and sweetness. The third is a seafood medley of shrimp, scallops, squid and oysters that are steamed to their optimum integrity and flavour. It’s the sulfuric steam that elicits softness and sweetness. Temptations abound as Oita’s specialties include delectable blowfish, the largest cultivation of shitake mushrooms, and the ancient village of Kitsuki (where one can dress as a samurai for a day), but my journey continues north. In the Japan Alps of Nagano lies another hell, Jigokudani. Monkeys rule this hell…Snow Monkeys. 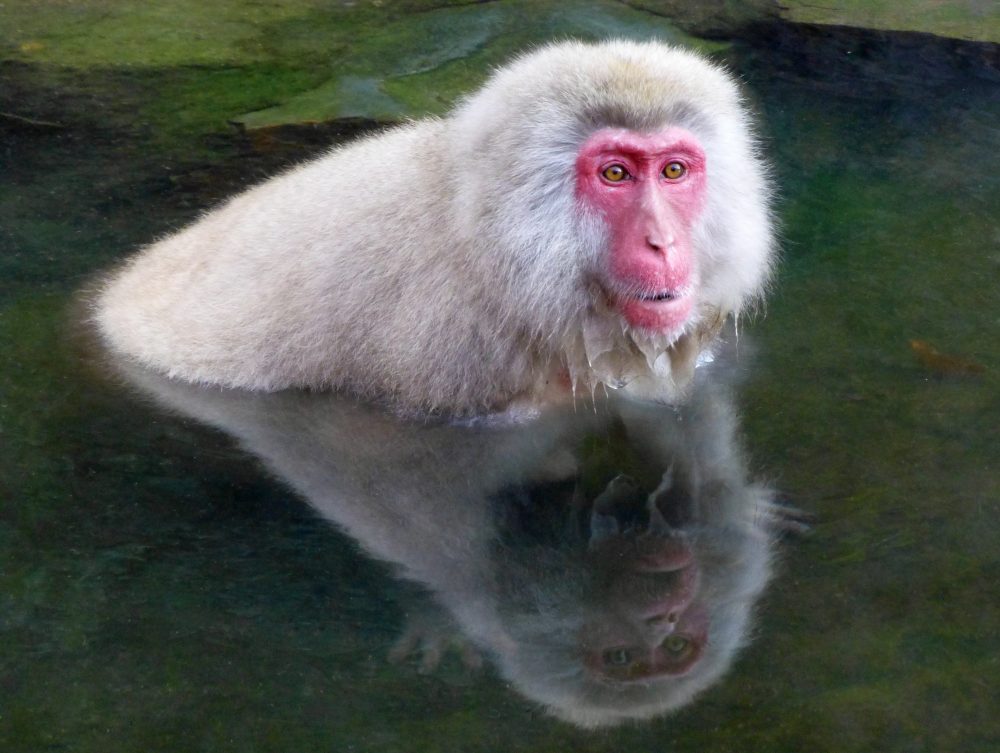 Descending from mountain treetops like a scene from Planet of The Apes these monkeys—the only kind of their species that live this far north—plunge into the steaming hot springs below. Much to the chagrin of the locals, they have staked their claim. Walking through the forest, the crisp mountain air is reinvigorating. Before long, I spot one monkey perched on a stone, then two in an embrace. As I reach nearer, monkeys are frolicking all around me. They are totally preoccupied with themselves, and probably the most relaxed monkeys I’ve ever seen. It’s their own spa, and they pamper and groom each other while lazing the day away. It doesn’t take a monkey to figure out that when it’s cold outside, you hop into a warm bath.