“Steamy bowls of rich creamy justice” were doled out during the infamous trial of Fred Quimby versus a French waiter on The Simpsons. Is the correct pronunciation: shaow-dare or chowda? Either way, there can be no debate about where to find the best chowder in the world: Nova Scotia. (Insert mic drop here.)

Unlike New Clam Chowder, Nova Scotia chowders are typically thickened with potatoes rather than a roux or cream. Passionate Chefs pair the bounty of the cold, clean east coast waters with fresh produce from the lush fertile valleys to create their own unique interpretations. Scallops from Adams & Knickle are the size of hockey pucks. Eel Lake Oyster Farm’s oysters, with their sweet cucumber taste, grow to a three-inch jumbo size. Plump mussels fill up their shells. Lobster, salmon, haddock, cod, snow crab, shrimp and potatoes for which Nova Scotia is renowned are the highest quality in the world.

Nova Scotia wines pair beautifully with seafood and chowder. The appellation, inspired by the sea, is Tidal Bay. Gaspereau Vineyards’ offers a bright, off-dry blend of Seyval Blanc, Vidal Blanc, Pinot Grigio and Muscat. Benjamin Bridge‘s Tidal Bay is a blend of L’Acadie Blanc, Ortega and New York Muscat grapes that shows the fresh minerality of the ocean breeze. These crisp cool-climate wines have the right balance and acid structure to cut the creaminess of chowder. It’s like they were made for each other. 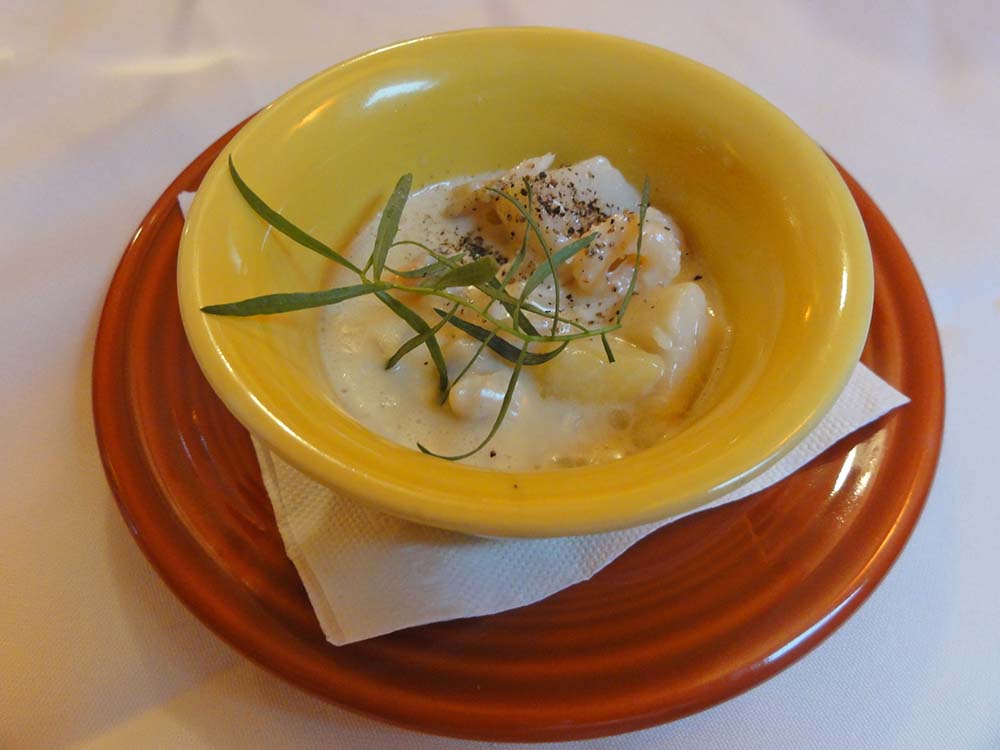 Who among Nova Scotia’s Chefs makes it the best? Well we just have to taste and see! It’s a grueling trek—scaling mountains of seafood that luxuriate in velvety broths perfumed with notes of sweet and spice—but we have to try. Our favourites are listed below *in no particular order.*

1. Hall’s Harbour Lobster Pound (Centreville): Our chowder experience includes picking our own lobster, weighing it and carrying it over to the cookhouse. Our host shows us the difference between male and female, and left- and right-handed lobsters, and just in case it’s ever necessary, how to make a lobster go to sleep. (Pro Tip: curl it up and stroke it’s tail.) 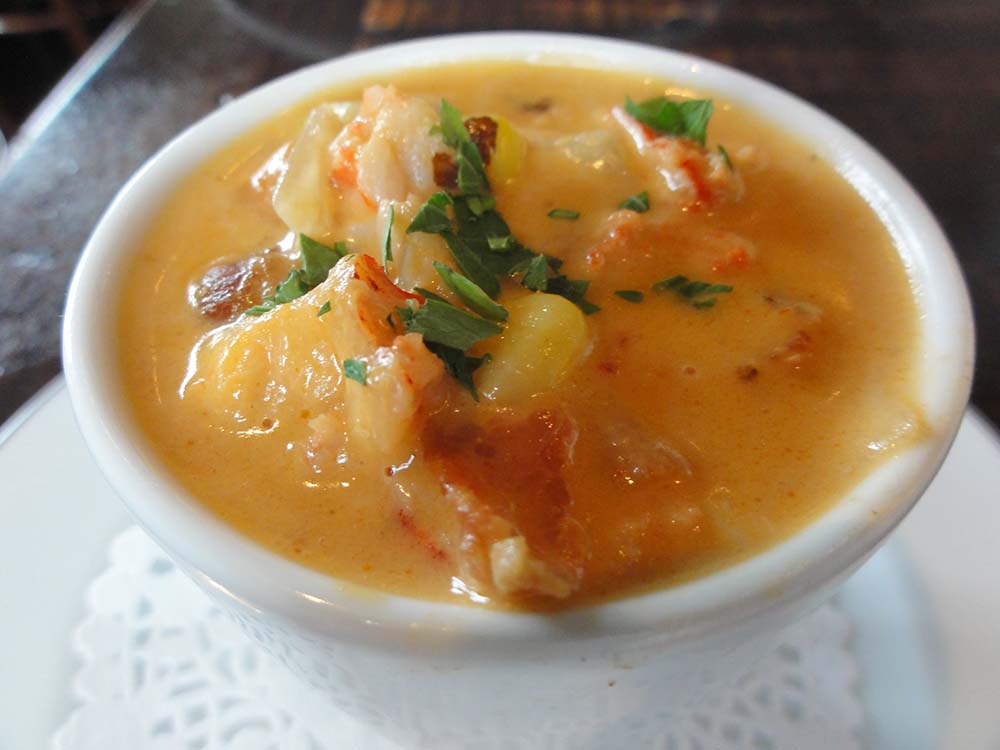 4. Grand Banker Bar & Grill (Lunenburg): A gumbo-style stew of haddock, scallops, jumbo shrimp and muscles simmers in a rich Cajun broth that we ladle with pleasure.

8. Ela! Greek Taverna (Halifax). Here the chowder is so hearty it’s served as a main course. With spoon in hand, I reel in salmon, haddock, shrimp, scallops and lobster lavished in creamy goodness. 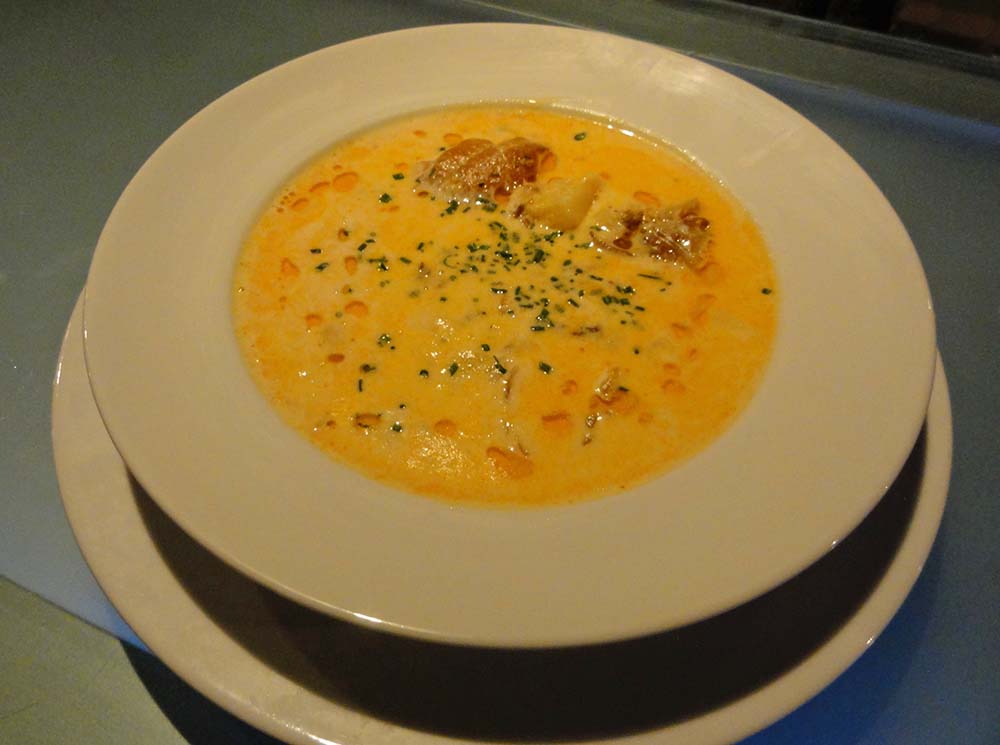 9. Chives Canadian Bistro (Halifax): An early proponent of the local food movement, Chef Craig Flinn’s menus are the ones to watch. His chowder of parsnip and celery root with lobster cake, grilled prawns, mussels and summer corn relish is essentially the best of Nova Scotia in a bowl.

10. Just about every single other restaurant across the province of Nova Scotia…

Every bowl tells a different story, and everyone has their own favourite. Each one represents the bounty of ingredients and creativity of local chefs and the warmth of the the people who live here.

Yamagata Beef at Han No Daidokoro in Tokyo