Designed Interiors That Give You ‘The Lift’

Across Canada, there are almost a thousand craft breweries making 7,850 brands of beer with audacious names and unique flavours. Here is one beer sample from each Canadian province, made with love and home-grown ingredients. A few cold ones and a few laughs are the best ways to celebrate Canada everyday, coast to coast. *(At the time of this writing, not every brewery called is in operation. These ones are.) 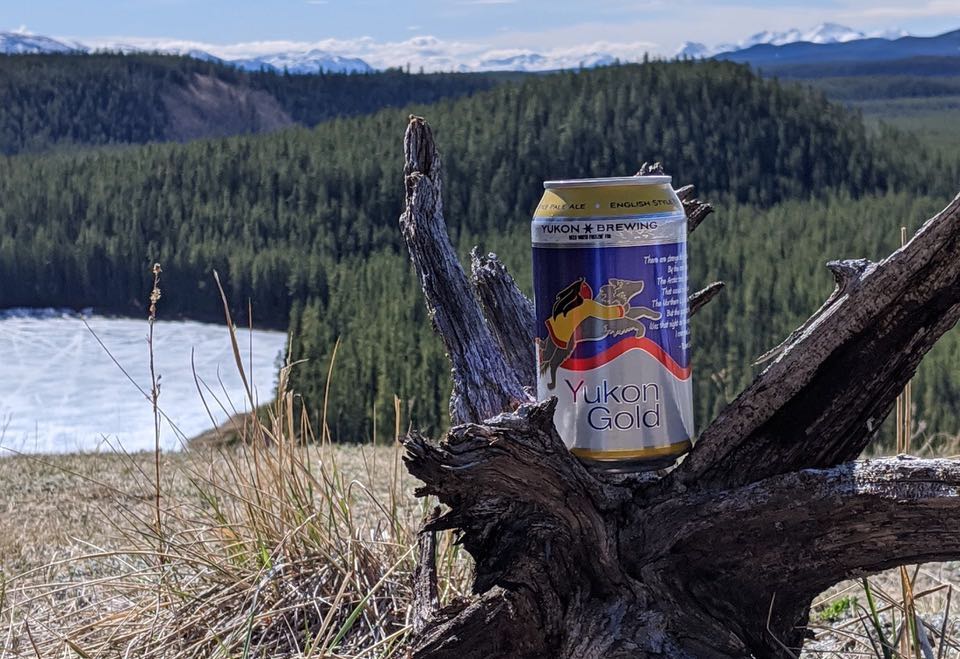 The Yukon’s number one selling draught (yes, including the mega-breweries). It is golden in colour, brilliantly clear, and clean across the palate. The mix of 5 malts provides subtle character in the body, and the addition of malted wheat provides a slight, but characteristic citrusy finish. Hopped with noble Saaz, Sterling and UK Golding, the bitter is barely perceptible, but mild hop flavours linger in the after-taste; the dry, clean finish provides a refreshing perk at the back of the palate. The full package mimics the classic milds of the British Isles, with a bit of Yukon spirit, just to make sure you remember what part of the world it’s from! Owners Alan and Bob conceived their idea around a campfire on a canoe trip in 1997. From that inaugural conversation grew plans for a craft brewery that would service the north with quality beer & spirits while keeping jobs and money in the territory. The artwork on the package and label was created by Artist Lynn Blakie. Her piece captured the gold that’s present not only in the soils of the Klondike but in the spirit of the north.

An Imperial Stout, fermented initially with Arset Kveik (a Norwegian farmhouse ale culture) in stainless steel fermenters for one month and then aged for seven months in French oak wine barrels. It has a moderately dry finish despite its strength and extreme depth of roast and caramel flavours. With four more months of conditioning time in bottles, that is 12 full months! “The name Spilled Ink means more to us than just a reference to the pitch-black colour of the beer. It evokes imagery both of experimentations (spilling ink and seeing what works) and of building on all the prior art that’s come before.” 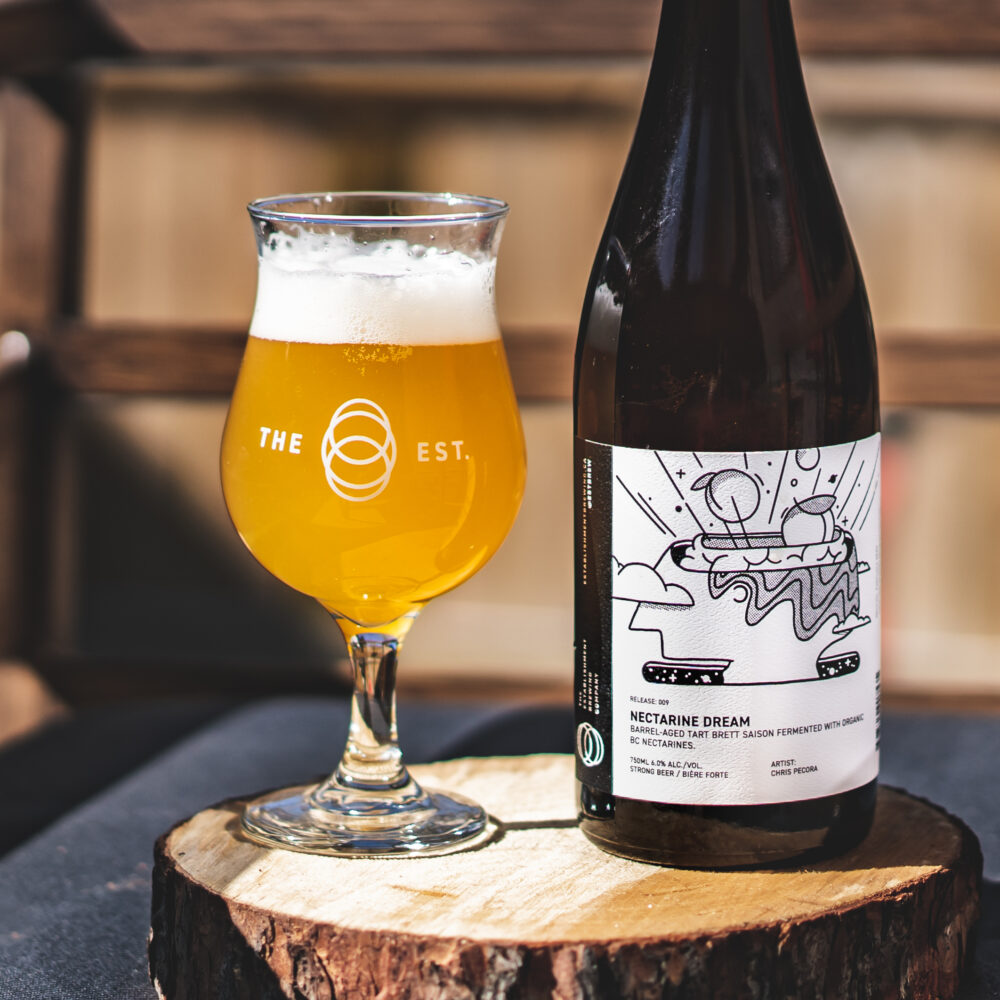 A labour of love a year in the making, it is tart, a bit funky, and has an amazing nectarine aroma. Our team spent a whole day last summer hand-pitting organic fruit from a BC farm run by a guy named Tree. Our process draws its roots from traditional Belgian brewing traditions where it is fermented first and then slowly soured over many months in barrels. The wild yeast and bacteria from the skins of the fruit is what slowly sours the beer and gives it a more complex flavour. The result is a bright, fruity, approachable barrel-aged sour. The illustration on the bottle was created by local artist Chris Pecora. 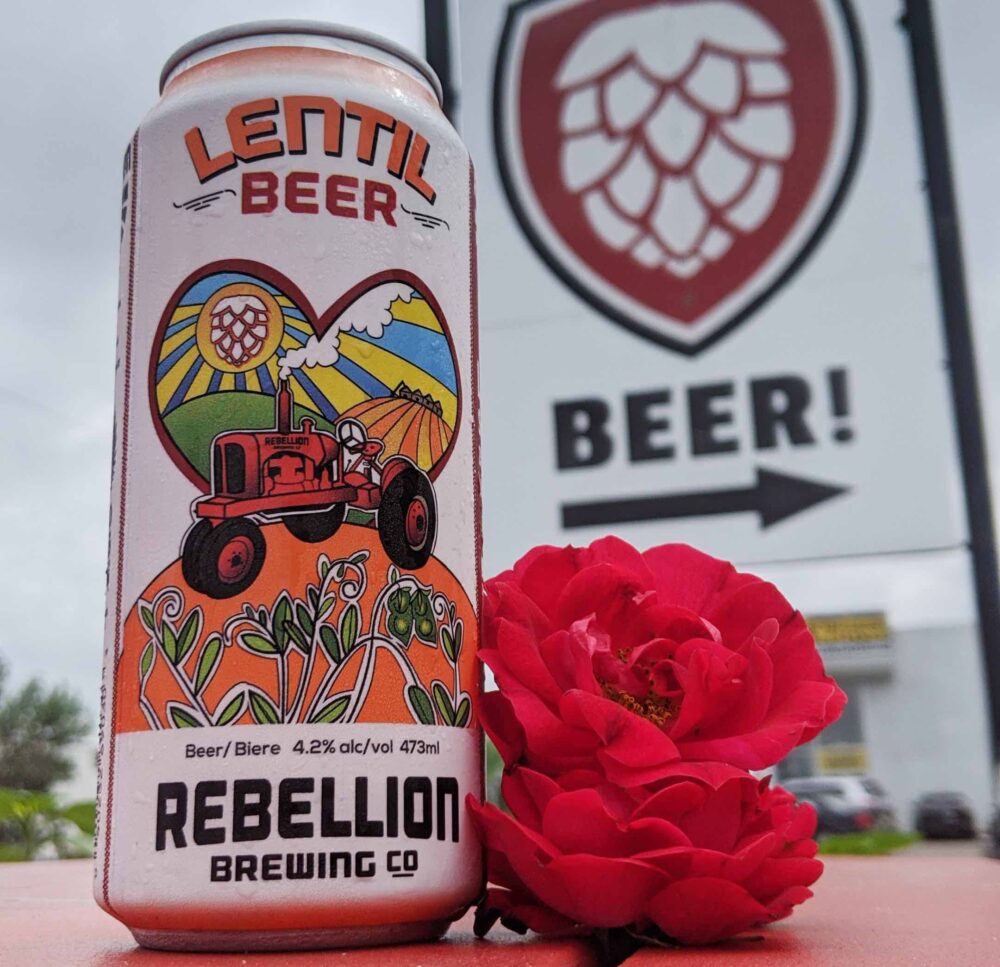 Rebellion’s Lentil beer is a Saskatchewan favourite and our number one selling beer. It’s easy drinking, smooth, golden in colour and light and refreshing. It’s a unique beer, and the only full-time production beer that uses lentils world-wide. We call it the perfect patio pint, great for sharing with friends outdoors on a hot sunny day. It pairs well with nachos, fries and chicken wings. The Lentil beer is lightly sweet, low in bitterness with a crisp, clean finish and no lingering after-taste. The beer features King Red Lentils, which were developed at the University of Saskatoon specifically for Saskatchewan’s climate and soil conditions. The high protein content of the lentils gives the beer extra body and creamy character compared to beers of a similar style. The rad red tractor artwork was designed by Adrienne Ray, a Regina-based tattoo artist who runs the Golden Spider tattoo shop. The art celebrates the hard-working farmers who make the crops we use in our beers. 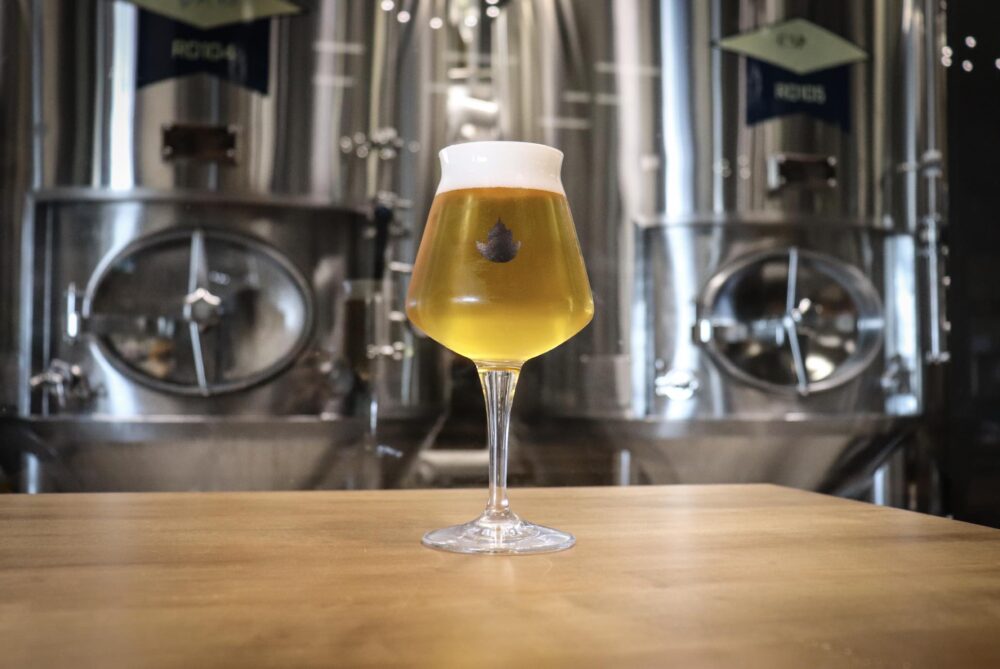 Farmhouse Saison boasts notes of herbaceous spice and citrus with a subtle funk earthiness. Inspiration: our Farmhouse Saison is an homage to the rich agricultural history of Manitoba. This style was traditionally brewed in Belgium by farmers for their farmhands to keep hydrated while working the fields during the hot summer months. It showcases the nuances and complexities of brewing with the wild yeast found naturally in these farmhouses. Farmhouse Program: we brew several different Farmhouse Saisons, including our Solera Farmhouse Saison – Aged 12 months in our French Oak Foeder and released each year for our Anniversary. We also brew a Farmhouse Radler, using our Farmhouse Saison that is blended with in-house made juice. 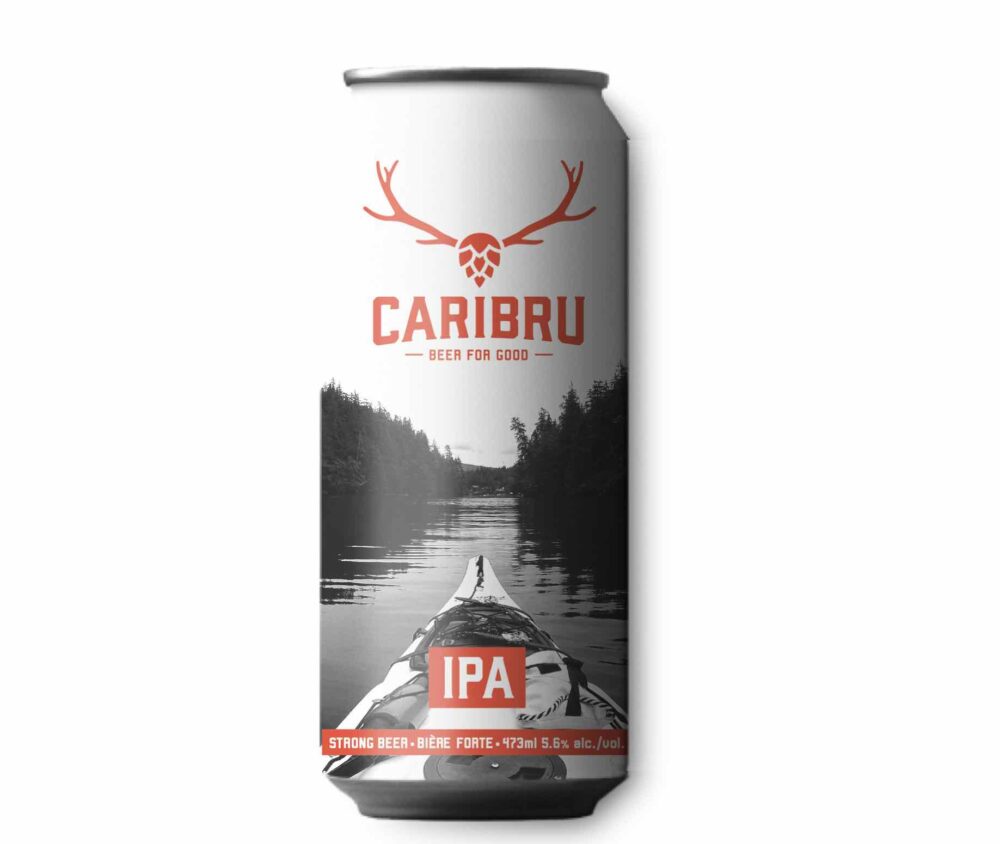 Using West Coast, New Zealand hops and a hint of fresh mango, this ale shows aromas of mild mango and citrus. These lovely subtle hints and grain flavours lead to a finish of pleasant hop bitterness. A truly approachable IPA and socially responsible beer, Caribru gives 5% of every sale back to local charities via our foundation Caribru Cares. 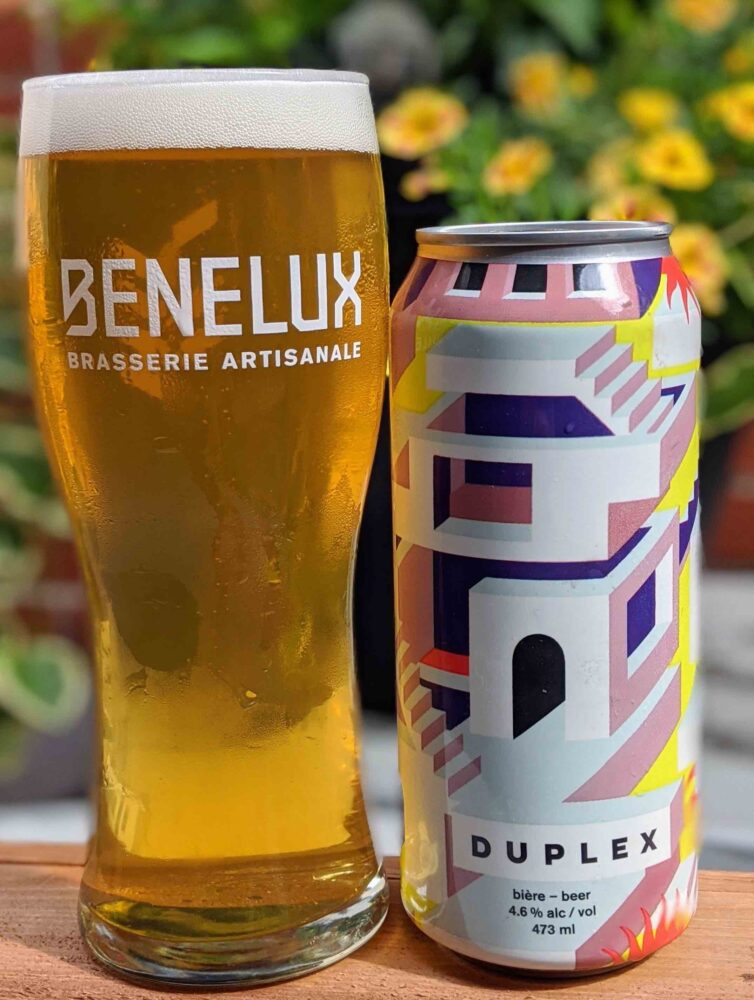 Duplex is our blonde Lager brewed to the requirements of a Hells, a traditional style from regions in southern Germany, Bavaria and Franconia. A flavourful and a crisp beer, crowned with a generous and fluffy white head, which at 4.6% alc/vol, will surly quench your thirst. With its moderately-low bitterness and subtle floral hop aromas Duplex is a showcase of continental European malts imported from German maltsters with long tradition of producing renowned brewing malts. If you have ever been to Montréal during the heat of the summer, you will often find neighbours siting on their balconies sipping on a crisp and refreshing beer and chatting about current state of affairs. Duplex is our tribute to those who love life and a good beer among friends.

A rich and dark mahogany colored German-style Lager with a nice tan head. Complex and refreshing with a taste of smooth chocolate and a light toasted cracker flavour that finishes with a quick clean and light finish to the palette. The Hercules was the first wood fired steam locomotive delivered from the U.K. in 1854 to Pointe du Chene wharf. In winter it was pulled by on a bobsled by a large team of horses to Shediac to begin construction of the European and North American Railway. The name Flying Boats and our beer names in general are a nod to the history of transportation in Southeast New Brunswick

This kettle sour is truly something special. Brewed with loads of real strawberry, rhubarb, and black raspberry, this beer has the perfect amount of sweet upfront, with a nice hint of sour to finish it off. And believe us when we say it’s as delicious as it looks! The vibrant pink colour makes this beer as pleasing on the eyes as it is on the tongue. 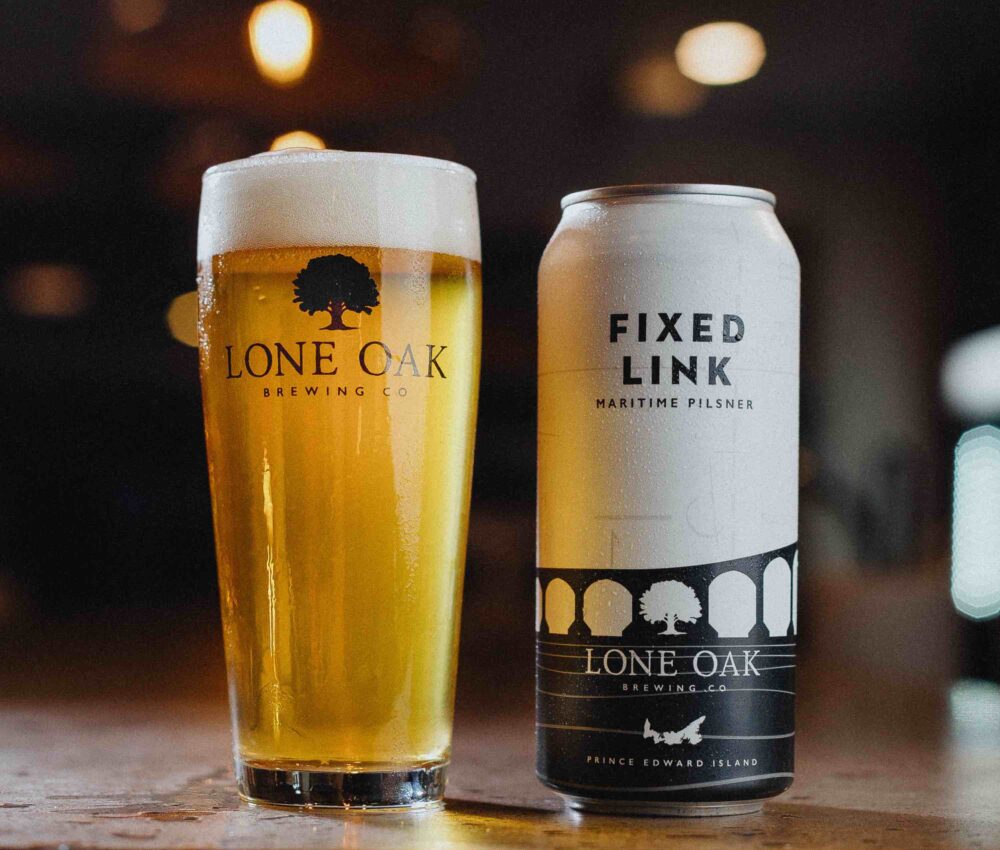 Our pilsner is a representation of Maritime flavour. Made with all PEI malt and New Brunswick hops, Fixed Link is an effervescent German inspired Pils that is clean, bright, and full of flavour. Light bodied with a snappy bitterness our pilsner can be paired with a wide array of foods, from strong cheeses, to spicy cuisine.

Designed Interiors That Give You ‘The Lift’