When I was told I would be attending a performance of Shinto theatrical dance, I immediately asked, “How long will this take?” And yet, from the moment it began, I was absolutely riveted.

Far away from the hustle and bustle of neon Tokyo, the pulse of Heartland Japan beats to an ancient drum—one that is rooted in the past and maintains customs and traditions that big city traffic has long since passed. The silence of the river stream, the purity of the water, the lush forests and warmth of those who are sustained by them give pause for thought and remind us to breath. Shimane Prefecture in western Japan has long been an off the beaten path destination for tourists who typically stick to the Tokyo-Kyoto-Hiroshima site-seeing route. Slowly but surely, visitors are catching on, and looking to this pristine stretch of forests, rivers and mountains along the Japan Sea Side as the next frontier.

After a day of hiking, relaxing in the Motoyu hot springs, and dining on local river fish, our Heartland Japan group convenes at the local shrine in Yunotsu to watch a performance of Kagura.

Unlike other Japanese ceremonial arts like Noh or Kabuki, the living tradition of Kagura that flourishes mainly in Shimane Prefecture is highly charged. An English pamphlet tells of the folkloric tradition and the fable that is about to be re-enacted, but the performance is so alive that it’s easy to follow along. 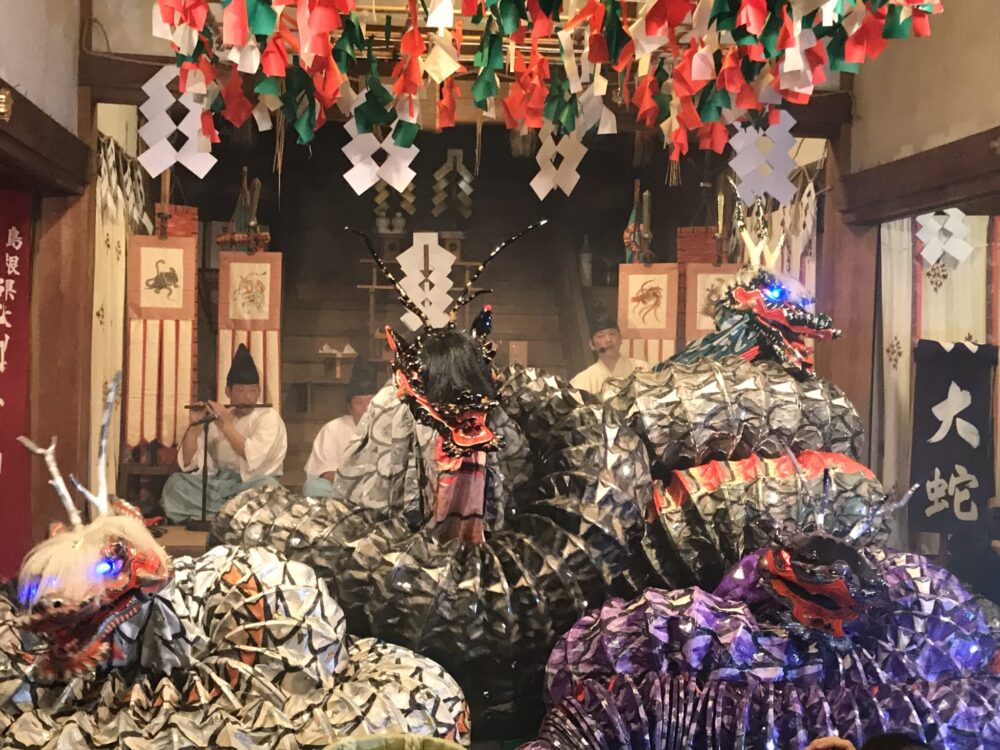 As the tension mounts, the flautist and percussionists intensify their playing to a rising crescendo, whilst on-stage masked-performers uncoil their giant serpentine costumes in billowing smoke and fire. How they avoid entangling themselves, I have no idea. The costumes, surprisingly, are all made of paper, but the colossal size and length of each is quite heavy. It’s obvious that these performers are all, necessarily, in phenomenal cardio-shape. As they dance and consume every inch of the stage and proscenium, I’m on the edge of my seat with excitement. One by one, the protagonist smites off their heads with his shining sword.

These performances bring folktales to life. The dancing, the constant movement, whirling and twirling, is an electric energy that amazes us. We want to see more. We want to know how they trained, what’s their diet–we even return a second night to watch them rehearse. Across villages there is diversity in the folk dances and the folk tales, but the rising climax of each performance follows the same formula. 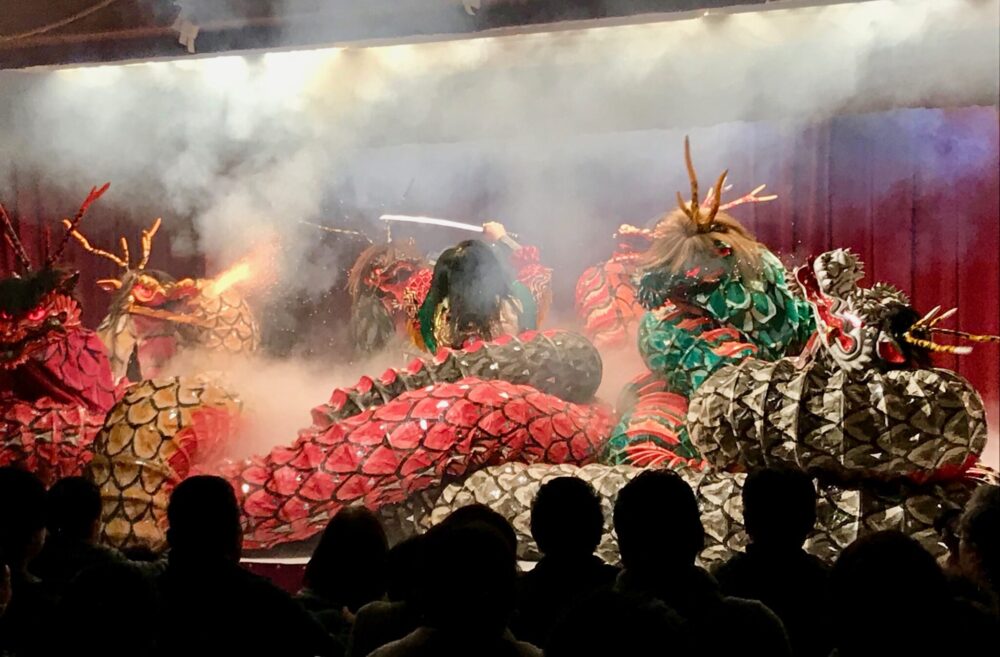 Shimane Prefecture is revered for its Izumo Shrine, the tallest shrine in Japan. This is where the Gods descended to form the islands of Japan, and where they all reconvene each year to address the past and the future. It’s a spiritual land, Heartland Japan, and its tales are told through ancient time-honoured arts, like Kagura: entertainment for the Gods.