On the northern slopes of la Sierra de Francia, in the southern part of the province of Salamanca, Spain, lies the remote village of La Alberca where men with donkeys carry their work loads; an elderly woman tolls a bell at dusk for the departed souls in purgatory; and the prized Iberian pig is the village pet.

A trip to this World Heritage town is a fascinating glimpse into a long ago time. Cobbled streets lead to a central square where a statue of Jesus towers over a fountain serving as a walk-up saloon for the village pets, including the San Anton pig. Alternately roaming, lounging, or being fed by neighbours, “el marrano de San Anton” is an annual gift to the village from Fermin Iberico. He roams freely. If he arrives at a local villager’s door, they must feed him, and if it’s in the evening, they must provide him shelter. On San Anton’s Day, a village-wide raffle is held in which the mayor awards the winner the pig. The earnings are donated to a non-profit organization—a modernization of a 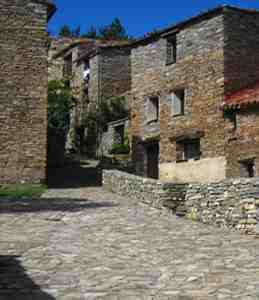 The Iberian pig is highly sought after, because the Jamon Iberico is one of the world’s ultimate delicacies. There are more than 300 producers in Spain. Fermin Iberico, located just outside La Alberca, was the first to begin exporting to Canada in the spring of 2008.


What makes Jamon Iberico so special begins with its breed. The black pig, pata negra, restricted to the western region of Spain, is born with a genetic defect that causes its fat to be absorbed into its meat. Fed a diet of barley and maize, the Iberian pig chews more slowly than other breeds, and is less productive. Between fall and spring, oak trees drop their acorns, at which time the pigs roam in oak groves and pastures to feed naturally on the acorns and grass. This exercise and diet ultimately have significant impact on the quality and flavour of the ham. The pigs that have passed to this stage are of the highest 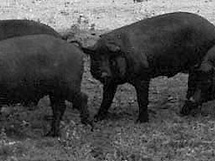 One of the main ingredients in Jamon Iberico is time. After salting and drying, the curing process requires between two to three years—a much longer time frame than for prosciutto, which can cure in nine months. The fat content is relatively high compared to other breeds, which enables its smooth texture and rich taste, but much of the fat is the cholesterol-reducing oleic acid. Hence the pata negra’s nickname, “the four legged olive tree.”

Typically one eats it on its own, or with tomato, toasted garlic bread and Manchego cheese, but it really doesn’t need anything else. While in Spain it can be sampled at any ham and tapas bars.