Indianapolis is a culture shock to an eastern big-city dweller. It is brimming with friendly mid-western hospitality, a trait that elsewhere might be looked on with suspicion. The stars and stripes fly from homes and patriotism is ingrained. On Sunday evenings, there are Porch Parties, where neighbours visit each other’s “rocking chair” porches. Generosity of spirit is a fact of life here. Its corporations are philanthropy-driven, and create cultural landmarks and events that enrich “Naptown,” as it’s residents fondly called it. One of the world’s most “liveable” cities, Indianapolis is a place where it is still possible to fullfil the American Dream.

Waiting for a traffic light to change, I see a plaque embedded in the sidewalk: “Indianapolis Cultural Trail A Legacy of Gene & Marilyn Glick.” What a novel idea, an adjunct lane to the sidewalk for biking, jogging or walking, rather than a bike lane on the street. Sixty three million dollars was spent on this Cultural Trail that connects the cultural districts to neighbourhoods, and $26 million was spent on public art. And yet, no taxpayer dollars were used in these community enrichments. The Trail connects cultural districts with neighbourhoods and leads me to the Eiteljorg Museum of American Indians and Western Art. The nationally recognized Contemporary Art Fellowship program has furthered the careers of native artists. The current exhibit is heart-warming.

Dogs: Faithful and True explores the enduring presence and contributions of dogs as companions, workers and heroes. The Eli Lilly Pharmaceutical Company, headquartered in Indianapolis, is known for much more than Cialis and Prozac. A quick 10 minutes from town, the hidden 100-acre Virginia B. Fairbanks Art and Nature Park and “Old-fields” Lilly House and Gardens is both a beautiful drive and a walk. Lilly has contributed greatly to the enhancement of the city. The Museum of Art has taken Robert Indiana’s weather-worn “LOVE” sculpture inside for some much needed TLC and installed it near the entrance. A team of horticulturists landscape and care for these 52 acres of grounds. Local artists have designed a Mini Golf course on the grounds with Nature as the theme. Looks easy, but just try to get that ball into a whimsical baby dinosaur.

At the Indy Zoo, I wait in anticipation in a central square for the flock of brightly coloured Macaws who have been trained in a flight pattern across the Zoo. Spreading their enormous wings, they zip right over our heads to a sturdy perch where they chatter for a few moments before winging back to their aerie. Then it is on to the new $26 million International Orangutan Center to see the family and the new baby. I smile at this cutest of creatures curled in his mothers arm, and I am positive that he smiles back. 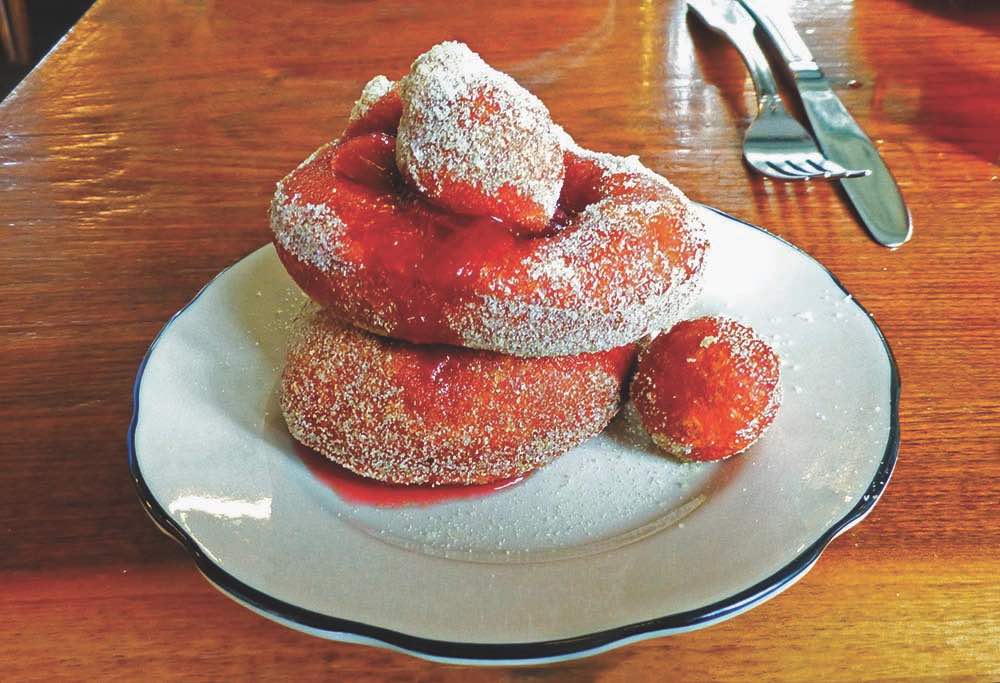 At its core, this is an agricultural state, and chefs thrill to organic, quality ingredients in their own back yard. Breakfast in a garage? I’m game. Milktooth has made an impact locally and nationally because of Chef Jonathan Brooks creative fun with ingredients. With coffee come purple sweet potato doughnuts. (You won’t find these at Tim’s.) Order oatmeal and receive a bowl of aggressively healthy Ancient Grains Porridge with coconut milk, plum jam, hemp seed and pistachios. And bacon, which seems to be a staple at every table, is a huge slab, dripping with sorghum glaze.

Vida is a new restaurant with a reputation for a noteworthy menu, and an entire wall with a hydroponic garden of delicate greens—some of which make up my first course. Servers are well versed in every esoteric nuance: silken foie gras comes on buttermilk brioche with pickled plum, port, candied pecan and concord grape reduction. Beef shortrib goes Asian with udon noodles and soy-mushroom broth. I could have the gorgeous homemade bread for dessert, but that’s not encouraged.

St Elmo’s Steakhouse opened in 1902, and they’ve never had a slow night. After a century, there was no choice but to expand. Harry & Izzy’s (named after two now-deceased owners) opened next door, and exceeds all expectations. A luscious globe of Burratta perched on sturdy greens; a New York Strip Steak that defies criticism, shares the plate with two thin and crispy-delicious potato pancakes that vie with my mom’s. At the Indy Victory Banquet at the JW Marriott, guests, in black tie, enjoy cocktails at Osteria Pronto. Exec Chef Michael Leach, a veteran with the chain, takes ownership of the menu with salad caprese; filet of beef and jumbo prawns; dessert is individual Sacher torte. It’s an example of his honest menu that fulfills the needs of an international clientele.

Before heading to the airport and home, we stop at the Loft Restaurant at Traderspoint Creamery for a real farm lunch. A cheese board of Aged Artisan Collection, including Fleur de la Terre and Sheet’s Creek Cheddar made with 100 percent organic grass-fed milk, served with garden fresh vegetables, fig jam and kitchen-made bread is farm to table in the truest sense. This is food raised in harmony with the land, and you can bet, devoured with appreciation. And yet, there is so much I did not get to do! I didn’t Cross the Bricks at 200 mph with Mario Andretti; nor did I cruise along the canal, sipping champagne in a Gondola with a singing Gondolier. Next time. Next time.

I’m In A Miami State Of Mind