The Haskap Berry, also known as Honeyberry, or Blue Honeysuckle, or Edible Honeysuckle, or Sweet Berry Honeysuckle, or Swamp Fly Honeysuckle–or we can just refer to it by it’s Latin name, Lonicera caerulea–is enigmatic for its unique nutraceutical qualities as much as for its journey to Canada to become the most sought after “super berry” today. Originally grown in Siberia, it is an extremely hardy northern climate bush, and can withstand winter temperatures of -47° Celsius. When introduced to Japan centuries ago, it became known as “Hasukappu”, meaning, “gift at the end of a branch”.

Introduced to North America fairly recently, it has been the subject of intrigue at The University of Saskatchewan where the world’s most diverse collection of Russian cultivars and Japanese seedlings are matched with plants and soils from across Canada. The goal at the University of Saskatchewan Fruit Program is “to combine the best traits from Haskap and from different regions to adapt this crop for mechanical harvesting.” 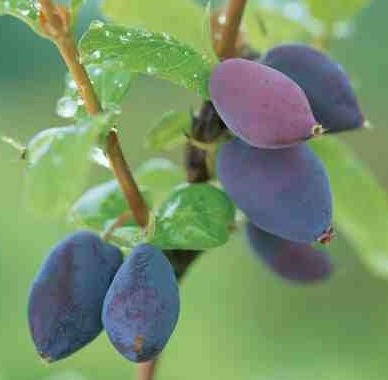 Lunenburg, Nova Scotia, traditionally known as the Balsam Fir Christmas Tree Capital of the World, is now also poised to be the world’s Haskap berry capital. Why is the soil around Lunenburg so special? The whole trick is getting the right soil biology to match the crop. If the soil structure, mineral content, and biology is matched to a plant, the crop will grow happily and healthily. In Lunenberg County the organic soil content happens to be just right.

The flesh of the fruit is purple, unlike a blueberry whose inside is white; and can be tart like a Saskatoon berry but, we are told, it is much easier to sweeten a berry than to make it more tart. It has a fused ovary and two layers of skin, and therefore contains more anti-oxidants, anthocyanins, polyphenols and bioflavanoids, vitamin C and A, along with high fibre and potassium.

In Russia, it has been used to make honeyberry vodka. In Nova Scotia, from Tangled Garden in Wolfville to IronWorks Distillery in Lunenburg, artisans are discovering and experimenting with this potent berry. I’ve sampled vibrant jams, liqueurs, syrups, wine and, at The Wooden Monkey in Halifax, bright citric purple-red Haskap ice cream and smoothies.