An annual visit to Stratford is booked on the agendas of thousands of local and international culture connoisseurs. They come, attracted to its most renowned event, the Stratford Festival with the added value of the Stratford Forum. In 1953, founder Tom Patterson fulfilled his dream of transforming his hometown into a Shakespearean theatre Mecca. Fast forward to today. The town now generates $133 million in economic activity each year.

There is so much fun going on in Stratford, so much romance, so much incredible dining, that to disregard what the town has to offer besides theatre would be unfortunate indeed. I spent a long weekend here this summer, and the many activities I enjoyed will surprise you.

For a mere $29.00 with the purchase of a theatre ticket, I bought a return ticket and took the Stratford Direct Bus from the Intercontinental Center Hotel, in downtown Toronto. In a very comfortable hour and a half I had arrived in time to check into a charming two level suite at the Bentley’s Inn, and head out to one of my favorite restaurants for lunch. The Prune and Bar 151 is where the idea of gastronomy in Stratford was born, and it continues to serve sophisticated and inspired cuisine. The menu changes with the seasons, but pride of place is always at the forefront. After a refreshing cocktail, we step out to a table on the terrace, surrounded by flowers and foliage, birds and butterflies. 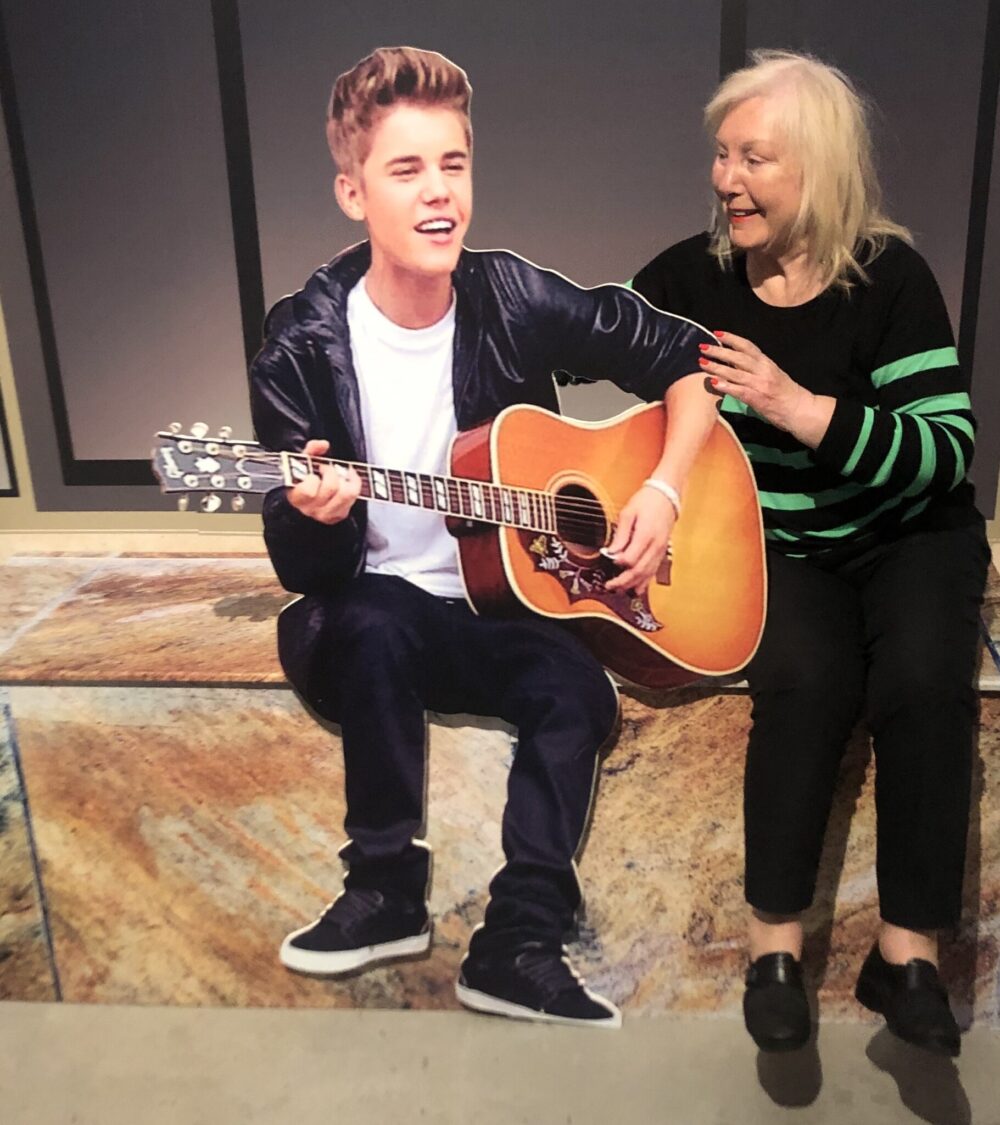 An afternoon of gallery hopping for the rest of the day is on my agenda. A walk along the Avon River is de rigeur, and it is fascinating to sit on a river-side bench and watch the swans, ducks and ducklings glide past. It’s a short walk to Gallery Stratford, located in the city’s historic former pump house. It is surrounded by picturesque parkland with outdoor sculptures through a network of pathways. It’s mandate is to present changing exhibitions of contemporary visual art with a focus on regional and Canadian art. The Gallery engages the public, creates dialogue and offers unique opportunities for education, exploration and interactive learning.

At the Stratford Perth Museum, I enjoy spending time perusing the artifacts of Stratford’s favorite son, Justin Bieber, and taking a photo with a life-size cut out of the pop star. OFF the wall, theater set artists have created a train engine, a focal point of Stratford’s real history as well as a Stratford Festival exhibit, “such stuff as dreams are made.”

Just until August 25th, the sounds of music fill the air. Concerts of Stratford Summer Music Festival are held in many venues, indoor and outdoor. MusicBarge on the Avon River is a favorite, as is Greenwood Court, Factory 163, The Prune and numerous other venues where like minded people just enjoy the musical sounds of summer. 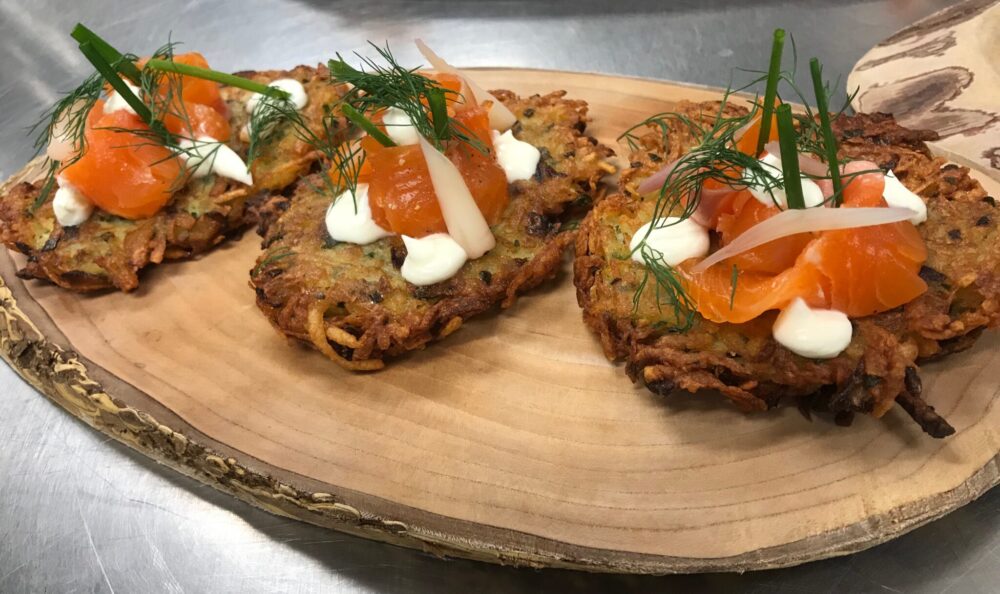 Over the past few decades, gastronomy has become a focal point of Stratford’s sociability, and has gained it the well deserved reputation of a culinary destination. Could it be in part because of all the farms in the region, or the weekend market where locals and others buy their fresh, beautiful vegetables, cheeses and meats? A natural progression of this phenomenon is the ever increasing reputation of the Stratford Chefs School. Always trend-savvy, their Cooking with Cannabis classes are sold out in advance. We are happy to have an Open Kitchen Cooking Class, a traditional hands on cooking/dining experience of preparing our own brunch with a group of eight colleagues: asparagus omelettes, potato pancakes with smoked salmon and crème fraiche, all made from scratch. Frankly, we are proud of ourselves and amazed at the delectability of it all.

A Stratford Chefs School alumnus, Chef Tim Otsuki, now struts his stuff at his own restaurant, The Common, and delights diners with his comfort food of the world menu, with dishes learned from a culinary career that ranges from Hong Kong, the Caribbean and Toronto. In one evening’s dinner, we have an international adventure in gastronomy.

I have been looking forward to a hike along the Chocolate Trail, and we can use our purchased vouchers at six of the 26 stops on the Trail. First stop, Rheo Thompson Candies, who are this year celebrating fifty years in business. And since they opened, three generations of my family have had the absolute thrill of indulging in Pecan Patties, Nutty Pop, and a myriad of other chocolate confections. Our favorite remains the world renowned Mint Smoothies, and trust me, nothing brings joy like a luscious mint smoothie melting in your mouth. A visit to the inner sanctum where it all takes place, from scratch, is an eye opener, and sets us up for a tasting. Chocolate Barr’s Candies has taken truffle making up a notch with flavours of honey and black pepper, lavender, cherry liqueur and hazelnut. Sparkling like jewels in a glass counter, it’s enough to make a chocoholic weep with anticipation. Revel, gives us a fitting last act: a Mocha combining their directly traded coffee with fair trade cocoa and steamed milk.

After all this chocolate, what could be finer than a sampling of Stratford’s Liquid Assets including beer, tea and spirits. At a tasting of locally distilled spirits by Junction 56 Distillery  we’re given a fascinating explanation of how the stills work. They make it seem simple as though anyone could do it—but that’s not the case. The proof is in the pudding, they say. Vodka, Gin, Moonshine, even Mint Smoothie liqueur, as well as other spirits are quite comparable to big name brands. Now, they have released their second batch of barrel-aged whiskey to rave reviews. This is a good place to stock up on gifts. 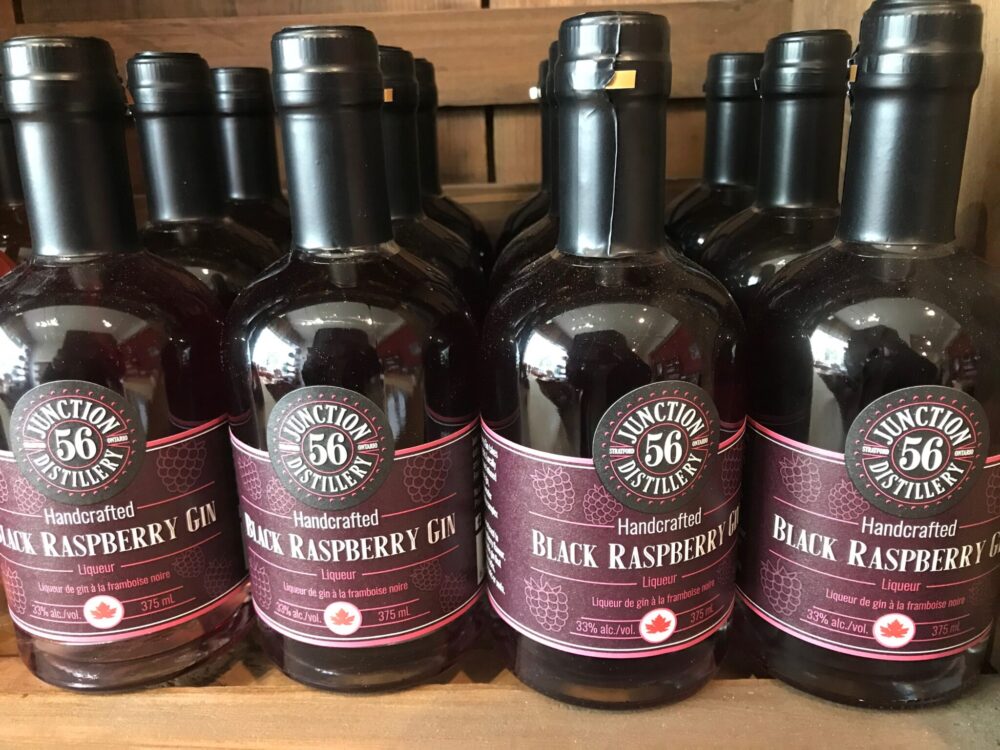 A hike before dinner is in order. Not too far from the bustling main street, there are the most beautiful romantic walkways, wooden bridges with initials carved on the rails and streams. We stroll through unspoiled woods and flowers, and climb a craggy waterfall. I emerge totally refreshed from this nature walk, ready to spend an evening at dinner and the theatre.

At the Mercer Kitchen and Beer Hall, the menu is large, and as a group, we can order dishes from every section and share, family style. Servers know the kitchen and just keep the dishes coming. Everything from Coconut Curry Soup to Temaki Sushi Handrolls with smoked salmon, to steamed pork dumplings, and grilled salmon to fried chicken. A feast for all the senses. At the end, a surprise selection of luscious desserts.

At 7:30pm, Mercer Kitchen and many other restaurants empty out, as the pre-theatre crowds head for an 8:00 curtain time. Billy Elliot, the Musical at the Festival Theatre, is an inspirational story, with breathtaking dance numbers and music by Elton John. After an exhilarating few hours, at 11:00 p.m. it’s time to wend our way home. Our chariot awaits in the form of the Stratford Direct Bus. In my deeply comfortable seat I, “sleep, perchance to dream.”

Climate Change and Seafood: What are the Impacts?