I’m at a restaurant. Around the table no one speaks. Guests are tilted toward their smart phones diligently tweeting variations of, “I’m here.” Next to me a food photographer positions the entrée for his shot. “Can you tell me what this is?” he asks. My phone is pinging. I’ve been hyperlinked. Do I respond with something #clever? Re-tweeting a message is like re-steeping a teabag; there is a degeneration of value. What is actually being communicated? Really important information? To whom? “Information is thought to create communication,” wrote French sociologist Jean Baudrillard, but, “where we think that information produces meaning, the opposite occurs.” We intellectually atrophy by reducing de-contextualized thought bubbles into 140 characters or less. It’s reminiscent of Marshall McLuhan’s Guttenberg Galaxy, in which successive mass media inventions affect our social organization, and re-invent how we interact with each other or, in this case, the anti-social impact of social media on how we dine.

We possess so many different means to communicate today and each generation clings to its own preferred mode. This changes the nature of conversation and human interaction. We share status updates about the minutia and the mundane, and there is cognitive dissonance in which cell phone use at the dinner table has become acceptable. There was a time when that was considered poor etiquette, but now the social training of previous generations is being replaced by the syntax of emoticons and vocabulary evolving toward newspeak. Statistics show that we are now dining out more than in and, for many, that experience has become a contemporary video game narrative where our gadgetry is set beside our utensils, and dishes appear with immediacy as though entertainment ordered from Netflix. That special night out should not be so casual. It’s like taking a photo to capture a moment that we can’t appreciate, because we’re too busy taking a photo of it. We’re missing something. 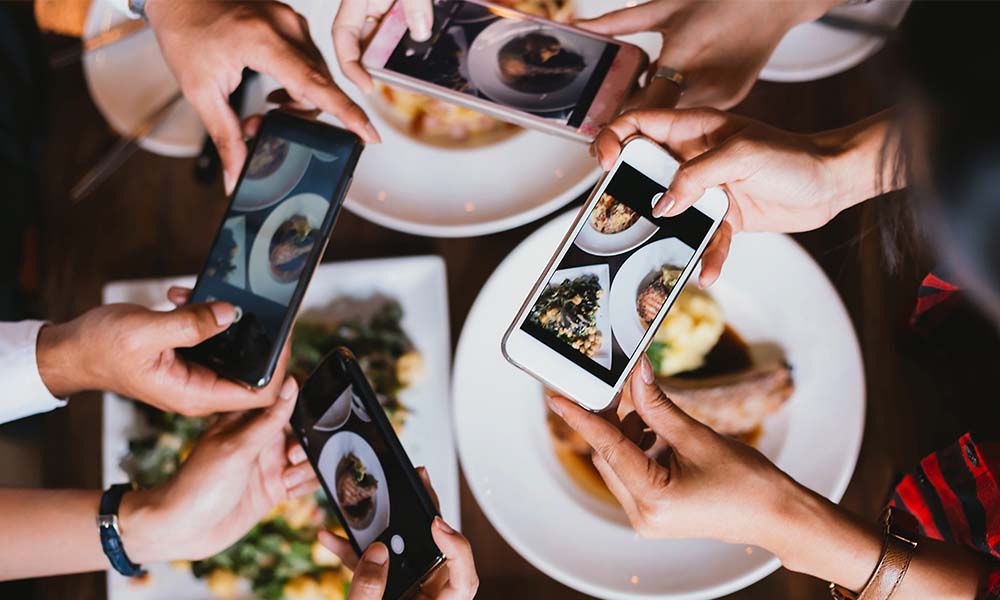 In the late ’90s I lived in Kyoto. My Dad was home in Toronto. I asked him to send me an email. He dictated while his secretary typed the email, which he then had her print off so he could sign it, put it in an envelope and mail to me. I laugh now, but I understand it too. We’ve cultivated this cyber garden of tweets, snapchats and instagrams that have grown like weeds, and we tend to them at the expense of direct engagement. Who is the beneficiary?

I’m not debating the value of social media, but the phenomenon of social media in dining has become to journalism like vitamin supplements to a proper diet. It can be information-rich and often laden with anonymous and questionable qualification. We’ve tossed the white tablecloth to give the illusion of accessibility and now everyone with an opinion is an expert. If you tweet about a meal, is there any causal connection between that posting and one other person dining there? Perhaps, if you’re a Kardashian. Otherwise I truly doubt it—because there is no context. More importantly, there is no conversation. As McLuhan proclaimed, “the medium is the message.” We have access to incredible tools for far reaching communication, but we should never lose the language of intimacy, or our ability to articulate, with authenticity, all that is right in front of us. Bon Appetit.