“Stop! We enforce the law without fear or favour.” That’s what the sign said as the truck on which I’d hitched a ride wound further up into the foggy mountains. Right then I had a sinking feeling, like that moment before the roller coaster car makes its last inches to the summit, and you look back knowing it’s too late to get out.

I’d been warned. All the guidebooks said to exercise caution and avoid this area. But, I was young and I was curious.

I couldn’t fathom a “tribal war.” The pictures I’d seen of these heavily ornamented people looked as though they were from another time, but they weren’t. In this part of the Philippines, Northern Luzon, there lived head hunters—and not the kind that find you a job. Apparently, some boys from one tribe had decapitated a boy from another. Passage through the mountains at this time was not advised, because of something called “guilt by association.” My guide spoke the language of both factions. We soon reached Kalinga. 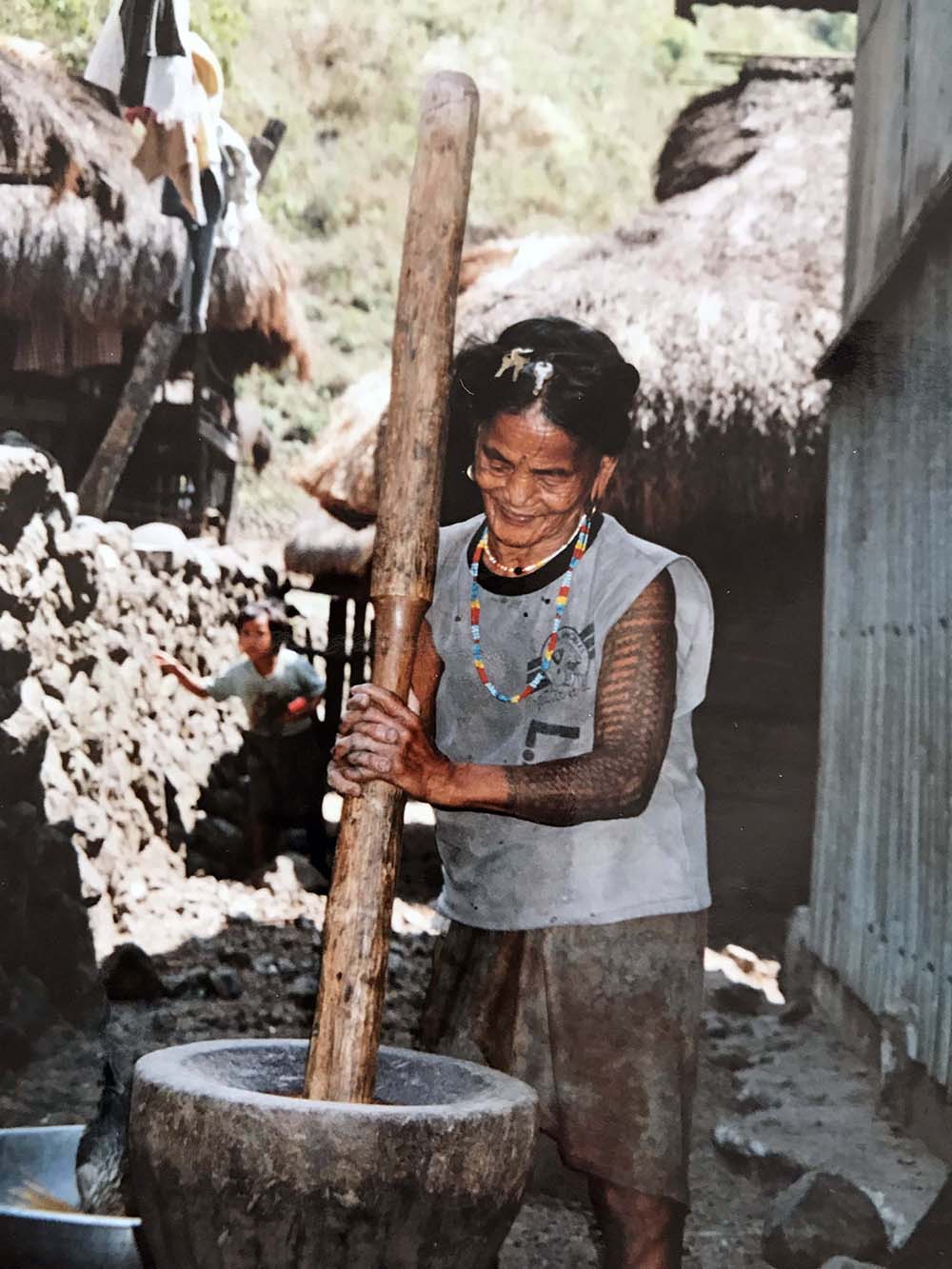 It was quiet. The afternoon breeze. The creaking sound of rope pulling as I crossed the footbridge. Outside thatched homes women slapped wet clothes in their wash buckets. One elderly woman pounded rice. Her arms were covered in sleeves of tattoos and her ears drooped from the weight of brass rings. She laughed as I attempted to dehull the rice in the mortar, and went about her business. There was no conversation, just quiet observation of this seemingly peaceful agricultural community in the mountains.

We continued onward. In Sagada, we hiked past mummified bodies and hanging coffins that lined the walls of caves. While everything seemed disturbing to the uninformed, it was only the quiet and the anticipation that made me anxious.

Along the bumpy mountain road we saw the most beautiful rice terraces that appeared like reflecting pools around the contours of the peaks that cascaded down into the valley. Perfectly carved. Perfectly still.

Arriving in Bocos Village at the tail end of a funeral, I was told that the coffin being paraded through the street had been tilted so that blood could pour out onto the mourners. True or not, I was excited by the danger, and frustrated by my ignorance. Restless, I walked through the town past a sign reading, “Only dogs may urinate here,” and up to a higher vista.

Night fell quickly. I remembered there had been a curfew in place, so I quickened my pace. As I began walking back down the steep narrow path toward the village, I could see the whites of her eyes spying me. Unnerved, I stopped.

“What are you doing?” A stern voice called. “You should not be out alone at night. Come inside.” Tepidly, I walked closer. We climbed the ladder into her thatched wooden hut where she lit a lamp. I could see she was young. “Whose house is this?” I asked. She stared at me without any intention to speak. I was increasingly uneasy and trying not to show it. “Are your parents around?” “Where is everybody?” I asked. She looked at me a few moments longer. “This house belongs to my grandfather.” She replied. “Would you like to see him?” A strange thing to say, and I felt the weight of my foolishness. “Sure.” I responded lightheartedly. “He’s outside.” She looked away, rose up and whisked herself out the door. I followed.

My heart pounded in the darkness as I fumbled back down the ladder. Standing beneath the entrance to her hut, she pointed, “Here he is.” I fidgeted with my flashlight, followed her outstretched finger, and shone it on a clean skull and a neat stack of bones. I spun around. She was gone.

Wine in Winnipeg at The Forks