Could there be a more fun meal than brunch? Sleep in. Freshen up. Skip the light fare and indulge in the most rejuvenating and social meal of the day. And yet, the typical brunch menu is getting a little tired and predictable. Enter Chotto Matte. It means “wait a little” in Japanese, and yet in this context a more apt translation would be: a pause from the mundane for gastronomic excitement.

From the moment we enter the restaurant, we know we’ve escaped into some tropically-inspired embassy in which no view nor menu item is like anywhere else in Toronto. Seated at a comfy banquette, we’re immediately set up with cocktails. It’s the best way to start a brunch. Everything is better after a really delicious cocktail. 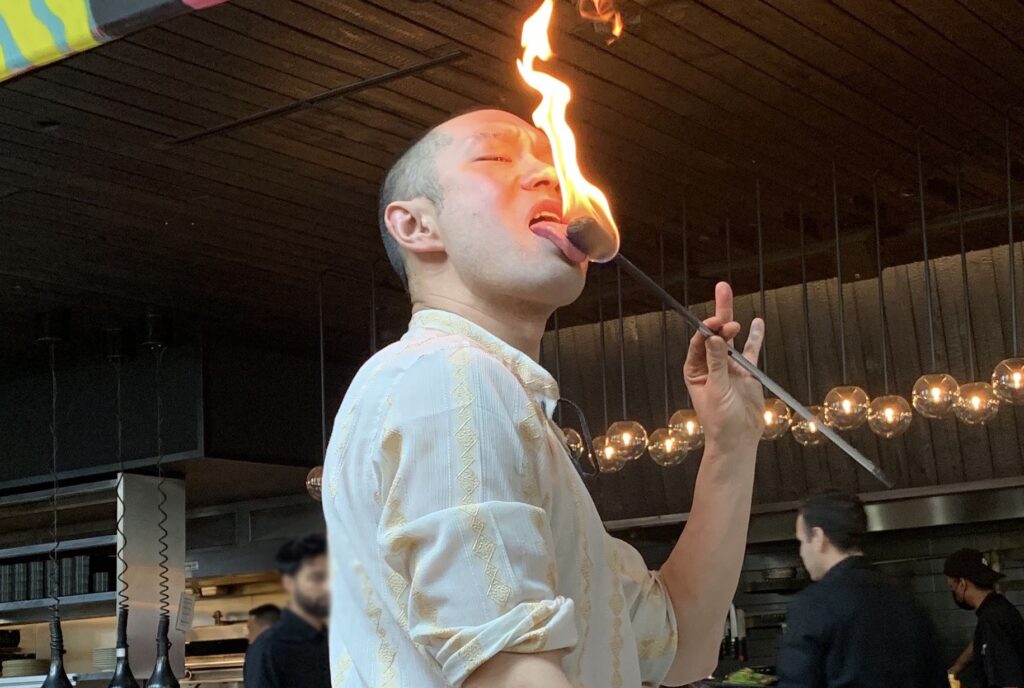 A note of authenticity: the Pisco Sour here is made with Peruvian Pisco. That should be obvious, but often it’s not the case. Often, we find the pisco behind the bar is from Chile. That’s not the same. Peruvian pisco is made from Peruvian grapes distilled purely and directly to proof without any added water or sugar. Here, they use a quebranta, which is the most common Peruvian grape from which to make pisco. That’s good.

Alas, I am seduced by the colourful array of playful cocktail confections and the “Bottomless Mimosas” option that allows me to try as many as I’d like! The Cheetah-Rita is a mellifluous blend of yuzu, tequila, Cointreau and agave, decorated with a shiso leaf and dried-crisp blood orange. 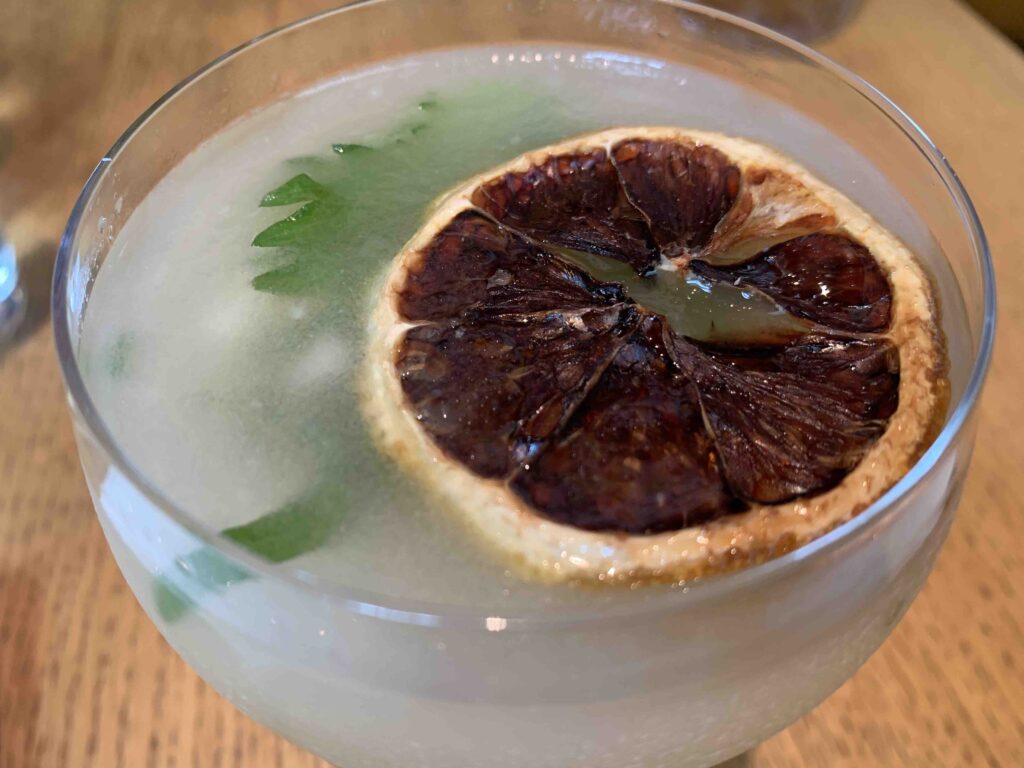 Our “Jungle Brunch” begins as sharing plates arrive in short order. Pop-in-your-mouth barbecued edamame are salted, blistered and distinctly smoky. Ceviche, refreshing and vibrant, is chock full of sweet potato and lollipop-sized Peruvian corn, and stars a silky branzino drizzled with chive oil. It’s the quintessential Northern Peruvian dish and an enlivening palate-opener. The Bao Asado De Tira, fluffy buns stuffed to the brim with slow cooked beef, braised in a teriyaki jus and bejeweled with pomegranate seeds, is a scrumptious harmony of sweet and savoury notes that sing.

As friendly and attentive as the staff are, we are fixated on a fire-breather who swallows fire and reignites his torches with his tongue! And then, there’s a man with a snow-white cockatoo who rests his ornithological friend on my shoulder as it says “Hello” to me. Throughout our culinary journey there are also bendy women in snake outfits performing their acrobatics for all to admire. It’s quite a show and we’ve got ring-side seats. 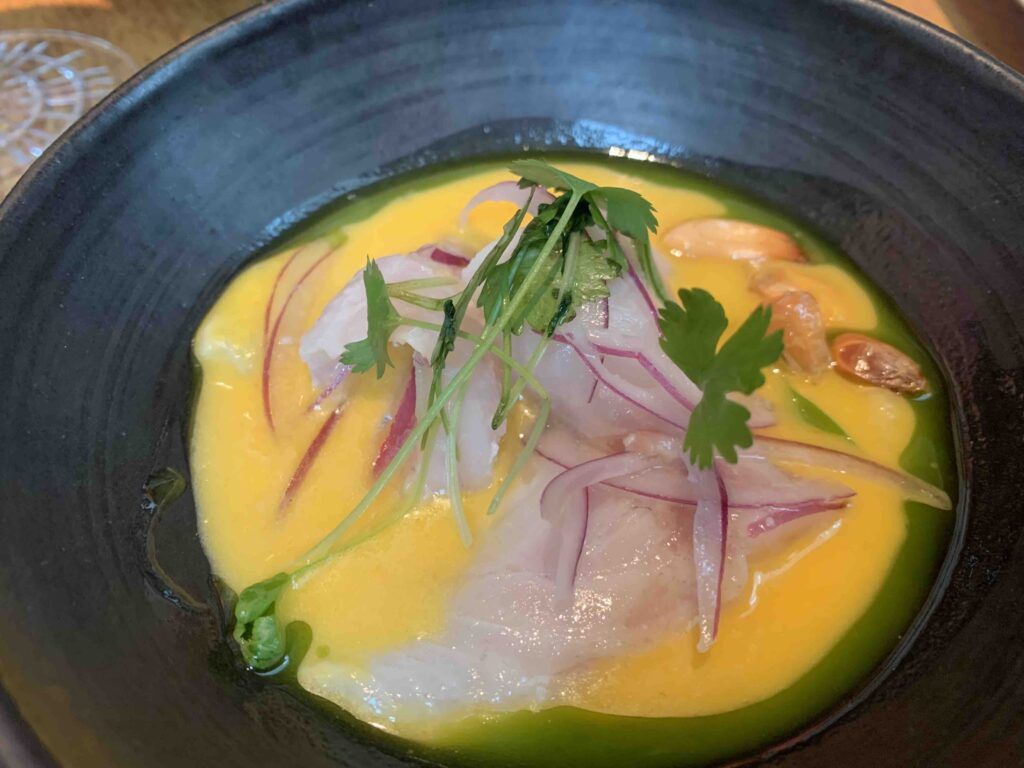 The show stopper has to be the Sushi Donut. Tuna, salmon and soy-marinated roe bedazzle a sushi roll of asparagus and pickled daikon. The kitchen gives an added kick with siracha mayo and rocoto pepper. Typical of Nikkei cuisine, the inspiration is Japanese, but the flare and fun come from the Peruvian chef’s unlimited palette of colours and ingredients.

Thick and sweet, this soy sauce is distinct. I am told it is made in-house with bonito flakes and that it is gluten free. Its rich umami quality adds a welcome splash to each successive dish, from the sato maki to the chicken kara age.

The purpose of “aburi” is to elicit oils from the fish to elevate its flavour profile. But we just like watching things get torched. Satomaki is a divine mouthful of textures and nuances from the cool branzino and asparagus inside the roll to the aburi salmon and tartare of shitaki and eggplant with sweet miso on top. Nothing here is one-note as we discover with each new bite. 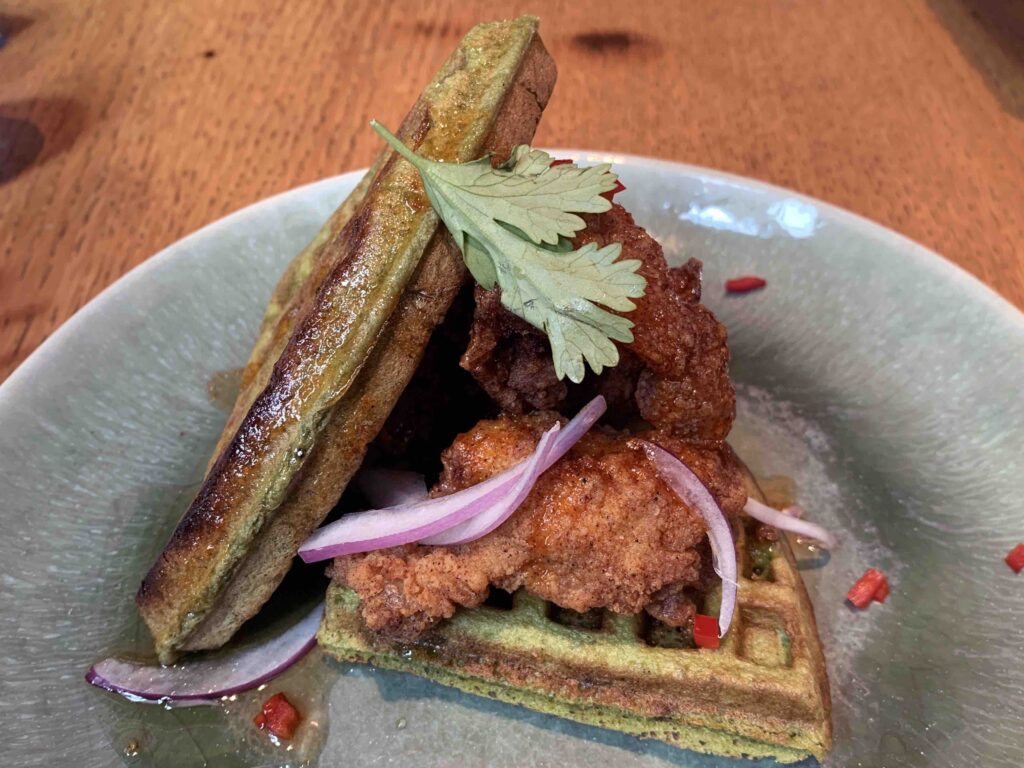 Chicken kara age is a staple at any Japanese izakaya, but as with every dish at Chotto Matte, this has wow factor from its Instagrammable presentation to its round house kick to my palate. Lightly fried chicken is couched in warm and fluffy macha waffles and drizzled with a picante maple salsa. Ay, caramba!

Now, could we get any more decadent than aburi-style Australian wagyu sushi topped with foie gras? I think not. Strips of A5 sirloin are gently seared and require from us a moment, as we sink into our seats in appreciation of each luxurious mouthful with silent satisfied nods of approval.

Ever conscientious of dietary restrictions, this kitchen also offers a whole vegetarian menu, as well as several items listed as vegan or gluten free. From lychee ceviche, to a sweet potato curry with goji berries and pecans, to stir-fried eggplant lacquered in a savoury apricot miso and textured with puffed soba and sesame seeds, flavours abound!

Succulent smoky lamb chops are tenderly marinated and lavished in an anticucho-inspired sauce of miso, red chilli and Peruvian corn. Anticuchos are an African influence and generally a skewered street food in Peru, but that essence is perfectly translated in this dish as it is charred and caramelized from the barbecue and richly flavoured and spiced to lip-smacking goodness. 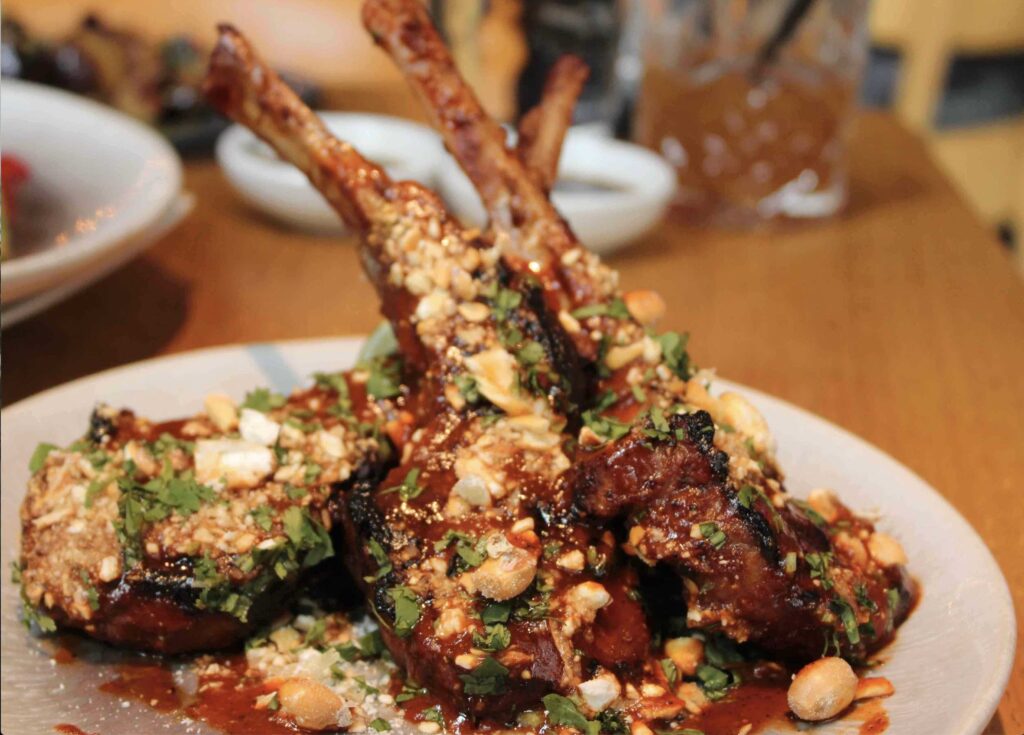 Not to be outdone, desserts are as inspired and diverse. From the selection on the menu, we are served a platter including one generous dollop each of mango cheesecake mousse and matcha cheesecake mouse, accented by a blueberry compote, crowned with a candied sesame snap, and accompanied by one scoop of in-house made vanilla ice cream and a vegan mochi mango ice cream reminiscent of an orange Creamsicle.

Whatever we’ve planned for the rest of the day can’t possibly top the gastronomic heights of this extraordinary brunch experience, but we’ve been recharged, and that’s what a good brunch is supposed to do.