While Tel Aviv looked elsewhere and was involved in weightier matters, a quiet revolution was taking place. For the past decade, it had bubbled and simmered on the back burner of café society, until it suddenly boiled over and became the cause célèbre on everyone’s lips: The natural fusion of culinary secrets from the kitchens of people from 72 countries as diverse as Yemen, Poland, Denmark, The United States of America, Ethiopia, Germany, Persia and more. Scan a map of the world, and there it is, a passionate interpolation of herbs and spices with local farm produce. Every chef is skilled in the ways to properly grill eggplant, peppers and fish, and how to use garlic and spices to enhance this complex cuisine. Tel Aviv Cuisine.

The culinary mosaic has evolved into the melting pot. The gastronomy hot line led me straight to the restaurants helmed by executive Chef Jonathan Roshfeld. At his Herbert Samuel, a smart looking crowd in aggressively smart/casual garb has found its spiritual home. Roshfeld’s Sicilian Fish Soup is a happy collaboration in which tarragon and saffron play tag with white Drum fish, mussels, shrimp and rice in rich tomato broth. The piece de resistance, however, is lamb shoulder, coaxed to tenderness by slow cooking and an amalgam of sage, rosemary and thyme, beetroot for earthiness and red wine for depth of flavour. It is easy to forget that we are in what was once a dusty Middle East city. In the mix of this sophisticated Mediterranean restaurant, I hear snatches of many languages including English, French and Spanish. The message is the same: great food!

I’ve been looking forward to dining at another of Roshfeld’s restaurants, Yavne Montefiore. The scene is gregarious and congenial with a cuisine I call classic Tel Aviv moderne. My expectations, that chicken soup in this “home office” will be exceptional, is confirmed. A big bowlful of peppery golden broth surrounding a chicken meatball the size of my fist is aswim with chickpeas. It inspires at first sight, and I could eat the whole thing, but the next presentation makes me pause. It’s my first introduction to the Persian Skull. The kitchen wraps a huge chunk of cauliflower with well-seasoned ground veal, oven-roasts it, and serves it scattered with coriander and pomegranate seeds. Each taste brings an exhilarating flavour to the fore – lemon, cinnamon, and other mysterious blends. Whole grilled fish—the classic Mediterranean dish, is given a new identity here, with the chef’s own coalescence of thyme, sage, oregano and exotic herbs unknown to me. Roshfeld is a fearless cook who delights in the element of surprise, confidently partnering ingredients and spices that others would not dream of, grinding dried legumes into flour and creating his own blends. 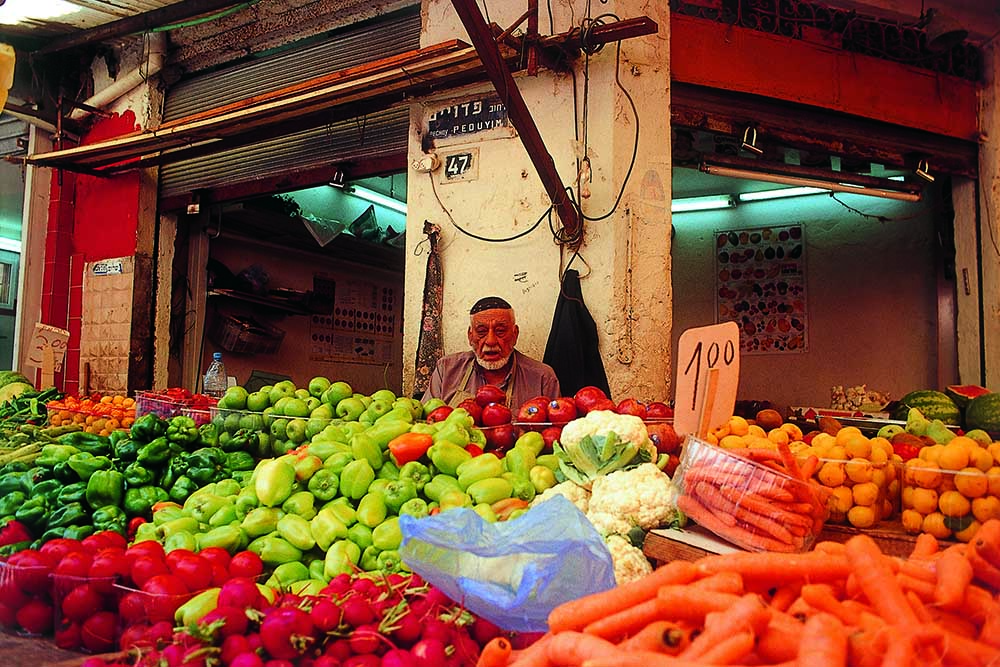 Tel Aviv rocks around the clock, choc-a-block with enclaves of cafés, restaurants, falafel and shawarma bars—and all manner of socializing around food and wine. And Roshfeld’s Tapas Bar is more than just a neighbourhood hangout. Of course, it’s noisy—how else would we know this is the place to be? Sit at the bar as we did and enjoy small sharing plates with flavours that sing and dance in the mouth. Every dish has snap, crackle and pop. Here, less is not more—more is more. The sociability in the room is overwhelming. The bartender is the custodian of our night. We revel in the abundance of wine and food, laughter, and music by an amazing DJ who is clearly having as much fun as everyone else. And yet, conviviality does not camouflage the precision and skill in the kitchen, which Roshfeld acquired in Michelin starred restaurants in France. His palate is refined and clear; effectively creating a personal style that has become his trademark.

An American friend asks the classic American question: “That’s all very nice, but can I get a good steak in Tel Aviv?” We meet at the Whitehall Steakhouse, one of the oldest in the city (1985). Unpretentious and friendly with its shiny wood tables and chairs, it smells of delicious grilled meats and has us salivating even before we’ve opened the menu. The steak arrives, as it should, naked on the plate and, with primal devotion, I slice into the crusty caramelized rib eye. This is not the beef of high-ranked U.S. or Canadian ranches, it is a re-discovery of the flavour and texture of steak, and it is from Guatemala. Beef from South America will probably never make its way to our tables at home, but I have had a memorable taste.

Even on a rainy day, to walk through the cacophony of Carmel Market is a trip to another world of fruits and vegetables, spices, meats, fish and clothing and obscure knickknacks. Everything is fresh and beautiful. How wonderful to eat an orange that has not ripened on a truck—or fresh dates and figs or an array of olives from the oldest trees known to man. I pause at the Yemenite quarter, have a bowl of soup and savour its mysterious and vivacious flavours. Cross Ben Yehuda, and I am on Sheinkin Street. Once a decidedly down-market residential street, it has been discovered by the bohemian and the avant-garde, and is now dotted with cafés, restaurants, bars and artisanal craft boutiques. Stroll along and perch anywhere you can find an empty table. Neve-Tzedek, the first neighbourhood created in 1887, is home to shops of artisanal craftspeople. The bars and restaurants are an easy blend of bohemian chic and welcoming attitudes.

Mesmerized by the crashing waves and the sea, I stroll along the paved bicycle and walking path and find I’ve walked all the way to Jaffa. According to Biblical mythology, this is where the whale coughed up Jonah. To underscore, a huge sculpture of a whale stands in a prime courtyard. This ancient sister city to Tel Aviv has undergone a gentrification of vast proportions—not just a facelift, but also an entire body makeover. Still retaining its unique personality, it has become an artist’s colony, a place to spend an entire day shopping at the flea market, eating in cafés, enjoying street food, coffee and snacks from the countless bakeries.

It is fitting then that the Grande dame of Tel Aviv Restaurants, Ofra Ganor, along with her husband, Avi, have chosen to pen their new restaurant Yona (Jonah in Hebrew) right here at the old port, overlooking the sea and a flotilla of fishing boats. It was built in a British hangar, which was later used as a warehouse for the famous Jaffa Oranges. Head Chef Ronen Skinezes brings to the table fresh market cuisine from land and sea. An enhanced natural décor displays gorgeous vegetables on large wooden barrels and jars of sparkling preserves and pickled vegetables stand on hewn wooden tables. An abundance of breads, cheeses and fruits entice us to throw discipline to the wind. We want to taste it all. Sardines to luxurious seafood, wood smoked meats, plank baked fish—the scene is nourishing for the soul.

A favourite place to break bread is Lehamim Bakery. Baker-owner and cookbook author Uri Sheft’s heritage is Danish and his breads and pastries amaze in both heartiness and delicacy. The prep areas, baking rooms and pastry kitchens all culminate in a place of such delicious fare, it invites us to return on a daily basis. Plans are underway to open in New York, and I will wager he will be an overnight success. 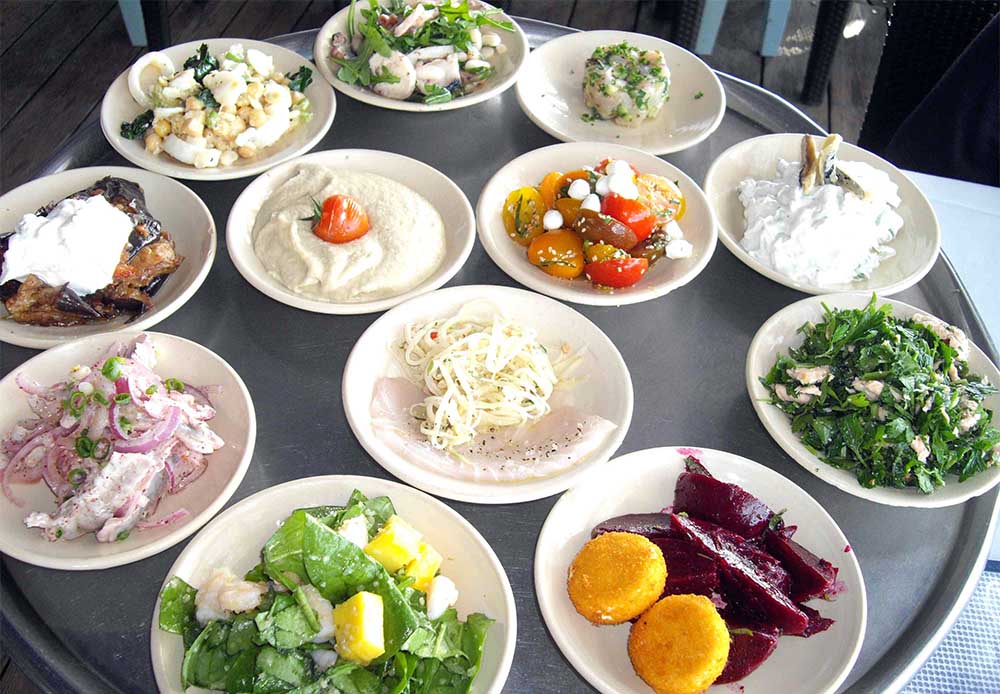 My last lunch in the city, where every meal is a production, epitomizes the best of Tel Aviv. At Manta Ray, also owned and operated by the inimitable Ofra (Yona Chef Skinezes also cooks here), we are at a window table, watching the waves crashing to the shore. The beach is of a dozen appetizers—followed by a whole grilled fish, which was swimming in the sea just an hour ago still empty on this winter’s day, but the sun is warm.

For me, an almost crucial aspect for enjoying a dining experience is an intelligent companion with an adventurous palate. Divine intervention provided me with the perfect dining partner: Gideon Ben Ami, a restaurant-savvy, man-about-town. At the bakery, I agree to accompany him on an errand before I return to my hotel. He loads four huge boxes of breads and cakes into the trunk of a taxi and directs the driver to Levinsky Square, about a five-minute drive. Men, women and children are just “hanging out,” an odd sight in a city where everyone moves with a purpose. He explains that these are illegal immigrants from Eritrea who have made their way to Egypt, where Bedouins are paid to take them across the Sinai desert and sneak them into Israel. While there are non-profit organizations who bring them blankets and hot food, Gideon is like a one man Second Harvest.