“Set me alight. We’ll punch a hole right through the night. Everyday the dreamers die. See what’s on the other side.” – U2, The Joshua Tree

It’s another planet. Giant blobs of granite stacked like Tetrus played on a geological time scale; a valley of cholla cacti that look like a displaced coral reef; and Joshua Trees—everywhere—spreading upwards like fractals. Awe-inspiring. This is the undiscovered country of infinite exploration and Zen contemplation; a vast playground for hikers, cyclists and campers. For those with an active spirit, it’s a spiritual land. Climbing over a boulder and through a path cleaved between the rocks, I reach a trailhead. Where does this go? I ask a passerby. “No clue.” He smiles. “That’s the fun part.” As the sun sets over Joshua Tree National Park like ripples of Fruit Roll Ups spread across the sky, I chase it over the mountains toward Palm Springs. 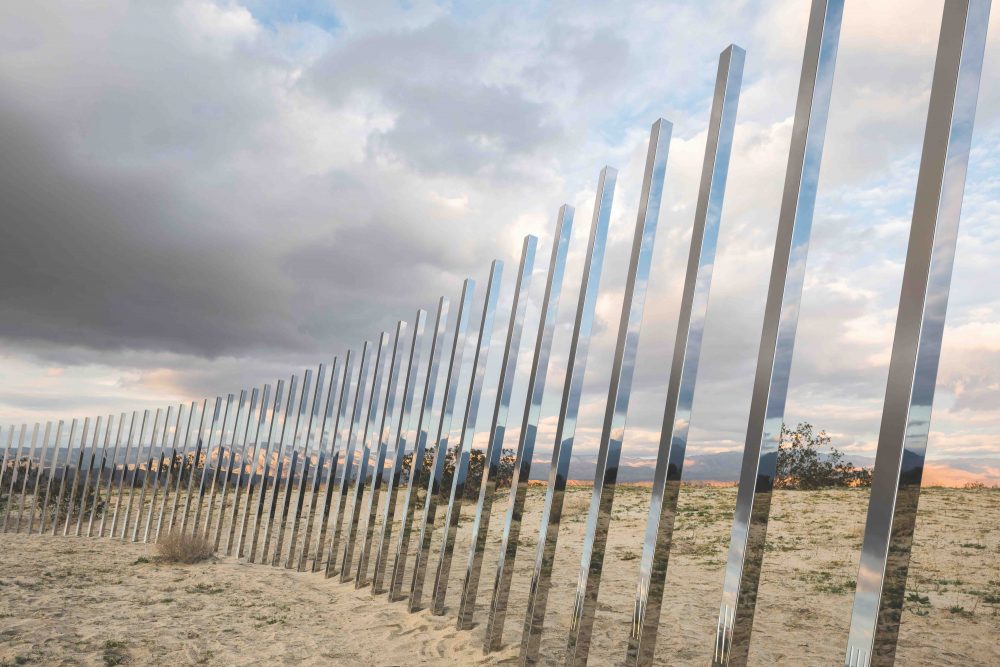 An oasis of arts, palm tree-lined boulevards named after entertainment icons of yesteryear, like Frank Sinatra and Bob Hope, lead to the music festival behemoths of today, Coachella and Desert Trip. Classic mid-century modern architecture maintains a post-war suburban American ambience, but one that is juxtaposed with emerging artists whose art installations of Desert X have turned the valley floor into a free and open-air gallery of the avant-garde. Mirage, by Doug Aitken, represents a “land-art reflection of dreams and aspirations” in the form of a ranch house overlooking the valley. Every square inch of surface is covered in mirror. Driving toward it, I see a blinding light, while at other angles, invisibility. It’s in my sight and then it’s unattainable, and there it is again. According to the artist, “It both absorbs and reflects the landscape around in such ways that the exterior will seemingly disappear just as the interior draws the viewer into a never-ending kaleidoscope of light and reflection.” 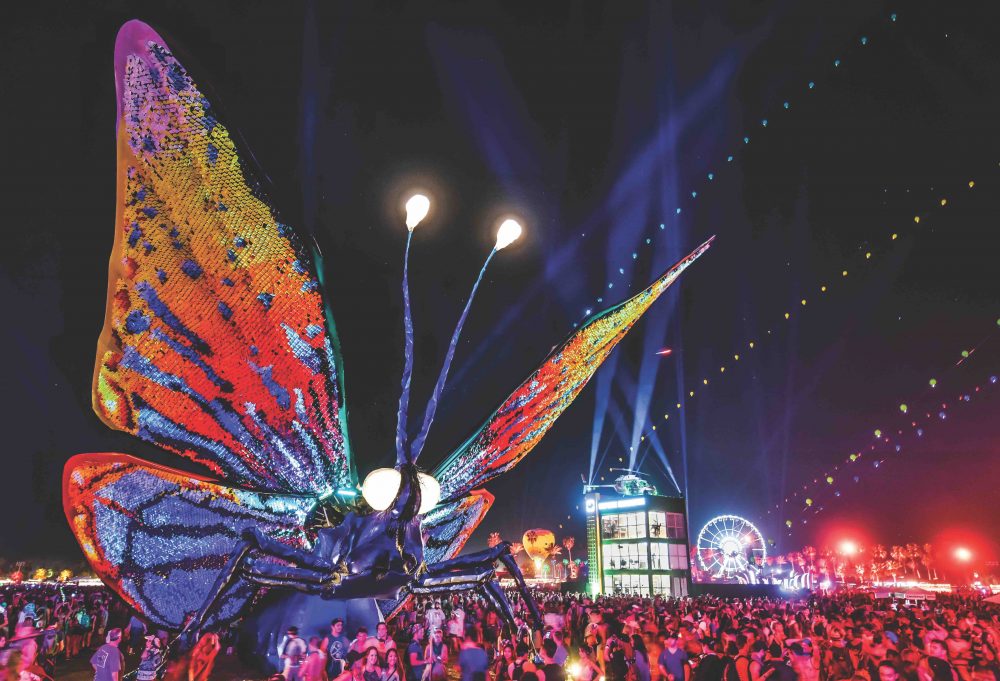 At the newly minted boutique hotel, Arrive, we feel like we’re part of a community. We check in at the bar and receive keys and cocktails. So hip, everything here is text-based. We don’t call a front desk for dining recommendations or dry-cleaning; we send a text to the bar. Poolside is the new hangout. It’s urban and framed by the towering San Jacinto mountain range. The menu at the hotel’s Reservoir restaurant represents flavour-forward So-Cal cuisine with fresh crisp ingredients like the obligatory made-to-order guac, and tacos of charred purple and green cauliflower or tempura shrimp with tamarind sweet chili and micro-cilantro. There’s no better desert dessert than ice cream. At the adjacent artisanal Ice Cream & Shop(pe), I am seduced by luscious scoops of pink ginger ice cream and sweet corn ice cream served in salted pretzel cones.


Palm Springs is the “date capital” of North America. Only here can one find true blondes and brunettes. There are actually between 10 and 15 varieties of dates sold at Shields Date Garden, including rich, soft and plump majouls. Ever wonder about the Romance and Sex Life of a Date but were afraid to ask? Shields has been playing this film on repeat for more than 60 years. I watch it while sipping a sweet and delish’ Date Shake. Meandering through the biblical botanical gardens out back, I suppose I could be forgiven for thinking this is ancient Greece. Statues of apostles and prophets, handmade in British Columbia, are set throughout the garden giving a genuine feel of antiquity. 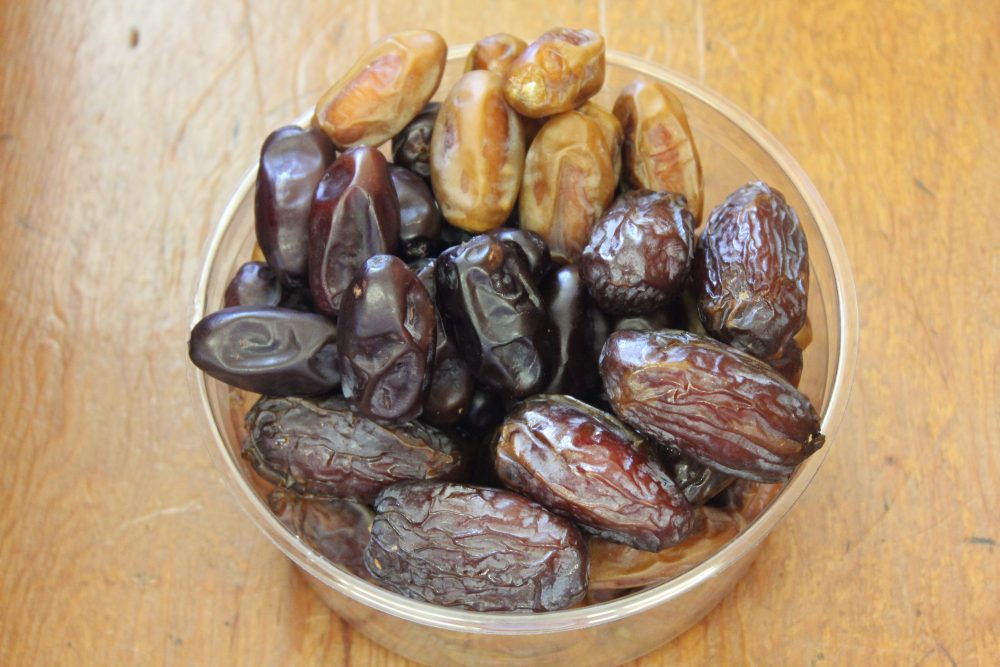 The garden at Sunnylands is considered a healing space in which to meander through drought tolerant native and adapted plant species that offer quiet shade and natural elements for contemplation, yoga and tai chi. There is stillness, like a canvas, in which the mountains appear in the background, while in the foreground, reflecting pools and winding paths transport us to serenity. Long known as the “Camp David of the West,” Presidents from Eisenhower to Obama have used this garden and golf course for diplomatic summits and a Presidential retreat.

There are 130 golf courses in Palm Springs. The allure of warm weather, pristine views and unique terrain attracts golf enthusiasts from Winnipeg to the White House. Now there is an added feature to many courses appealing to a younger demographic: Foot Golf. Already an organized sport in 37 countries around the world, Palm Spring is its mecca in North America. Armed with a refreshing Even Par IPA by local La Quinta Brewing Co., with citric notes of pineapple and passion fruit, I punt an official-sized soccer ball onto the gorgeous Desert Winds golf course. It’s surprisingly fun, but I immediately get the sense that this is like when skiers had to learn to share the slopes with snow boarders. Won’t people get mad? I ask. “Of course.” Replies American FootGolf Founder, Roberto Balestrini, with a laugh. “But we’ve got bigger balls!” 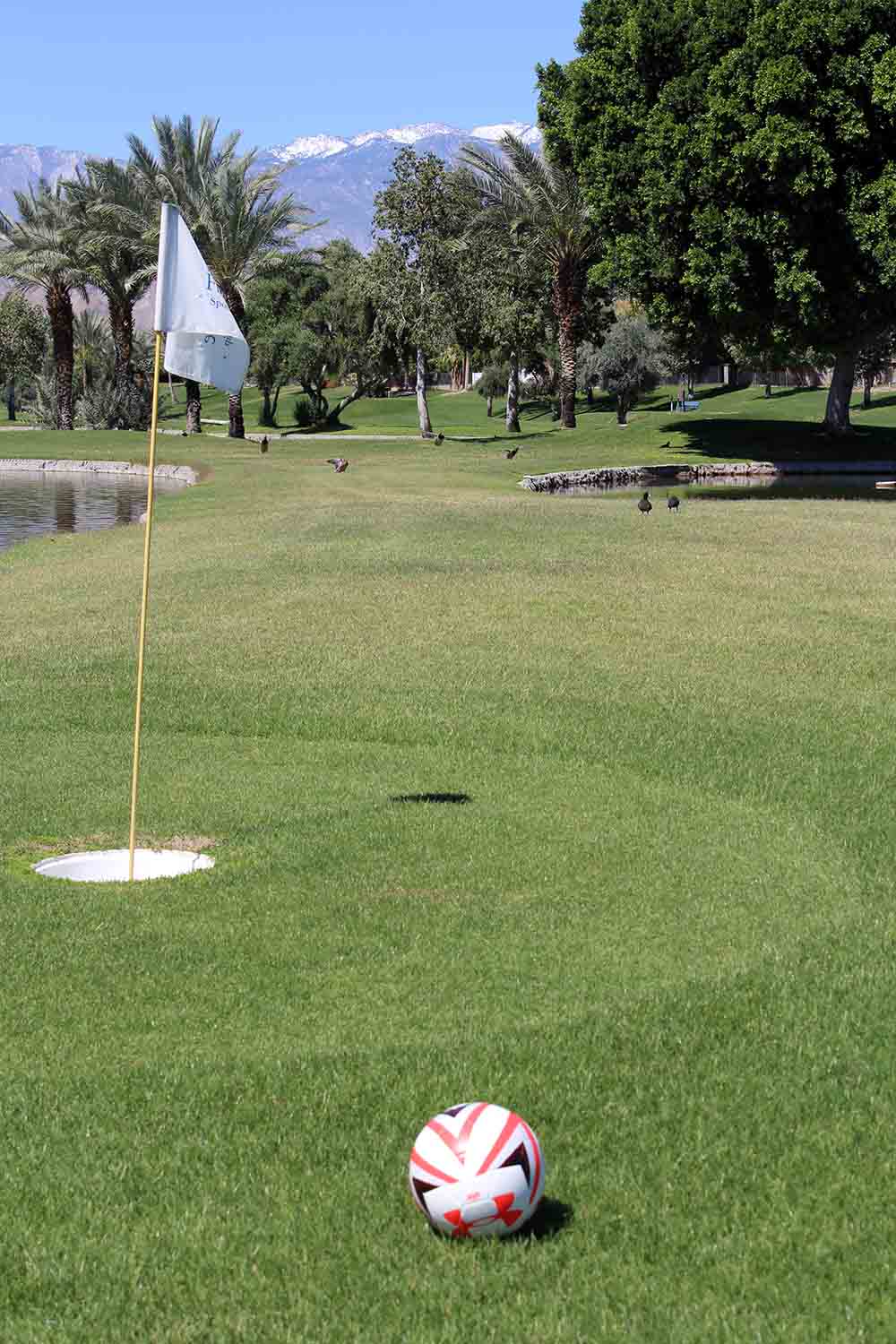 In time for cocktails we head to new local hot spot, Truss and Twine. Desert ingredients inspire the menu, and cocktails are divided into eras like the Golden Age, Prohibition and Dark Ages. I order a Game Changer of gin, lime, cucumber, onion brine and celery bitters. Quenching and versatile, it pairs with a range of bar bites from spot prawn dogs with uni mayo, to habanero and date beef jerky; local goat cheese with bougainvillea dust, honeycomb and cactus confit; along with a range of charcuterie, local olives and oysters.

The Palm Springs of today is so full of youthful energy and possibilities, and a southern California vibe combined with Canadian sensibilities. Canadians are everywhere discovering the music, the arts and the escape. Over drinks at the bar I’m asked, “Why does the Canada Goose migrate to Palm Springs in winter?” I shoot back, “To be closer to Canadians!” We know a good thing when we see it.