January marks the end of one of my favorite seasons of the year. The Truffle season begins in mid September and lingers aromatically until the end of December. During this time, upscale restaurants throughout the world add truffles to their menu, knowing that a certain clientele will be waiting to indulge in the annual truffle fest.

In Los Angeles, while lunching at Wolfgang Puck’s Bistro Garden, I see him table-hopping as usual, schmoozing with guests many of whom are movie and TV stars, all the while carrying a cumbersome cardboard box under his arm. When he strolls over to my table, I ask “What’s in the box?” He begins to open the lid and at once there is the unmistakable perfume of truffle. “Want some?” he asks, and shaves a few aromatic flakes on to my Cobb salad. The single truffle, almost the size of a basketball, would have cost him about the same amount as a very nice car.

In Italy, the truffle scene is a story in itself. A single street lamp illuminates the Piazza Stratuto, near the centre of Asti. At dawn the dealers begin arriving. The headlights of their Mercedes and Alfa Romeos pierce the darkness. Others drive up in humble Fiats. Men huddle together in the damp November chill, making small talk: the weather, their dogs, everything but the matter at hand. They size up the situation – who’s holding, who’s buying and selling. They wait to see who will begin the play. 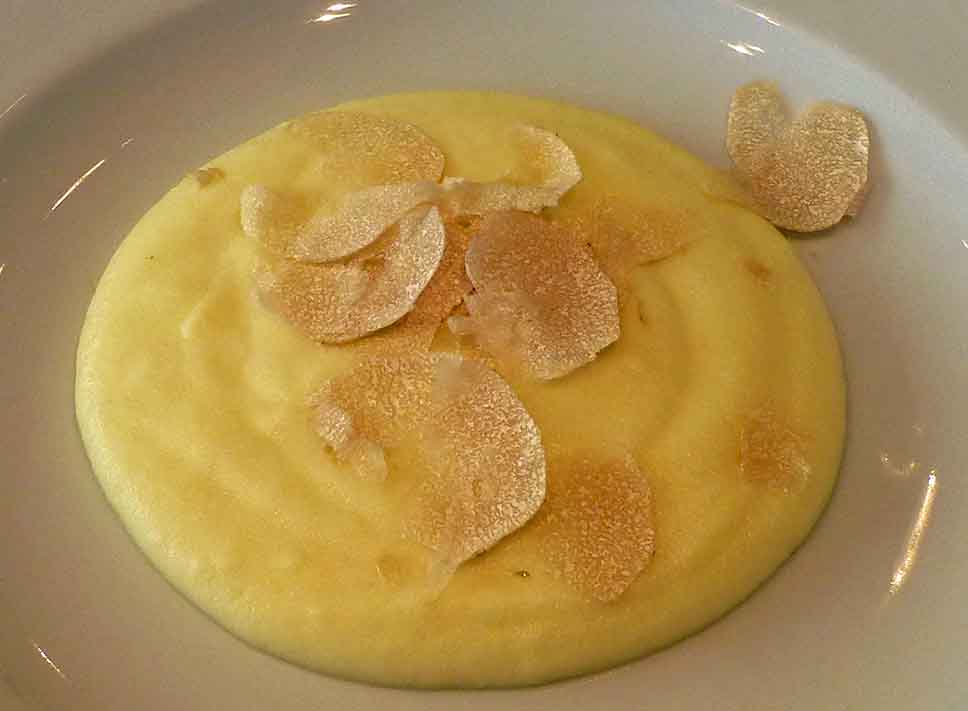 This is the truffle market, a centuries-old tableau, and Alba and Asti – in the North West province of Piedmont – are the truffle capitals of Italy. The truffle hunters, trifulau) collectors and dealers bargain in Piedmontese dialect with shrugs, hand signals and body language. I am the only woman here, and will remain totally ignored – unless I start shooting photos. That would be a faux pas.

Earlier, by moonlight, the trifulau and their trained hounds (the French employ pigs) had been sniffing out ripened truffles in jealously guarded secret places in the woods and rolling hills of the Monferrato area. Clandestine out of necessity, away from the prying eyes of competitors, they find a cache. Ecco la! They gently scratch the ground with a metal sapin and remove the truffles. If the hole is camouflaged carefully, by next year there will be more truffles to harvest – unless another trifulau finds them first.

The white truffle is a fungus with a worldwide following. There’s also a black variety found in the Perigord region of France. Truffles grow under ground, feed off the water and minerals of the soil, and live in symbiosis with the roots of oak, hazelnut or linden trees. They ripen in stages in a four-hour period, between mid-September and late December, and give off three distinct aromas – the first is musky, the second mushroomy, and finally the mature, sweet garlic/vanilla/pepper aroma that is somewhere between food and sex. It is a rare and valuable truffle hound that can sniff out the first or second stage of ripeness. Alas, if a truffle remains undiscovered, it will live for only 12 days. 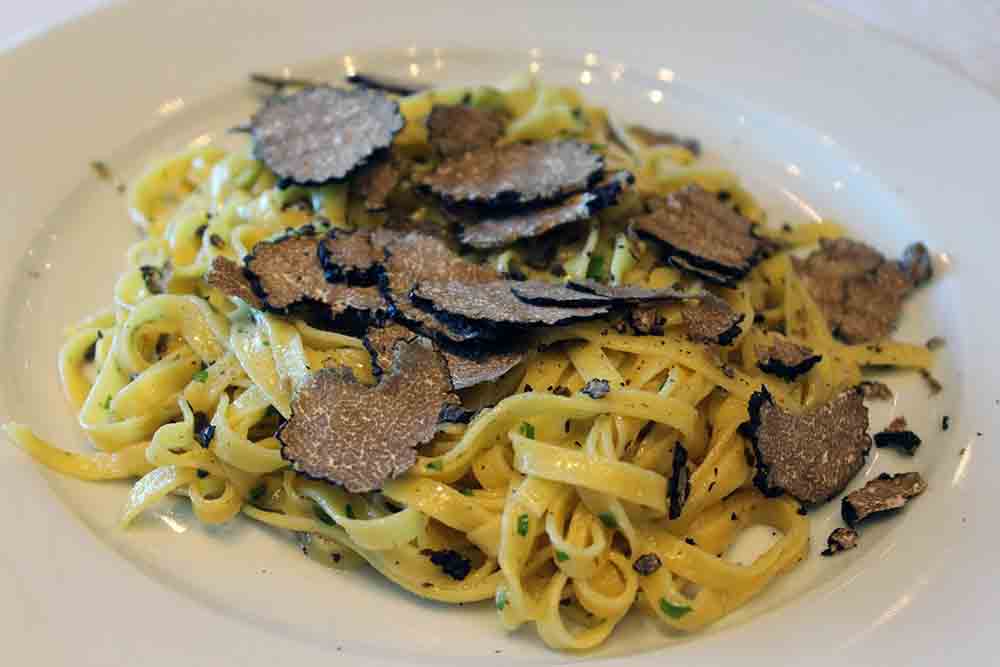 Back to the piazza. Car trunks become showrooms; brown paper bags tucked into bulging pockets are sample cases. A hunter opens his trunk and the unmistakable aroma of truffles explodes into the air. Buyers crowd in, and then disperse. Every trunk holds the three tools of the trade: an electronic scale, a calculator and a large amount of lira. The volatile truffle marketplace is cash and carry.

“Today, it’s a buyer’s market,” says a truffle dealer from Alba, who can sense that the prices are going down. “In my car”, he says, “There are seven kilos of truffles. If I see the market going the right way, I open my car and show my truffles because I can gain,” he says as we go for an espresso. The scene at 6:30 a.m. in the crowded Bar St. Carlo is straight out of a Fellini movie. The aroma of espresso, cigarette smoke, and the perfume of truffles, is intoxicating. A pistol-packing carabineer strides in for a quick coffee. Men sit at tables, sipping espresso, tacitly inviting prospective buyers to have a look/sniff of their truffles. 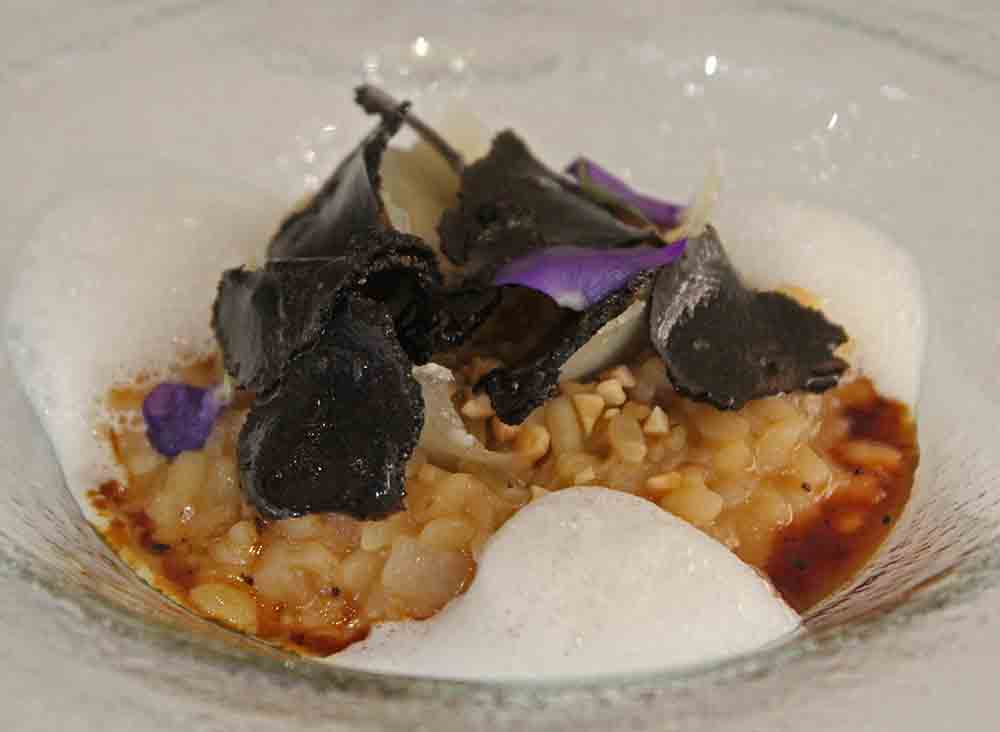 Truffles range in size from that of a walnut to as large as a grapefruit. Deals are consummated outside, around the corner, out of view. I did not see either truffle or Euro change hands.

In the ensuing days, I eat thousands of dollars worth of truffles, enough for a lifetime. I consider bringing one home, until I learn that a truffle transported to Canada without a license would need to be wrapped in cloth, packed in raw rice in a sealed glass jar to contain its perfume, and carried in my handbag. It would cross the Atlantic in the same way it grew: incognito, undercover and undeclared.