“The rain in Spain stays mainly on the plain.” My Fair Lady

Castilla y Leon, the two ancient kingdoms of Spain, sits on a plateau surrounded by mountains. And, true to its nature, during my visit it rained for a few hours each day. The locals say: “Nueve meses de invierno y tres meses de infierno,” nine months of winter and three months of hell.

The Golden Age of Spain reveals itself within a breathtaking landscape painted in broad brushstrokes. There are 8 UNESCO Heritage sites here. Cathedrals, museums and churches of staggering proportions are filled with ornate carvings and sculptures and dazzling walls, ceilings and altars embellished with gold, gold, gold! Yet, the underlying brutal history of religious zeal is not lost on us. Veni, vidi, vici. The Romans, Visigoths, Moors and Christian zealots left their indelible mark. As we travel through the provinces, a historical novel comes to life. 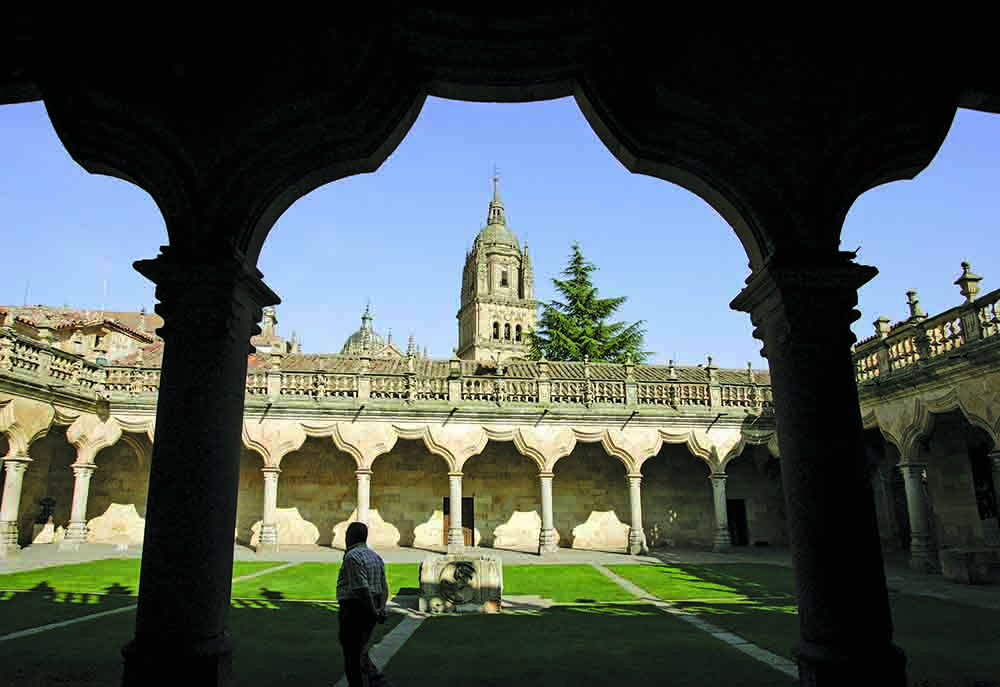 At the intellectual heart of Salamanca is its University. For four centuries it reigned as the world’s most prestigious University in one of the world’s most powerful nations. Christopher Columbus came here in 1486 and made an unsuccessful attempt to seek backing from the University for his search for the passage to India. Students did not sit at desks, nor did they write notes. They leaned on log perches and memorized the spoken word. There are several walls with names of successful Phd. students written in blood. Super-trendy in the 13th century. Walking through these perfectly maintained colonnaded halls, rooms and chapels is humbling; we’re aware that graceful restoration has erased the damage of the Napoleonic Wars. An ABC film crew has just finished shooting Still Star-Crossed, a new series set in post Romeo and Juliet times. The location is a building embellished with stone scallop shells, Casa de Concha, and it’s front courtyard. Much of the population of 160,000 is made up of foreign and local students and, on weekends, they’re out partying till the wee hours in the rabbit warren of tapas bars on San Justo and The Gran Via.

Lunch is at the outdoor terrace of Restaurante Don Mauro, in the sunny Plaza Mayor. We’re surrounded by huge stone buildings under the dour gaze of 60 faces of important figures in the country’s history. Wine is on the table here as naturally as salt and pepper at home. And the classic dishes have rightfully earned their reputation: hearty garlic soup with thick chunks of bread; jamon Iberico and local chorizo, lomo and salami. At Palacio de San Esteban, an ancient convent turned hotel, having enjoyed a splendid breakfast in what was once the church vault, I leave Salamanca feeling very virtuous indeed. 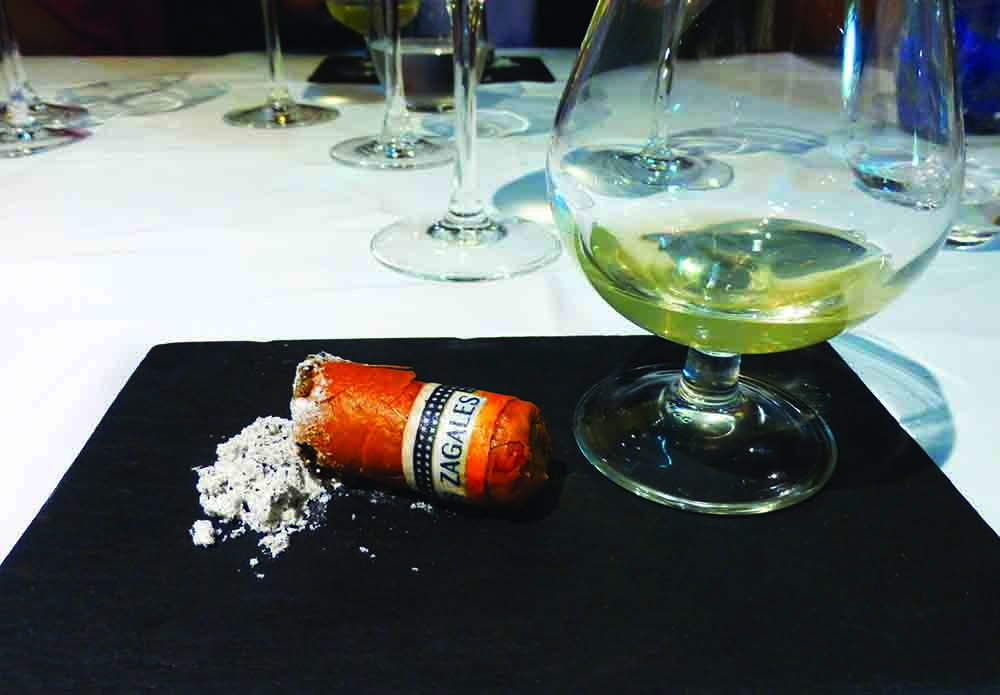 The kingdoms of Castille and Aragon were united in Valladolid, with the marriage of Fernando and Isabel, in a way, creating the origin of Spain. It was the birthplace of Kings, Philip II and Philip IV, and it is where Columbus died. The infamous Grand Inquisitor Tomas de Torquemada who convinced the King and Queen to make the Edict of Expulsion of the Jews from Spain in 1492, lived in Valladolid for a time. This is a city that in the 17th century vied with Madrid as the royal capital, but over the centuries, it’s palaces and grand streets disappeared. In a day, we did a walking tour of this capital city of the region and learned its significant history. A visit to the charming house and garden where Cervantes lived, with its polished wood floors, bookshelves and furniture was a highlight.

The culture is reflected in its architecture, food and wine, and its music. Tonight, we’re in luck. The Symphony Orchestra of Castilla y Leon is performing at the magnificent and modern Centro Cultural Miguel Delibes concert hall, and the acoustics are astounding. With souls soothed, it’s time to assuage our hunger. At Los Zagales, a table awaits. Wine and tapas. Even the table wines are great, as they should be, since viticulture in Spain goes back 6,000 years. This kitchen has wit. Our first tapas dish looks like a half smoked cigar, and really, its cured beef rolled around minced beef to be seasoned with herbal ash. Next is a small white bowl with a domed lid, named Obama in the White House. Under the lid is a poached egg and roasted black mushrooms. No surprise that Los Zagales has won many national tapas contests. It’s after midnight, and we’re still enjoying the wine and tapas, and in no hurry to leave. In the wee hours, the streets are still filled with people. It’s Saturday night in Valladolid.

Nomadic Welcome in the Mongolian Steppe 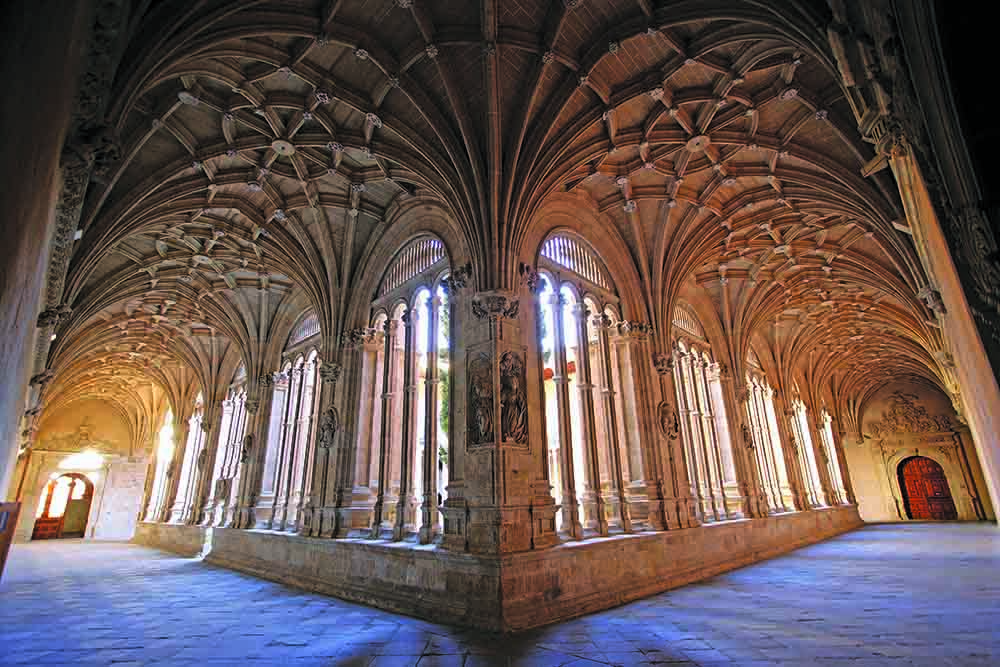 This medieval city of Burgos goes back to 884, and for those who are on the famous pilgrimage walk, El Camino de Santiago de Compostela (the way of St. James), this is an important stop. The city is dominated by the 13th century, UNESCO-listed Gothic Cathedral of St. Mary. We enter through the west side and marvel at the ornately carved twin spires, and once inside, the devout Catholics in our group are brought to tears in spite of themselves. And even for others like myself, to experience the ancient history of religious practice, to learn of the bishops and noblemen whose lives formed that history, is fascinating. The dome of the main nave features a Moorish-style vault and the 16th-century Italian Renaissance style Golden Staircase by Diego de Siloé. Within the immense sanctuary are 19 chapels in the side naves, and throughout are valuable altarpieces, paintings and sculptures. To see first hand the splendour that exists on every inch of this magnificent edifice is totally overwhelming. Legend has it that the 11th century hero, El Cid, is entombed here. We depart quietly and are grateful for the lovely walkway, the Paseo del Espolon. A stroll under the centuries-old trees, lined with pleasant shops and cafes, is a tranquil respite, and a good place for a much-needed glass of wine.

Entering the walled and turreted medieval city of Ávila through one of its nine gates makes me feel like I am on the set of a movie. Everything is so clean, the streets, the buildings and even the stone walls look as if they had just been built. Ah, no pollution here. On a Sunday we watch a Saints Day parade. A statue of the saint, dressed in colourful robes, is carried on a cloth-draped litter in the midst of a parade to the church doors. A bride and groom dressed for their wedding, wait patiently on a bench until it’s time for them to enter and have the marriage performed. A most interesting church is the Convento de Santa Teresa, which was designed as a convent for Carmelite nuns. The main feature of the interior is the room in which Saint Teresa was born, which has been converted into an opulent Baroque chapel. The altar displays an almost life-like statue of Saint Teresa depicting the moment of her vision of the Cross. The work is richly ornamented and adorned with jewelry and precious fabrics. In the naves of the church are countless beautiful sculptures. The tale of Saint Teresa is one of the most interesting of many fascinating historical stories. Walking along the quiet street on our way to lunch, I drop into La Flor De Castilla, a pretty sweets shop and buy a box of Santa Teresa candy. 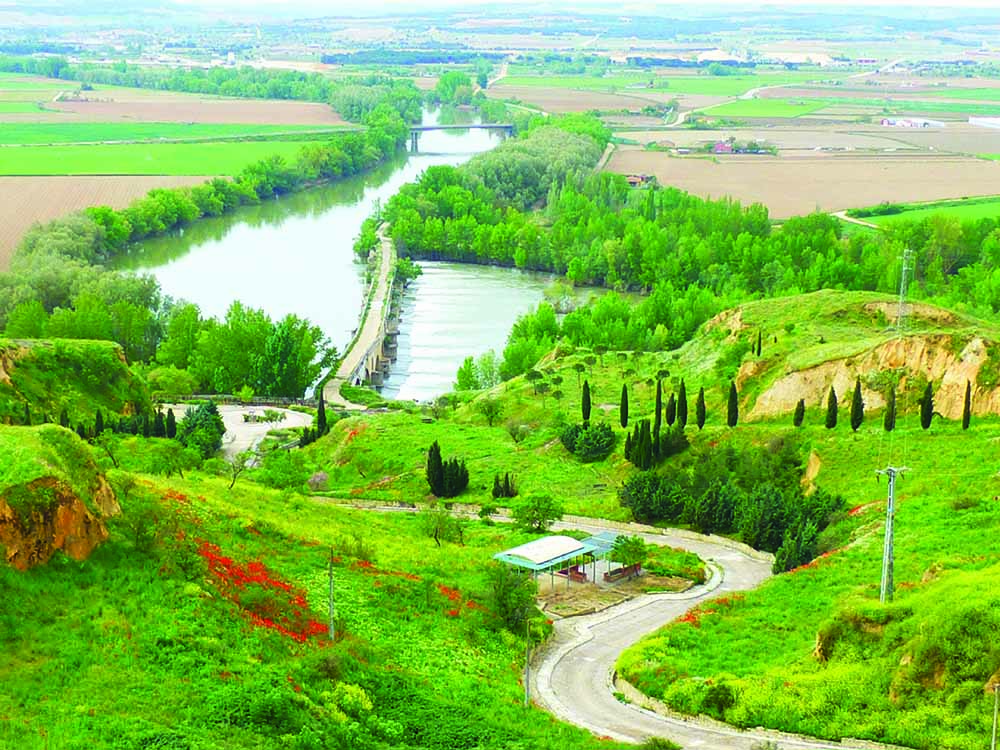 If you have ever wondered where storks come from, this species are happily alive and well in Castilla y Leon and build their giant nests of twigs and branches on church steeples. Scientists are perplexed as to why these giant birds have stopped their annual migration to the Sahara from which they usually returned by February 3rd. Can it be climate change, or have they, too, discovered that this beautiful lush land is a great place to live?