From the roof of Japan, the valleys below are draped in red maple and yellow ginko trees like the amazing Technicolour dreamcoat. Touring small villages and old postal towns along the rugged terrain of Nagano, we peel back time to glimpse enduring traditions and local hospitality. Two thirds of Japan is mountainous, but it’s in this central area where the Snow Monkeys have selected their residence—in the beautiful landscape of rural Japan.

Many visit Nagano to get out of the city and into nature, and fruit picking has become a popular activity. Cherries in June, peaches in August, grapes in early fall, and then, apples. Almost a quarter of all Japan’s apples come from Nagano, and the most prized are called Sun-Fuji. Often given as special gifts in winter, these large, shiny red apples seem like out of a fairy-tale. Their translucent golden honeycomb center is intoxicatingly sweet. For the apple-picking course at Shinshu Fruits Land in Shinshu Nakano I am handed a “special peeler” and unleashed into the orchard. No fruit is forbidden, and I can eat as much as I want. The apples here are so delectably honey sweet, and in Tokyo they can cost around $10 each. 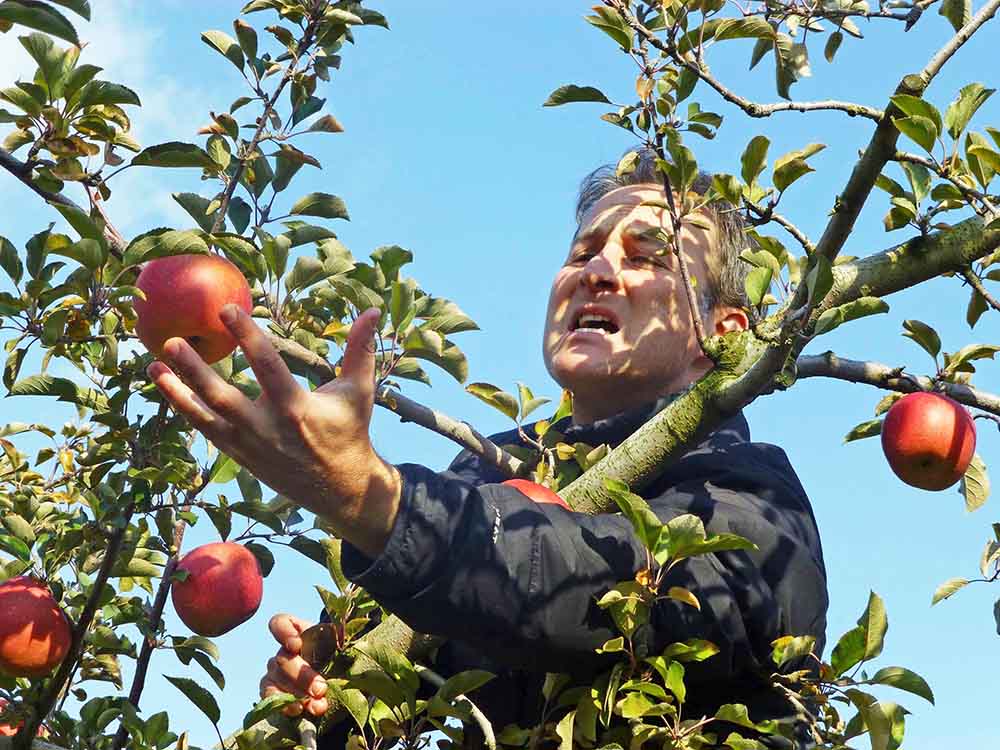 After apple picking we enjoy a warm and hearty local lunch. Lifting the lid off a steaming clay-pot reveals river-salmon poached in tangy miso paste with enoki mushrooms and thinly sliced apple. A Nagano staple, soba is served with citric yuzu spice and warm broth. Slurping is acceptable. They tell me that making noise when eating soba noodles is a sign of appreciation. Usually soba is eaten cold, but in the cool mountains, it is served hot. Mountain vegetables and mushrooms are mainstays of their clean local diet, and the people of Nagano boast the highest life expectancy in Japan.

Even the monkeys have got it good in the crisp mountain air of the Japan Alps. Once upon a time, like a scene out of a Planet of the Apes, monkeys descended from the trees high up in the mountains and into the hot springs below to stake their claim. Now, the hot baths of Jigokudani belong to them. When the temperature drops, they plunge into the hot water to pamper and groom each other. We hike for half an hour along an ascending wooded path to see them. My initial apprehension of being completely surrounded by Snow Monkeys is relieved by my sense that they’re probably the most relaxed monkeys in the world. While they are aware of us, they’re happily preoccupied lazing the day away in their own natural spa. Snow Monkeys are the kings of their domain. 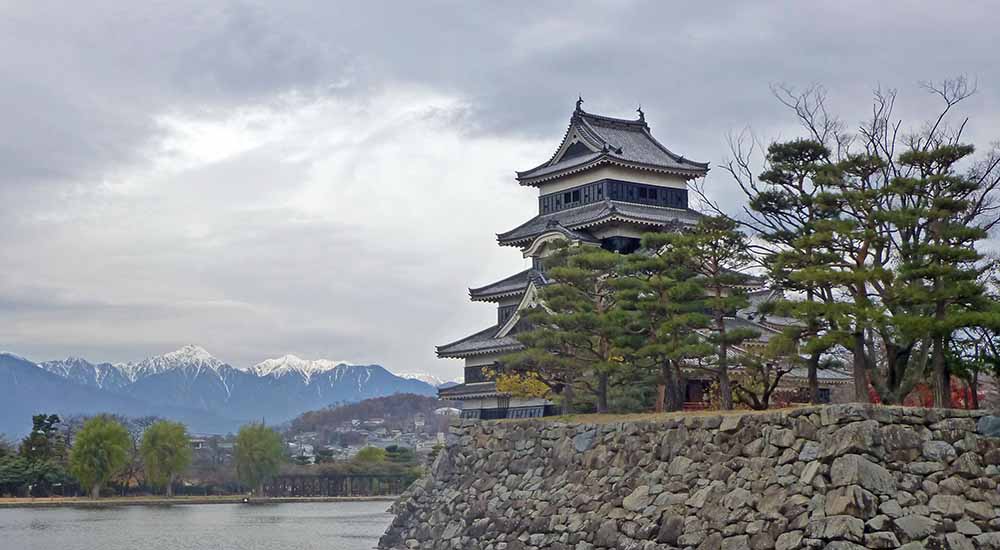 No one has ever lived in nearby Matsumoto Castle. Never used as a residence, the local rulers maintained it as a military fortress. They fired their bows and guns, and threw rocks down on their enemies. Square windows were used for muskets; rectangular ones were for archers. Known as Crow Castle because of its black walls, it was meticulously built with joints not nails, and is in mint condition. Inside we see the munitions and samurai armor of a bygone era. 7000 samurai once surrounded the oldest castle tower in Japan. Today it is a national treasure. The stairs up the six floors are very steep. On the top floor the warlords would meet to strategize. Looking out, as they did, we can see for miles—the clear moat below, the lush expanse of land stretching out into the distance, and the snowy mountain peaks that crown the valley perimeter along the horizon.

We’re offered delicacies of Matsumoto: washed and boiled grasshoppers and bees roasted in soy sauce and sugar. I take a pass. Outside the city, in the Hotaka area of Azumino Valley is the Daio Wasabi Farm, the largest wasabi farm in Japan. These fifteen hectares of Japanese horseradish produce five hundred kilos per day to an annual yield of one hundred fifty tones per year. The fields of green roots with pretty watermills look deceptively sweet, but are sinus-burning hot. We sample wasabi treats from lollipops, cakes, potato croquettes, frankfurters and ice cream to a refreshing but spicy juice. 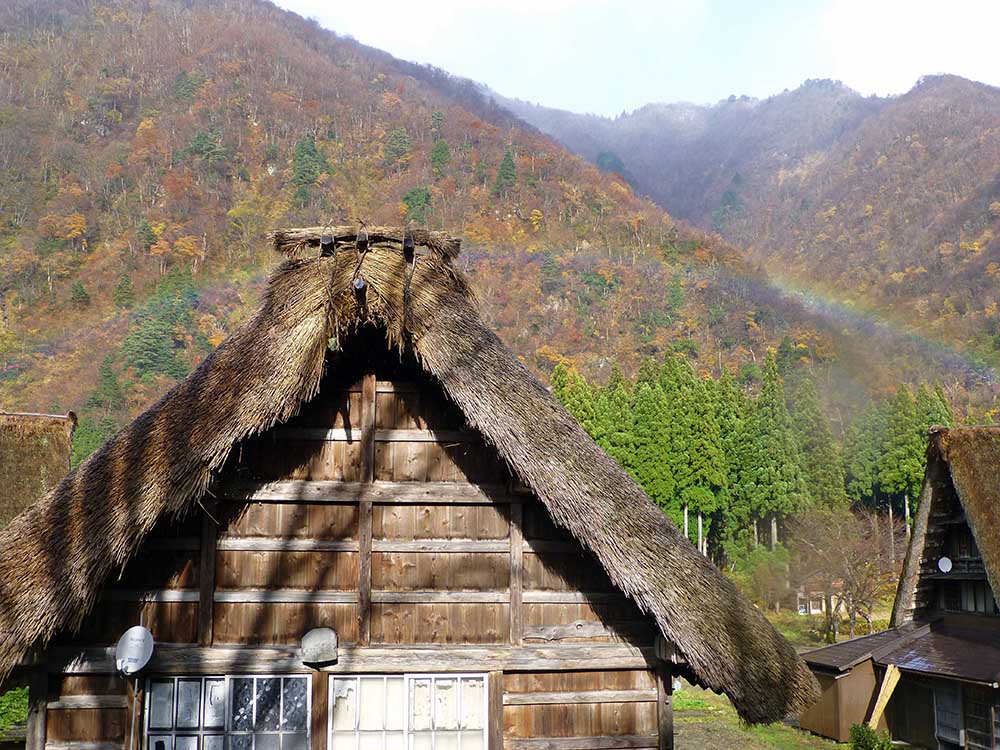 Old folktale villages like Shirakawago and Gokayama in neighbouring Gifu and Toyama prefectures dot the countryside. These UNESCO World Heritage sites are fairly isolated. Time was, prisoners who were banished from the rest of civilization were sent here. Their thatched roofed houses are shaped liked the cupped hands of one in prayer. Locals cultivate silkworm and make rice paper. Quiet and remote, we feel so far removed from the high octane pace of Tokyo just a few hours away.

Hida-Takayama, a nearby town in Gifu, is a wealthy merchant town from the Edo period that has preserved its traditional character. Strolling the narrow Sannomachi Street we find centuries old trinket shops and sake breweries where we can sample and compare premium artisanal sake with notes of cantaloupe and banana. The key ingredient is the water, and its purity can be felt in every sip. What piques my interest though is the prized Hida beef. Distinguished by its high quality marbling, luster and texture, the juice and aroma in each mouthwatering bite are robust. Various shops grill skewers of beef sold by the grade of their firmness. Local sake can also be sampled at many shops, and we taste them all to compare the notes of melon and banana in each artisanal bottle.

At the end of the day, the best immersion into the culture of this rural region is a sojourn in a ryokan. The Imperial Family frequents the resort town of Karuizawa, and the Hoshinoya Resort is the height of luxury. Sipping green tea on the porch of my private villa at Hoshinoya between the floating lanterns below and the starry night above, I recognize that Japanese hospitality is not merely about making you feel at home; it’s about making you feel welcome in their home. The focus here is on embracing simplicity, and relaxing the body, the breathing and the mind. From nature walks that trace the migration of birds, frogs and bears, to midday exercises and teas, I, slowly but surely, unwind. In the evening, before shuffling off to sleep, I enter a Meditation Bath. Wading into the hot spring, I glide through a dark corridor and into a pitch-black room. Faced with my fear of the unknown, I focus on the soft music of the Japanese samisen guitar and the warm still water around me, eventually liberating me to a complete calmness.

Away from the high-tech city life, the Japanese way is not one of opulence, but rather of an appreciation for austerity, and a shrugging off of all the unnecessary clutter. From cherry blossoms to fall foliage, the glittering night skies and crisp mountain air, a trip through the Nagano region of the Japan Alps is a reinvigorating journey to well being.