One cannot imagine Canadian Icewine without Donald Ziraldo. He raised the industry from its infancy to its current standard of excellence for which Canada is so proud. Founder and former president of Inniskillin Wines, he now runs the inimitable, Ziraldo Wines; has held numerous directorships and chairs including the Founding Chair of the Vintners’ Quality Alliance 1988-1995; and is current Chair of the Vineland Research & Innovation Centre Board. Ziraldo consults on an advisory basis for various disciplines within the wine sector, and is the author of Icewine; Extreme Winemaking (2007, in book stores now). Born in St. Catherines, Ontario, he is the recipient of the Order of Ontario in 1993, and the Order of Canada in 1998.

Adam Waxman: In addition to stewarding Canada’s wine industry from its infancy to an internationally recognized wine region, you have also chaired the Vineland Research and Innovation Center Board to cultivate other industries.

Donald Ziraldo: Vineland Research and Innovation Center allows me the opportunity to work with brilliant scientists from Canada and around the world on research and innovative ideas that are cross disciplinary. For example, doing research on growing hazelnuts in Simcoe region, tobacco country, where tobacco farmers are losing their market—for Ferraro chocolates—an Italian company with a $300 million plant in Toronto—to replace 12 million pounds of imported hazelnuts from Turkey.

There is the utilization of genetic sequencing to assist in selecting new clones of Vitis Vinifera grape varieties that are disease resistant and/or cold tolerant. This technology also applies to flowers in greenhouses—an industry that is five times the size of the wine business in Niagara. There is also the Highway Beautification Project where we are working with Landscape Ontario and nurseries to not only beautify the highways in Ontario, but plant trees as “carbon sinks”, sound barriers, and buffer zones, and generally improve the visuals along our highways.

My involvement as director at Shaftsbury Films with Christina Jennings afforded me an entirely different interest in a fascinating business, which you can relate to as an actor.

AW: You have such joie de vivre. What inspires you?

DZ: I grew up on a farm in an Italian culture and have always been motivated by the finer things in life as I learned them from my Mom and Dad. My Dad used to say things like “if it’s worth doing, it’s worth doing well”. My other favorite is “if you are going to drown, drown in the ocean—you look stupid drowning in a puddle”.

AW: Is there a philosophy to which you adhere, either in the context of your work, your life, or your winemaking?

DZ: Enjoy life to the fullest—whether it is in work, on the ski slopes, inspiring young people to be great, or helping friends. Mostly I love a challenge. As my wife Anna says: “if you want Donald to do something…tell him it cannot be done”. My other philosophy is: “an Italian race car driver walked around his Ferrari before the race, checked everything, sat in the car, looked up, ripped out the rear view mirror and said “what-is-a behind a me is not important!”

AW: You once said that “winemaking is not a job; it’s a way of life”. After stepping away from Inniskillin in 2007, it wasn’t long before you returned to making wine. What was the catalyst for that?

DZ: When this juice became available, I was so impressed with the quality of it. Because of the heat of the 2007 vintage, there was a wonderful peach aroma to the Riesling Icewine. I started thinking about the whole idea of doing my own brand just as gifts really, but then I thought, well why don’t I just get back in the business? It kind of evolved. I don’t think there was any strategic plan per se. it was more about being drawn back into what I love doing.

DZ: Riesling is the noble cépage for Icewine. Vidal, I can buy anyplace anytime; there’s a lot if it around; it’s easy to grow. I wanted to plant Riesling and also do some research. I planted five clones from Germany, New York State, and Canada on four different root stocks to see how they would perform. 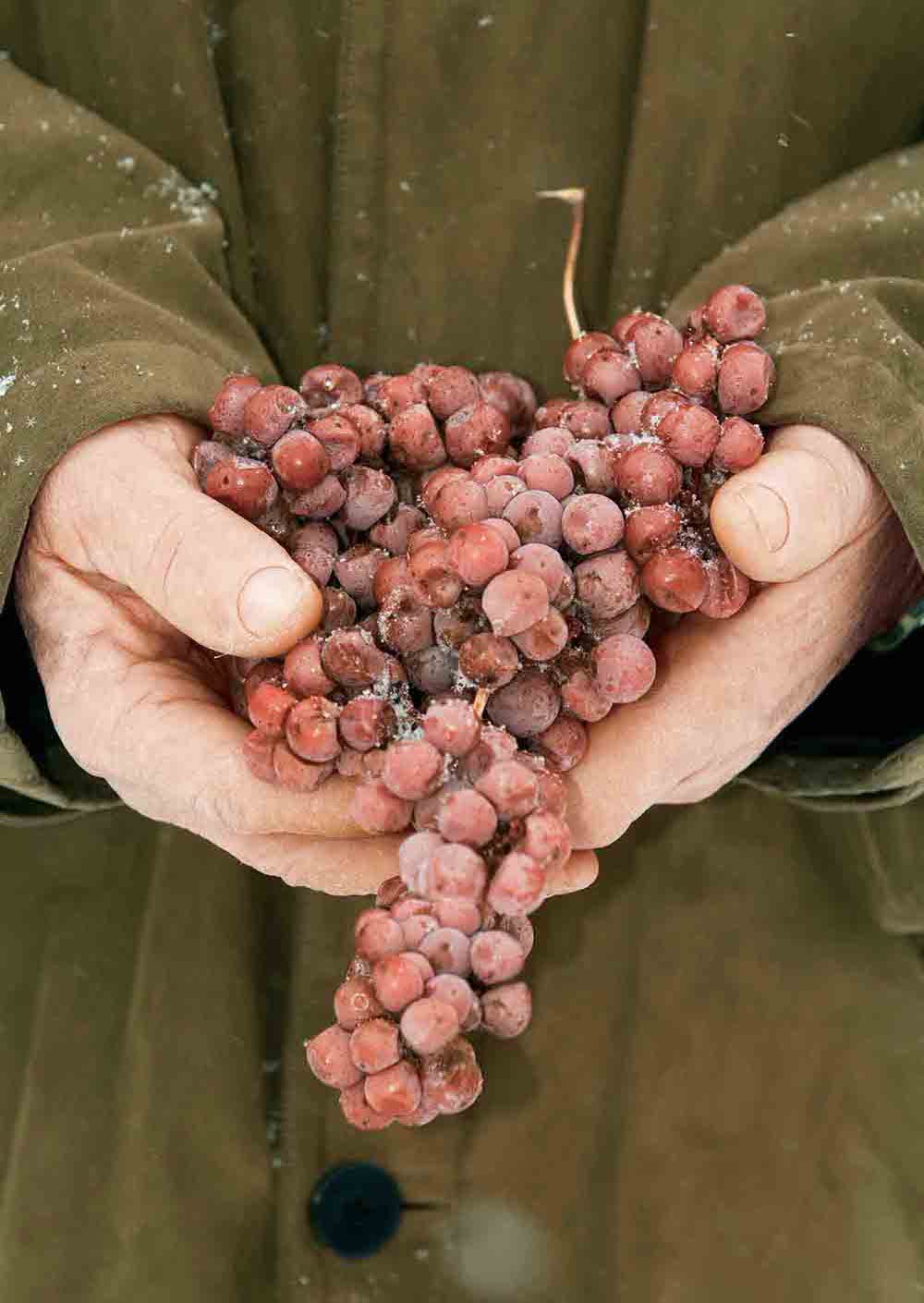 AW: How did they perform? Was the result different from what you created in the past?

DZ: I intentionally tried to stylize it differently. It’s very low in alcohol—around 8%. And there is a peach aroma that I’ve only ever known in our Dark Horse vineyard in the Okanagan.

AW: What other characteristics distinguish this Icewine?

AW: Where is your vineyard?

DZ: The vineyard is in the original Inniskillin site in Niagara where Carl and I started in ‘73/’74, right by an old packing shed. I bought it in ‘71 to operate as the nursery; and replaced a cherry orchard with Riesling grapes. I only planted one hectare. It’s small. There are about five acres, but only one hectare is plantable.

AW: Are you going to continue making only Riesling, or will you incorporate other varietals as well?

DZ: I’ll do a Vidal, because it is very Canadian. It has its own unique identity that we develop in Canada, and I think it has really become identifiable as Canadian Icewine. Riesling is the traditional one from Germany, so I’ll definitely do a Vidal, and maybe a Cabernet Franc, because there is a lot of interest in that—but first I’m going to see what kind of feedback I get from the trades people, the professionals, and the public.

AW: What do you think we should expect from your Riesling Icewine?

DZ: It’s a great value. It’s no longer fashionable to be paying big bucks just because something is special. So I would expect that people will be blown away by the quality and the price value. What I’m hoping is that people will buy it, and it will be gone. Then they will have to go to restaurants for it, which has always been my focus—to build my business in restaurants. Restaurants have always been good to us right from day one.

AW: Other than at restaurants where will it be available? 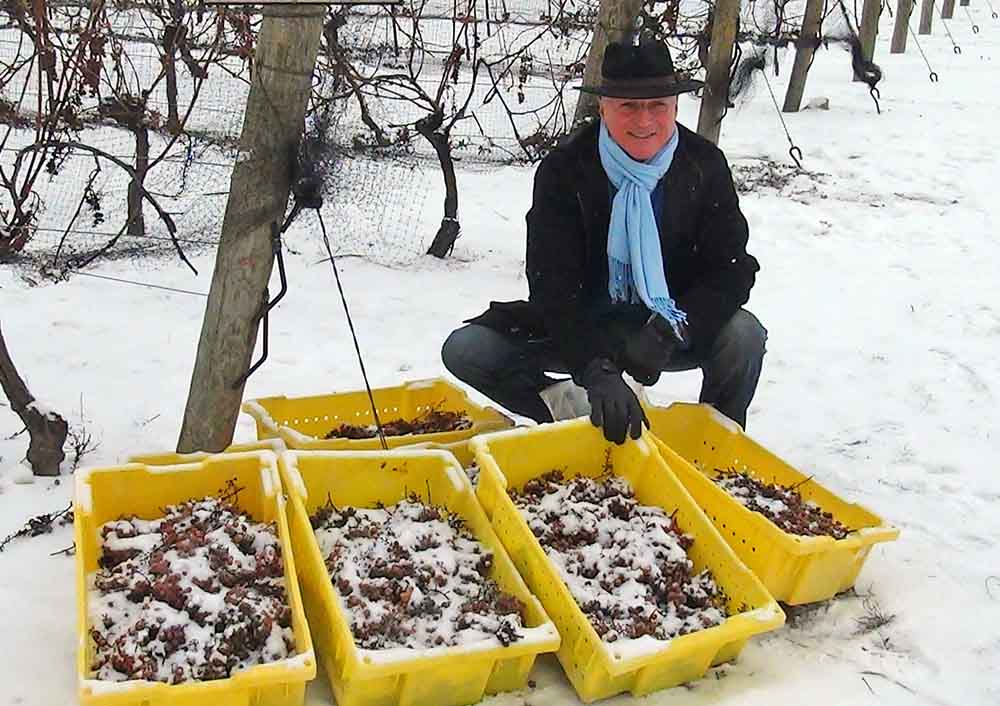 DZ:It will only be available in Vintages, and in Ontario there are only about twenty stores. After that it will be available in some restaurants. I don’t have a retail outlet—I don’t have a winery per se, so they didn’t give me a retail license. There are only about fifty cases for the whole province, so after that you’ll have to go to Hong Kong or Paris.

AW: Why Hong Kong or Paris?

DZ: Hong Kong is the centre of Asia. Japan helped us grow, but I didn’t find the right distributor there. I did have the right distributor, a friend, in Hong Kong. Another friend, and former associate, is distributing it in Paris, which is the wine capital of the world. It was his idea to introduce our Icewine to the Vin Expo back in 1989.

Twenty years later, from his original vineyard, and his unquenchable thirst to discover and perfect that to which he has devoted so much of his life; Donald Ziraldo returned to focus on what he loves doing best: introducing to Canada and to the world, a beautiful, new and unique, world class Icewine.