“Detroit Versus Everbody,” the signs read. The feeling is palpable, like a massive defibrillator applied to the pulse of the urban grid. It’s that indefatigable American spirit reignited. This is the home of Ty Cobb’s bat and Gordie Howe’s slap shot; captains of industry from Ford to Boeing; and the indelible musical footprints of Motown, Techno and Hip Hop. Once the largest European settlement between Montreal and New Orleans, code-named “Midnight” on the Underground Railroad. Once a crucible of musical genres churning out icons from Diana Ross to Alice Cooper and Bob Seger to Eminem. Once the machinery of American industry–an economic powerhouse-turned-collapse. Now, under-populated but reconstituted, a proud energy has galvanized to burnish this storied link in the rust belt to unique and exciting luster. “We’ve got nothing to prove to anyone but ourselves,” shrugs a bartender with a smile.

Detroit was a centre of jazz and blues until Barry Gordy added Motown to the mix. Together with Smokey Robinson, Gordy changed the way musicians would look, move and sound, and transformed a community of inner city youth into polished superstars. Their signature rhythm and smooth sound expressed a social conscience and spoke to the hopes, dreams, fears and angers of the civil rights movement and the Vietnam War. Touring the Motown Museum, we’re awestruck by the majestic fashion, synchronized dancing, and layered harmonies that heralded, as Aretha Franklin enthused, “Here we come!” We learn the dance steps of the The Four Tops, and sing The Temptations’ My Girl in the very same recording studio where The Supremes, Stevie Wonder, Marvin Gaye, The Jackson Five and so many more musical icons churned out hit after hit, earning the moniker, “Hitsville USA.” And how were these hits determined? As a company, all the artists would gather in the boardroom to vote, as Gordy would ask them, “Would you buy this single or this sandwich?” 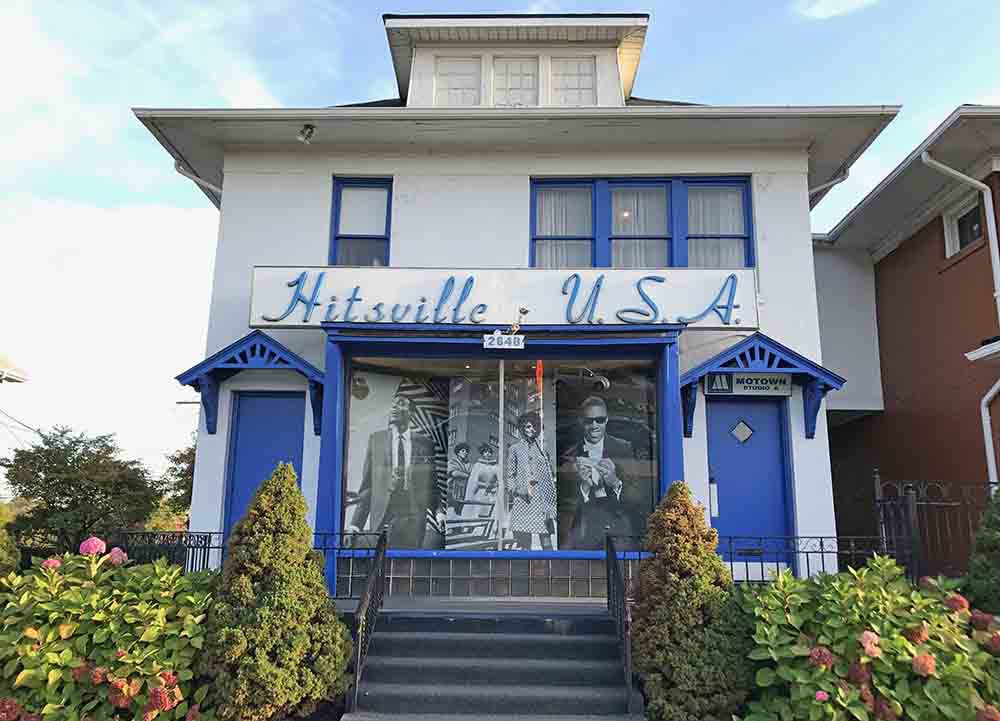 Music and art have always been the voice of Detroit. Diego Rivera’s famed Detroit Industry Murals in the marble court of the Detroit Institute of Arts is a flowing sermon on the intersection of capitalism and communism. Awesome and foreboding, the intricacies of each fresco depicting the Ford production line meld with Diego’s dream of integration. His critique of political and socialist realities was created for the museum, in the museum, as part of the museum.

The Art of Rebellion: Black Art of the Civil Rights Movement exhibit at The Charles H. Wright Museum of African American History commemorates the 1967 Detroit riots, and presents the artist as witness. This politically conscious art, rooted in culture and lived-experience, reclaims representations of African Americans. It asks us to consider how the word “riot” has cultural bias that minimizes the struggle of a people against oppression; and to think critically about the semiotic differences between the words “riot” and “rebellion.” A photo of a young African American man, hands clasped behind his head, forces us to confront how our personal histories inform our perspective of this gesture. Is he just stretching his arms or is he being held at gunpoint? Not for the faint of heart, a didactic history of American slavery leads us through to issues facing the black community today.

Through outdoor installations Olayami Dabls creates immersive public spaces that connect the dots between cultures. His African Bead Museum employs iron, rock, wood and mirrors to convey the human condition, but it is the colourization of a neighbourhood, mapping African traditions onto exteriors, that creates powerful, yet approachable statements of inclusivity through diversity. Inside Mike Kelly’s Mobile Homestead at the Museum of Contemporary Art is the artist’s interpretation of his childhood home. Album covers, posters of punk music and comic art by renowned artist Savage Pencil paper the walls. Through my old teenage lens I immediately identify the attitude of “music as resistance.” The N’Namdi Center for Contemporary Art displays the mesmerizing multi-disciplinary work of Elias Sime. Reclaimed electrical components on fiberglass panels include experiments with a variety of materials from discarded cell phones to ants. 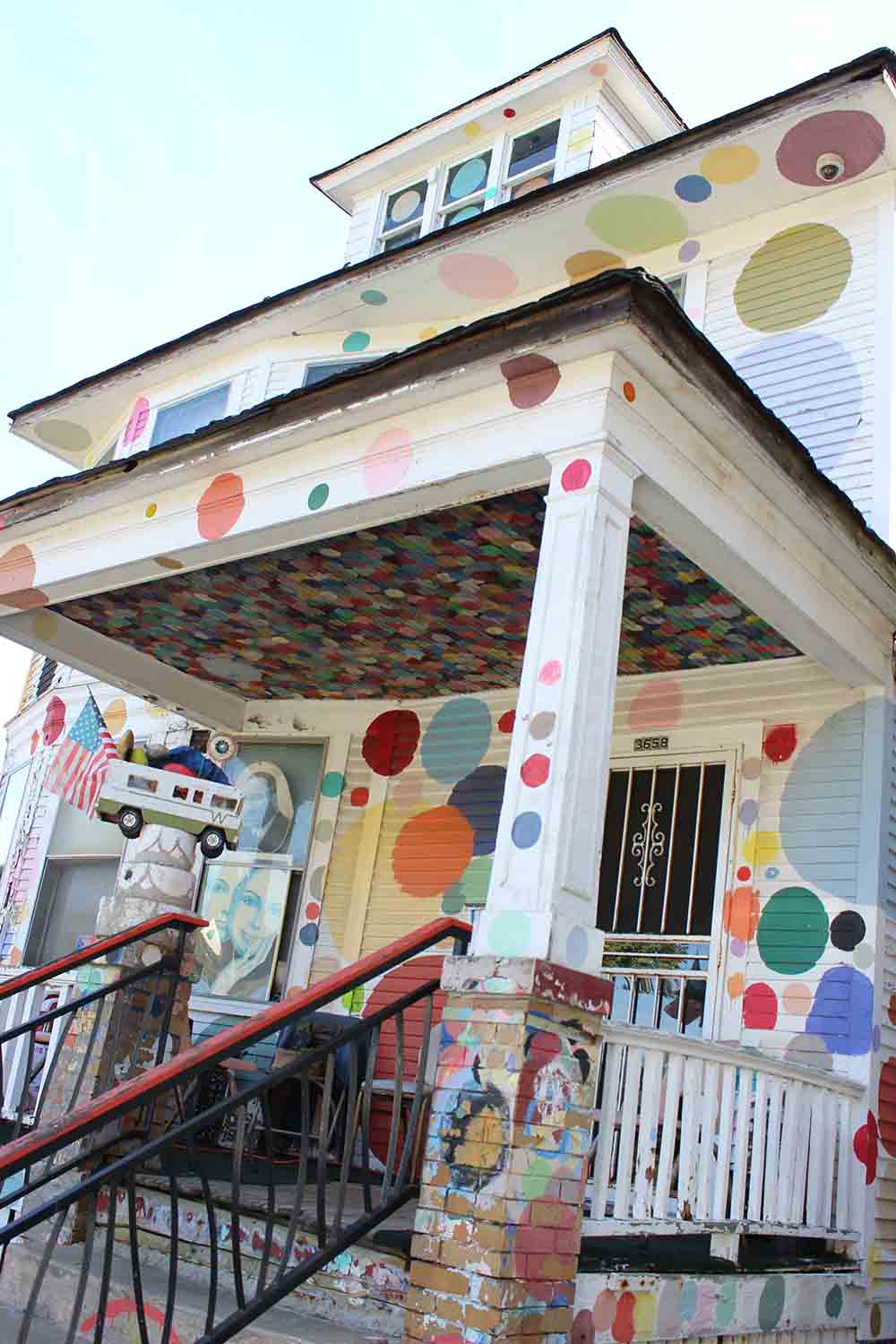 “You wanna sign my house?” A voice calls from a yellow porch. “It’s only a dollar.” Ms. Bell’s Yellowhouse Guestbook borders a cosmic dystopia of junk art and graffiti. This is the Heidleberg Project. Houses painted in balloons and numbers line a chalk-marked street with clocks hanging from trees in a dalliance with Dali. A pink jeep is submerged in the grass near a motorboat brimming with stuffed animals. A road paved with 30, 000 sneakers is punctuated by a lone television set. It’s a post-apocalyptic artscape assembled from whatever people left behind. Driving through an underpass to Lincoln Street Art Park, a spray-painted warning reads, “Danger! Reality Ahead.” The scene feels like Mad Max meets Peter Max as the inner city itself is a canvas draped in colour. The Belt, a lit up downtown alley, is colourized and bustling. We duck into Standby for a cocktail.

Behind the bar a centrifuge clarifies cocktails on draft, like a Black Rye of whisky and homemade coffee tonic with chocolate bitters and marshmallow. Thirty different botanical syrups are made in house. I wonder aloud if they’re actually chemists posing as bartenders. “Detroit is a smaller market, so we’re forced to think outside the box, be creative and different,” the bartender tells me, as he prepares a Snake in the Grass by freezing mustard greens with liquid nitrogen, muddling them into a powder, and adding celery bitters, lime and local gin. Cocktail culture in Detroit is a science. At the Sugar House, bartenders seem like apothecaries. The menu is an encyclopedia of 101 classics, and those inspired by great American novels. My Detective Inspector of maple, lemon bourbon, a dash of peaty scotch, black strap rum and a torch-lit sprig of rosemary is a multi-sensory experience. “I want what he’s having!” I hear from a few seats down the rail. I look over and acknowledge, “I want what she’s having!” An EFK of black tea-infused bourbon, lemon simple syrup and angostura bitters is smoked in a bottle of hickory and presented with a delicate lemon expression. We drink with our eyes first.

“It takes a certain grit to exist here; you’ve got to have some gravel in your teeth” advises Chef James Rigato. “But if you’re an independent person, you can make an impact, because right now Detroit is affordable.” The Eastern Market is teeming with activity, and what is immediately apparent is the number of young people involved in urban farming. Michigan is the second most agriculturally diverse state in the union. There is a lot of space for farming and an active local food scene to support it. Aspiring chefs and farmers network through the market’s Detroit Kitchen Connect to use the community kitchen and start up their own food business. We savour massive pickles as fat as ballpark hot dog buns, thick and crunchy Detroit-style pizza, and an array of dips and spices from emerging Middle Eastern communities. We cannot leave without Aunt Nee’s fresh vibrant salsa, and a luscious sliver of Love’s Custard Pie’s Chess Pie. Across the street are row upon row of murals, in front of which mellifluous sounds of buskers with horns, keyboards and slide guitars coalesce with beckoning aromas of barbeque smokers cooking up meaty ribs and turkey legs. Behind Bert’s Warehouse, a giant mural of D12 and Eminem is the backdrop to outdoor karaoke. Discovery is around every corner.

“Our restaurant is like a jam band,” says Chef Rigato of Mabel Gray. “We kind of have a beat, a tone and a tempo, and we change the menu every day.” His modern-local menu bursts with flavour arrangements like Honeycrisp apple kimchi with spiced candied cashews and Greek yogurt; or mushroom Carpaccio drizzled with pesto and lemon vinaigrette and a crumble of pine nuts; and a twine of fresh fettuccini enlivened with duck confit, Swiss chard, macadamia nuts, a splash of preserved lemon and shaved pecorino. Detroit has deep pockets of ethnic communities with proud culinary traditions. Hot new restaurants take the tried- and-true and elevate them to match today’s global tastes. Grey Ghost treats lamb tartare to a zingy apple tzatiki. Shaved bologna, seared crisp, sits on a crunchy cheddar potato waffle, and is topped with a cream cheese fondue and a dollop of jalapeno jam. Baklava shards folded into toasted sesame frozen yogurt over hazelnut cake are spiked with honey meringue, crumbled pistachio and pulled cotton candy. Chef Andy Hollyday’s Selden Standard is the talk of the town. His “New American” cuisine sings of sweet golden beets, roasted and cradled in a crunchy medley of kohlrabi batons and pumpkin seeds on a smooth puree of avocado, while a wood-fired grill chars octopus, smoky lip-smacking lamb ribs and whole trout to light and crisp perfection. 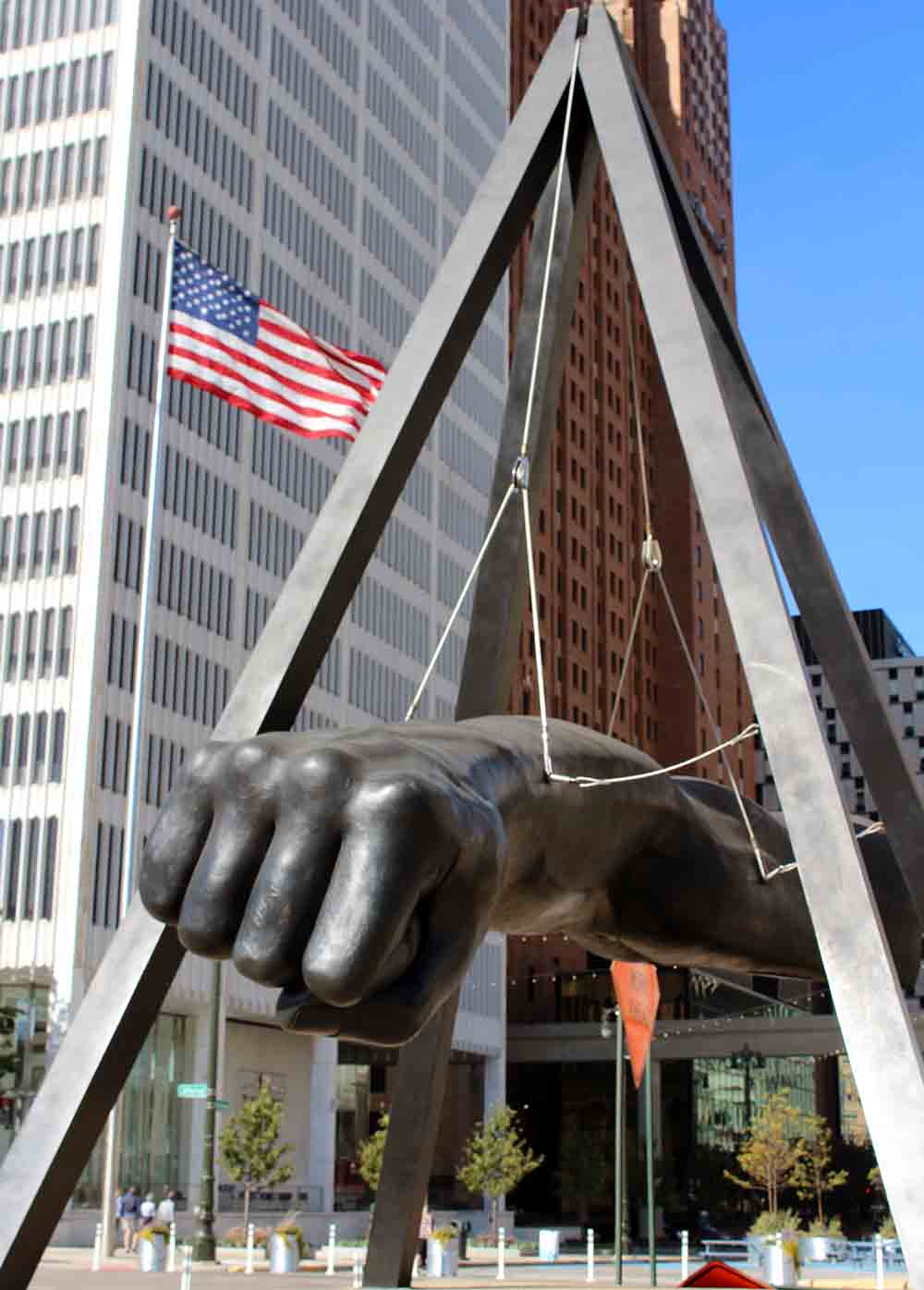 Detroit’s social fabric is personified in all its art forms: from architecture that frames moments in time, and painted canvases that bear witness to them, to colourful installations that re-purpose them; and from local ingredients farmed and foraged for eclectic palates of diverse communities, to beautifully packaged socially conscious music from the streets to the burbs. It’s a patchwork of history, culture and ethnicity woven into the rich tapestry of what is happening right now.