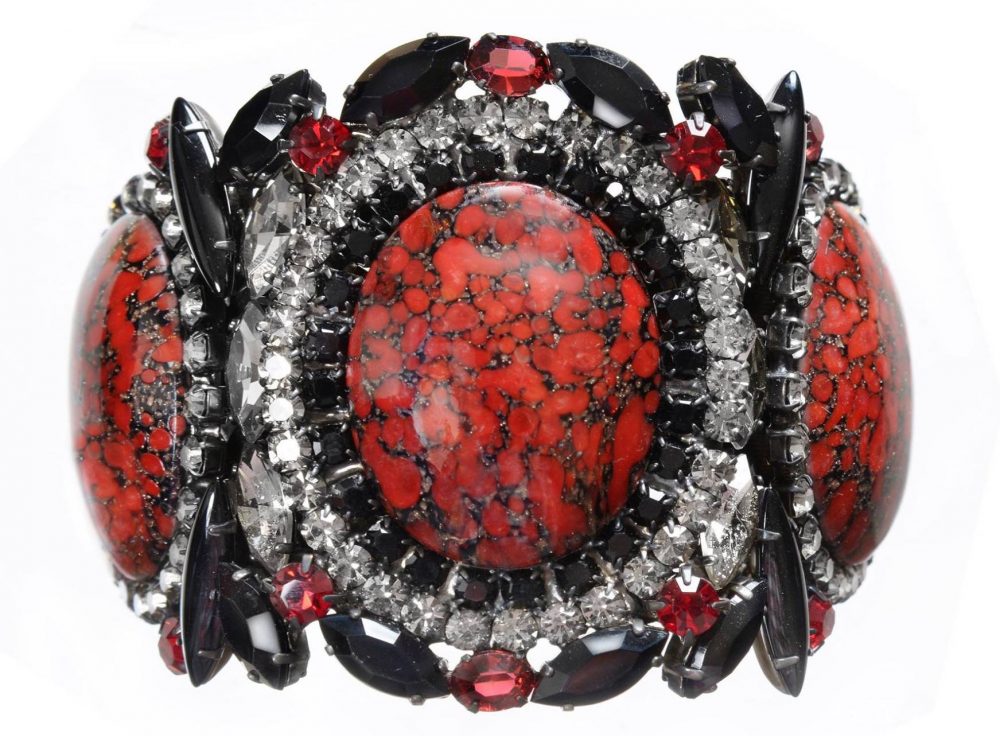 If Canadian jewellery designer Alan Anderson had his way, women would wear his bold, statement jewellery to the grocery store. While his pieces have adorned magazine covers around the world, been worn by celebrities and Hollywood royalty – Elizabeth Taylor owned a cuff – Anderson is happiest to see women wearing his pieces during the day, for no special reason other than their own desire to feel good… and stand out.

You were a successful senior visual presentation technician for a major department store. Why did you start designing jewellery?

It was a trip to Rhode Island with a friend and prominent costume jewellery designer, Robert Sorrell – who did Thierry Mugler’s runway jewellery – to source crystals for his pieces. I was absolutely crazed by the crystals and stones. I bought rhinestone chains, settings and stones, but had no idea how to use them. So I sat at my kitchen table, night after night, teaching myself. The work on some of those pieces looked like someone took a pastry bag full of solder to them.

You still design by hand…

In my Toronto studio. There are no molds and I don’t sketch. Rather I work from an image in my head then sit with clay, vintage stones, copper findings and a hot soldering gun to create one-of-a-kind pieces.

Why costume jewellery? Why not fine jewellery working with gold and diamonds?

I find fine jewellery boring and small. I like the scale of stones and “show” of big, bold costume jewellery. I recently heard an expression in Dallas, Texas – “If you can’t see it from the highway, don’t bother wearing it.” Perfect.

What inspires your creations?

I have vivid memories of my Auntie Marie, my mother’s sister, stepping off the plane from England in full finery and pounds of jewellery – both costume and real, including a 10 carat emerald ring that she bought in Istanbul. She was friends with Norman Hartnell, the Queen Mum’s clothing designer and so “over the top.” I also love the glamour of 1930’s Hollywood and those sirens who commanded the silver screen. And of course vintage Cartier, the pieces of Paulding Farnham who worked for Tiffany at the turn of the century and Fabergé for the Russian Imperial Court.

How did Elizabeth Taylor come to own one of your pieces?

I received a call from Harrice Miller, the woman curating the Elizabeth Taylor collection for Christie’s. She inquired about a purple bracelet I had made for House of Lavande in Palm Beach in 2005, but wouldn’t give details. At that time, House of Lavande was working with Henri Bendel’s in New York so I believe someone bought it there and gifted it to Dame Elizabeth. It was only when the Christie’s catalogue for the Elizabeth Taylor auction came out, that I knew. Shocked! Thrilled!

My collection is about big bold, statement pieces, interesting colour combinations and rare vintage materials. It’s kind of Cartier-meets-Aladdin’s treasures, but with a modern twist. There are basics, but each season has its own punch of colour, and I usually don’t revisit them, just because of the availability of the materials. Once a wonderful vintage stone is gone, it’s gone.

I think that it’s handmade, like a couture dress. It’s not mass produced or made in a factory. And, it is truly a Canadian brand. I’ve discovered there are a lot of women, from age 16 (our youngest client to date) to over 80, who just want something unique. They have no desire to ‘blend in.” In the 1950’s there were about 1000 craftsmen in North America who made this type of couture costume jewellery. Today, there are only about seven of us, so I really feel I am keeping a craft alive.